LAWRENCE — You’ve driven a car a million times, so nothing here should be too different. Just climb into the Acura, buckle up, throw it in “drive” and stomp on the gas.

At once familiar and yet fully surreal, taking a spin in the state-of-the-art Driving Simulator Lab in the Department of Civil, Environmental and Architectural Engineering in the University of Kansas’ School of Engineering sets participants into highly realistic driving scenarios. 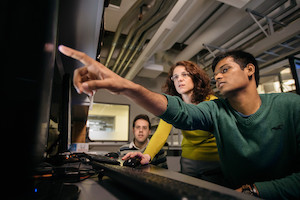 Investigators across multiple disciplines are putting the simulator in the KU Transportation Engineering Analysis Laboratory to good use, researching driver behavior, psychology and distracted driving, as well as traffic engineering, signal control and the gamut of new technology appearing in modern vehicles.

Two CEAE professors, Alexandra Kondyli and Steven Schrock, are leading work with the new simulator, which was made possible by the School of Engineering and the CEAE Department, along with Dr. & Mrs. Tom Mulinazzi, Affinis Corp., GBA and Honda R&D Americas Inc.

“The driving simulator for KU is a huge step forward for the Transportation Engineering group and the Civil, Environmental and Architectural Engineering Department and the School of Engineering,” Schrock said. “Within a few seconds of driving, all of your experience as a driver kicks in. And within a few minutes, you feel like you’re actually driving a car. So that’s the real advantage of this over if we had a platform that was just a computer screen and a toy steering wheel in front of it. You’d never get that immersive experience.”

“The driving simulator is a great tool to study driver behavior and driver safety,” Kondyli said. “It has four screens — three screens display the front and one screen for the back. It’s hosted in an Acura MDX cab. We study what drivers are doing, how drivers are driving, how they react to any stimuli that they see on the roadway. What are the differences in drivers between age groups, between male or female drivers — both in terms of how they’re driving and also to what they’re reacting to? We can study how drivers drive in different geometric designs and see how safe or how unsafe they are. There are so many possibilities for studying driver behavior in general.”

Kondyli is collaborating with the psychology department at KU in a project for the Mid-American Transportation Center, looking to define aggressive driving from a psychological perspective.

“We’ll quantify exactly how aggressiveness translates into how people drive, both in terms of traffic operations and also in terms of their safety and risk-taking behavior,” she said. “We’ll be looking at what kind of gaps drivers prefer depending on their attitudes and behavior — what lane changing decisions they’re making based on their behavior background. This research will help us better model what an aggressive driver is, what a conservative driver is, what an average driver is. Right now, we really don’t know how driver behavior translates to quantitative information and to risk-taking maneuvers on the roadway.”

In another facet of research conducted in the new lab, Schrock uses the simulator to study temporary traffic control in work zones.

“It could be a major construction project that people have to drive through, or it could be something as simple as a mobile operation that’s rolling slowly down the side of the road that people may not expect to see and they may have to react differently,” he said. “While there are engineering principles in place and manuals that explain how you put the traffic control out, what we don’t always understand is how are drivers going to react. Do they react the way we think we’re going to react?”

“If we can imagine anything that could be a potential hazard on the road or on the roadside, we can model that and then drive subjects through,” Schrock said. “So if we’re interested in a work-zone setting, we can change the order that people receive information, or change where the merge point would happen if they have to change lanes, or how sharply they have to change lanes. We can throw them into an unexpected event, like a worker where they didn’t expect to see a worker, or a piece of equipment that rolls out into the road or is in the wrong place. How do people react to that? Do they do what we want them to do, or do they react in a way that we weren’t expecting.”

One example of student-led research with the new driving simulator is an effort by graduate student Vishal Kummetha, who is using the lab to look at drivers’ use of the adaptive cruise-control technology integrated into an ever-increasing number of modern vehicles.

“It involves finding out how driving awareness is affected by using adaptive cruise control while driving,” Kummetha said. “Adaptive cruise control allows a driver to select a maximum velocity and a headway gap between the two vehicles. The car will automatically accelerate or decelerate based on the settings that you’ve chosen. It’s useful in cases of fatigue and distraction in the vehicle, where the vehicle can take over and maybe give you some room to do other things in the car. But as this happens, there’s also the increased chance of increased distractions, and this can lead to losing control of the vehicle and this is what we’re trying to test.”

Undergraduate students are conducting research with the Driving Simulator Lab as well. For instance, student investigators from the Department of Mechanical Engineering are conducting a study on anti-lock braking systems, where lab allows testing of new pedal designs in the safety of a simulated environment. This effort is part of a senior capstone design project overseen by Christopher Depcik and Thomas DeAgostino.

“Anti-lock braking systems nowadays work by brake-by-wires,” Kondyli said. “That means drivers don’t get the pulsing feedback they would get in the older types of ABS. A group of three undergraduate students is trying to incorporate ABS with a pulsing mechanism into the driving simulator and make it a more realistic experience for somebody that’s that is using the simulator and braking very, very fast. The idea is to see what would be an ideal feel for the drivers while they’re braking. What will make them respond more quickly to a danger they see because of the braking feel?”

Indeed, future work at the Driving Simulator Lab could answer questions for an array of disciplines. Schrock described one potential line of inquiry involving medical researchers.

“We’ve been exploring opportunities in cross-cutting areas of medical issues and driving,” he said. “For example, if someone was to have a stroke and they’re recovering, at what point does someone in the medical field feel that they are able to drive? And how do medical practitioners come up with better decisions to know that, yes you can drive or no you can’t drive. Right now, they work on the basis of how people perform in the medical office. But how do people perform when they’re really behind the wheel? We can test that here and try to help them come up with better solutions.”