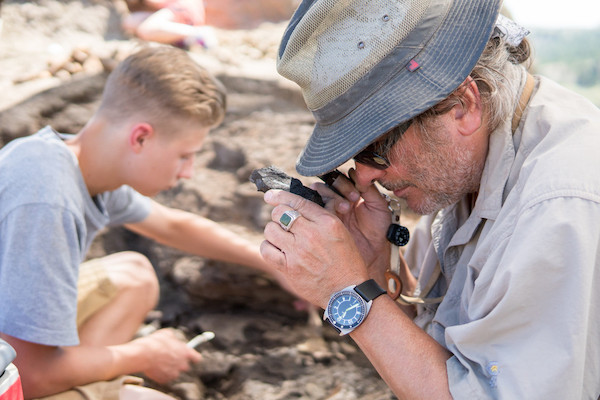 LAWRENCE — Most people think of picks, dental tools or small hand-held spades as the tools of the paleontologist’s trade. But today, when University of Kansas paleontologist David Burnham heads back to Montana for an expedition, he’s calling in much larger tools: a jackhammer, a demolition hammer and a backhoe.

These will help clear a new area of a cliffside near Jordan, Montana, where Burnham, students and volunteers are excavating a Tyrannosaurus rex bit by bit and bringing it back to KU.

Burnham and expedition team members have so far found about 25 percent of the skull, about 60 percent of the hips and 45 percent of the legs of a juvenile, female T. rex. There are teeth and many fragments, too. Much of what has been found so far is on display at the KU Natural History Museum.

The expeditions wouldn’t be possible without the help of dozens of donors, who have so far given more than $15,000 through a crowdfunding campaign on KU Endowment’s LaunchKU site. The campaign continues until June 5. Although it has already exceeded its goal of $14,500, the more funds that are raised, the more resources Burnham will have for the expedition and to hire students to prepare the fossils and to study and display them.

The campaign began with a major contribution from Boston residents John Weltman and Cliff Atkins, whose son, Kyle Atkins-Weltman, is a KU student and paleontology enthusiast.

When he first arrives, Burnham will work on setting up the field site, which is on federal land. The crew will set up a new large shade tent; last year’s tent was destroyed by storms and wind. They will concentrate on a small ledge of “bone zone” where a femur was found in the last few days of the 2016 expedition.

“We will be carefully looking for plants and rock samples since we will need these to document the site, which may be the first occurrence of T. rex in the Hell Creek Formation,” Burnham said.

The backhoe operator will then remove more of the cliff, or overburden, to make it easier to access fossils.

“The weeks that follow bring us into the unknown,” Burnham said. “We certainly expect to find more of the T. rex. Our hope is to get upper skull bones, more backbones, and the icing on the cake would be finding those tiny T. rex arms.”

“I really enjoy the revolving cast of characters that we interact with and there is a special camaraderie that develops while we are out there,” he said. “Everyone is so focused on the mission and it thrills me to have such enthusiasm. Each new crew member or volunteer breathes fresh life into the work as we go along.”