A discovery of multiple toothpick grooves on teeth and signs of other manipulations by a Neanderthal of 130,000 years ago are evidence of a kind of prehistoric dentistry, according to a new study led by a University of Kansas researcher. 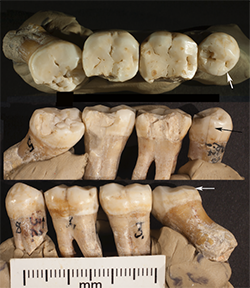 "As a package, this fits together as a dental problem that the Neanderthal was having and was trying to presumably treat itself, with the toothpick grooves, the breaks and also with the scratches on the premolar," said David Frayer, professor emeritus of anthropology. "It was an interesting connection or collection of phenomena that fit together in a way that we would expect a modern human to do. Everybody has had dental pain, and they know what it's like to have a problem with an impacted tooth."

The Bulletin of the International Association for Paleodontology recently published the study. The researchers analyzed four isolated but associated mandibular teeth on the left side of the Neanderthal's mouth. Frayer's co-authors are Joseph Gatti, a Lawrence dentist; Janet Monge, of the University of Pennsylvania, and Davorka Radovčić, curator at the Croatian Natural History Museum.

The teeth were found at Krapina site in Croatia, and Frayer and Radovčić have made several discoveries about Neanderthal life there, including a widely recognized 2015 study published in PLOS ONE about a set of eagle talons that included cut marks and were fashioned into a piece of jewelry.

The teeth and all the Krapina Neanderthal fossils were discovered more than 100 years ago from the site, which was originally excavated between 1899-1905. However, Frayer and Radovčić in recent years have re-examined many items collected from the site.

In this case, they analyzed the teeth with a light microscope to document occlusal wear, toothpick groove formation, dentin scratches and antemortem, lingual enamel fractures. 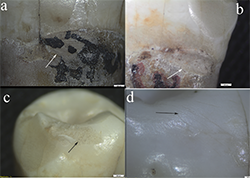 Even though the teeth were isolated, previous researchers were able to reconstruct their order and location in the male or female Neanderthal's mouth. Frayer said researchers have not recovered the mandible to look for evidence of periodontal disease, but the scratches and grooves on the teeth indicate they were likely causing irritation and discomfort for some time for this individual.

They found the premolar and M3 molar were pushed out of their normal positions. Associated with that, they found six toothpick grooves among those two teeth and the two molars farther behind them.

"The scratches indicate this individual was pushing something into his or her mouth to get at that twisted premolar," Frayer said.

The features of the premolar and third molar are associated with several kinds of dental manipulations, he said. Mostly because the chips of the teeth were on the tongue side of the teeth and at different angles, the researchers ruled out that something happened to the teeth after the Neanderthal died.

Past research in the fossil record has identified toothpick grooves going back almost 2 million years, Frayer said. They did not identify what the Neanderthal would have used to produce the toothpick grooves, but it possibly could have been a bone or stem of grass.

"It's maybe not surprising that a Neanderthal did this, but as far as I know, there's no specimen that combines all of this together into a pattern that would indicate he or she was trying to presumably self-treat this eruption problem," he said.

The evidence from the toothpick marks and dental manipulations is also interesting in light of the discovery of the Krapina Neanderthals' ability to fashion eagle talons into jewelry because people often think of Neanderthals as having "subhuman" abilities.

"It fits into a pattern of a Neanderthal being able to modify its personal environment by using tools," Frayer said, "because the toothpick grooves, whether they are made by bones or grass stems or who knows what, the scratches and chips in the teeth, they show us that Neanderthals were doing something inside their mouths to treat the dental irritation. Or at least this one was."

Top right photo: Three views of the four teeth recovered from the Neanderthal Krapina site in Croatia, roughly 130,000 years old. A team of researchers led by David Frayer, KU professor emeritus of anthropology, examined the teeth and found evidence of scratches and toothpick grooves on the three molars and one premolar tooth from the bottom left side of the Neanderthal’s mouth. Because two of the teeth are pushed out of their normal positions, the researchers found the grooves indicate an effort by the Neanderthal to manipulate his or her teeth to relieve the pain.

Bottom right photo: Researchers led by David Frayer, KU professor emeritus of anthropology, discovered toothpick grooves and other irregular facets and marks on this premolar tooth that belonged to a Neanderthal at the Krapina site in Croatia. The grooves and marks on the teeth indicate the Neanderthal attempted to remove the tooth with some type of tool, likely to address the pain it caused, Frayer said.