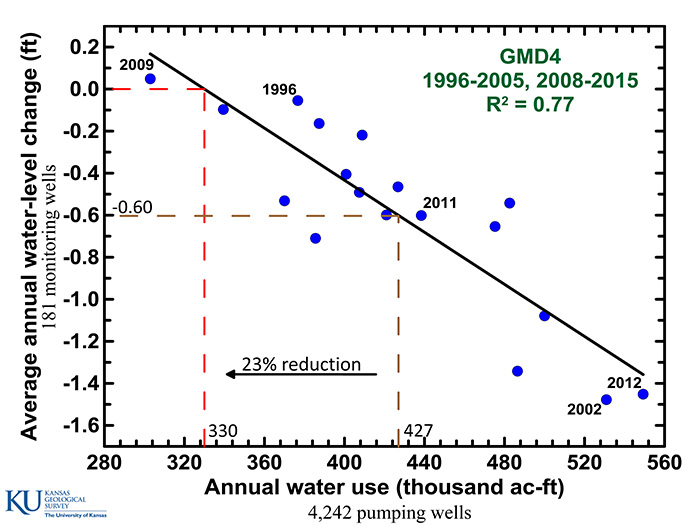 LAWRENCE — For at least the next one to two decades, irrigators in western Kansas may not have to cut groundwater use nearly as drastically as once thought to stem declines in the High Plains aquifer, according to water experts at the Kansas Geological Survey based at the University of Kansas.

Most water in western Kansas is drawn from the expansive High Plains aquifer, an underground network of water-bearing sediments whose main component is the Ogallala aquifer. Underlying portions of eight states, the High Plains aquifer is the primary source of irrigation, municipal, industrial and domestic water for western and central Kansas.

As groundwater pumping from the aquifer increased significantly over the last 70 years, groundwater levels have fallen precipitously in some parts of the aquifer compared with pre-pumping levels. Such declines will continue unless pumping is reduced.

The critical question is how much should pumping be reduced to make a significant impact on the decline rate. To help irrigators with that question, KGS scientists developed a method to determine how much of a reduction in water use would be needed to achieve a specific decline rate or even stabilize water levels in the aquifer.

“We came up with a new approach for estimating the impact pumping reductions have on the rate of water-level declines,” said Jim Butler, KGS senior scientist and geohydrology section chief. “It’s tailor-made for the High Plains aquifer in Kansas, where groundwater is pumped mainly during the growing season, and exploits the great groundwater data we have in the state.”

Scientists originally predicted groundwater use might have to be reduced 75 percent or more to maintain the aquifer in western Kansas at or near current water levels. Based on their new analyses, Butler and his colleagues assert that can be achieved with just 25 percent to 45 percent reductions in most areas. Promising results for irrigators who reduced pumping at those lower levels have already been seen in one area of northwestern Kansas.

In mid-July, Kansas Gov. Sam Brownback asked Butler to accompany him to present the KGS findings to a group in Hoxie in Sheridan County, where local irrigators had initiated a Local Enhanced Management Area, or LEMA, to reduce usage on a voluntary basis. Water users within the LEMA’s boundaries created a plan to reduce pumping in a way that would not hinder crop production.

Actions that can be taken to achieve reductions include shutting off irrigation pivots when it rains, growing more drought-resistant crops and growing a greater variety of crops. Technologies such as soil-moisture probes that indicate when irrigation is or isn’t needed and high-efficiency irrigation systems that lose less water to evaporation have made reduction efforts easier.

Although members of the Sheridan County, or SD-6, LEMA were aiming to reduce pumping by 20 percent, in actuality they achieved a 35 percent reduction over four years.

“The result is that the decline rate there has gone from about 2 feet per year to about 5 inches per year without affecting the bottom line of producers in the area,” Butler said. “That’s a big deal.”

However, water levels, which have dropped as much as 80 feet in southwest Kansas since just 1996, will never be restored to pre-pumping levels.

“Realistically, we are talking about reducing the rate of decline or stabilizing water levels,” Butler said. “Replenishment of the aquifer is really not in the cards.”

Even if pumping were stopped completely, it would take hundreds of years to recharge the aquifer.

“The hope is that the success of the SD-6 LEMA will inspire others to follow suit,” Butler said.

The SD-6 LEMA is the only one implemented in the state so far, although LEMAs are under consideration elsewhere. On the trip to western Kansas with the governor, Butler also presented the KGS findings to an interested group of irrigators north of Garden City. KGS analysis shows that a 28 percent reduction in pumping in their area would stabilize water levels.

Besides encompassing the Ogallala aquifer, the High Plains aquifer includes the smaller Equus Beds aquifer around Wichita and Hutchinson and Great Bend Prairie aquifer in the vicinity of Great Bend, Kinsley, Greensburg and Pratt. Because the central part of the state generally receives more annual precipitation than far-western Kansas, stable water levels appear to be attainable in the Equus Beds and Great Bend Prairie with pumping reductions of less than 10 percent.

The KGS researchers’ new approach to estimating pumping reductions was inspired by groundwater flow patterns observed in the real-time data from several wells they monitor continuously. Results found with the approach are based on pumping data recorded by flow meters that the state of Kansas requires on all nondomestic wells as well as water-level data collected annually by the KGS and the Kansas Department of Agriculture’s Division of Water Resources (DWR) from more than 1,400 wells in western and central Kansas.

Graphic via the Kansas Geological Survey.