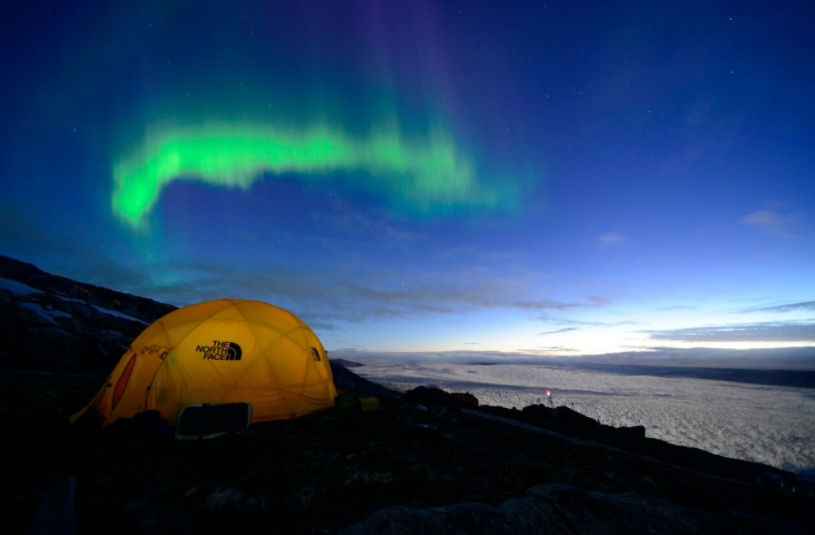 LAWRENCE — Most researchers dedicate grant funds to things like lab equipment, travel expenses or salaries for graduate assistants. But not too long ago University of Kansas geologist Leigh Stearns found herself at a Cabela’s, grant in hand, asking the gun-counter staff which rifle might be most suitable for defending herself from a polar bear. 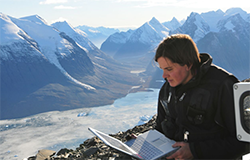 “I got a Marlin Model 1895 Big Bore Lever-Action Rifle,” she said. “I took private lessons. Then I went to KU Public Safety office, and they actually took me to the KU police range and helped show me how to shoot.”

Polar bears pay heed: The associate professor of geology will tote her trusty firearm along next summer for a return trip to eastern Greenland.

After a couple of commercial airline flights to Tasiilaq, Greenland, and a 40-minute helicopter ride to a remote fjord, Stearns plans to install a second Autonomous Terrestrial Laser Scanning system — dubbed ATLAS — to monitor rates of ice loss on the vital Helheim Glacier, a tidewater glacier undergoing large-scale changes due to global climate change. 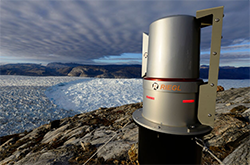 “It’s one of the glaciers in Greenland that has been studied the most because it’s been changing a lot in the past 15 years,” Stearns said. “You can think of Greenland as a big reservoir of ice that has around 200 glaciers draining it. However, there are only a handful of glaciers responsible for most of its mass loss. Helheim is one of them — its annual mass loss doubled since 2001, but not in a linear or easily understandable way. Because Helheim Glacier discharges a lot of ice each year, we are very interested in understanding what controls its behavior.”

While one ATLAS system has been in place already since 2015, a continuing $569,000, three-year grant from the Heising-Simons Foundation will enable Stearns, along with a KU graduate student and researchers from the U.S. Army Corps of Engineers Cold Regions Research and Engineering Laboratory (CRREL), to install a second system. Stearns expects the new ATLAS station to deliver even more comprehensive data on ice dynamics and the glacier’s response to atmospheric and ocean variability.

“LiDAR is an emerging technology for the earth sciences because it produces an incredibly detailed 3-D view of features,” said the KU researcher. “Repeat LiDAR scanning reveals small-scale changes with very high precision. These systems are now used to measure how bridges are sagging, how tectonic faults propagate and now how glaciers flow. The ATLAS systems are unique because they’re designed to scan the glacier terminus every six hours, year-round. That’s not a trivial task when there’s no sunlight in the winter, winds are high and it’s very cold.”

With each scan, the ATLAS systems collect millions of ‘point-cloud’ (x-y-z) data of the glacier terminus. The dataset is unique because it’s three-dimensional, so Stearns can measure how the glacier is moving horizontally and vertically at the same time.

“This dataset gives us the unique opportunity to investigate how glacier flow changes with tidal cycles, or different buoyancy conditions, or iceberg calving events,” she said.

With a team including co-investigator David Finnegan of the U.S. Army Corps of Engineers, Stearns will affix a second ATLAS system on the opposite side of Helheim Glacier from the first system. Each ATLAS is composed of a LiDAR (Light Detection and Ranging) laser scanner, camera, two solar towers, a wind turbine, fuel cells and a control and communications module.

“This project actually started in 2010 with a pilot study that was funded by KU’s New Faculty General Research Fund,” Stearns said. “With CRREL and University of Maine colleagues, we tested a standard LiDAR system that operated at a 1,550-micrometer wavelength. This wavelength is significantly nonreflective on snow and ice and greatly reduced the range — to less than 200 meters — over which we collected data. Over the past several years, we’ve been working with the Riegl company to build a LiDAR that operates at a 1,064-micrometer wavelength and can collect data to greater than 4,000 meters.”

“Greenland’s contribution to sea-level rise doubled in the past two decades, and Helheim Glacier is a big piece of that,” she said. “This project will help us understand glacier variability better so that we can improve estimates for how glaciers will behave in a warming climate. Right now the largest uncertainties in sea level rise projections come from the behavior of glaciers in Greenland and Antarctica.”

According to Stearns, developing a better idea of what, in particular, these glaciers are sensitive to will help us improve these models which, in turn, will help communities prepare their infrastructure for realistic magnitudes of sea level rise.

“There hasn’t been a linear relationship between Greenland ice mass loss and temperatures in the Arctic — so we can’t say if it’s going to warm 1 degree in 30 years, that means this glacier is going to do this,” she said.

The KU geologist stated each glacier is unique and each tends to respond differently to variations in temperature and precipitation. So, millions of data points collected on Helheim Glacier won’t necessarily foretell the precise behavior of similar ocean-terminating glaciers in Greenland.

“While the processes that we study on Helheim Glacier should be applicable to other hundreds of glaciers, it doesn’t mean that other glaciers will respond the same way that Helheim does,” Stearns said. “The ocean currents near Helheim are relatively warm, but they don’t extend much farther north. So, if the ocean is driving most of the negative mass loss it suggests that only glaciers in south Greenland will accelerate and retreat. But if the atmosphere is driving most of the changes, then glaciers all around Greenland might accelerate. So even something as simple as if it’s the oceans or the atmosphere driving ice flux — we haven’t yet figured that out.”

To better understand what’s triggering changes at the Helheim Glacier, Stearns and her co-investigators will need to crunch an enormous amount of data collected and transmitted by the two ATLAS laser-scanning systems. In part, the data analysis will fall to a KU master's student, paid under the continuing Heising-Simons award, who will work with U.S. Army Corps of Engineers personnel.

“My colleagues at the Army Corps of Engineers are prepared to do most of the initial data processing and storing,” Stearns said. “The KU graduate student will have the fun job of analyzing the data and figuring out what it means. The student also will travel to Greenland every year. I have money for a student to come with me. It’s a very important part of their education to get them into the field.”

Stearns said her mission to better grasp changes occurring on Helheim Glacier wouldn’t be possible without the support of the Heising-Simons Foundation.

“I feel so lucky to have this foundation support our work,” she said. “Federal funding for polar research is decreasing, so It’s really nice to know this kind of foundation is interested in filling that gap.”

The Northern Lights over Helheim Glacier, East Greenland. The bright light of the ATLAS system is visible in middle of the photo. Credit: Adam LeWinter, U.S. Army Corps of Engineers Cold Regions Research and Engineering Laboratory.

A Riegl VZ-6000 laser scanner, operating at 1064 um wavelength, serves as the backbone of the ATLAS system.

Components of the ATLAS system on the south side of Helheim Glacier. Credit: Adam LeWinter, CRREL.