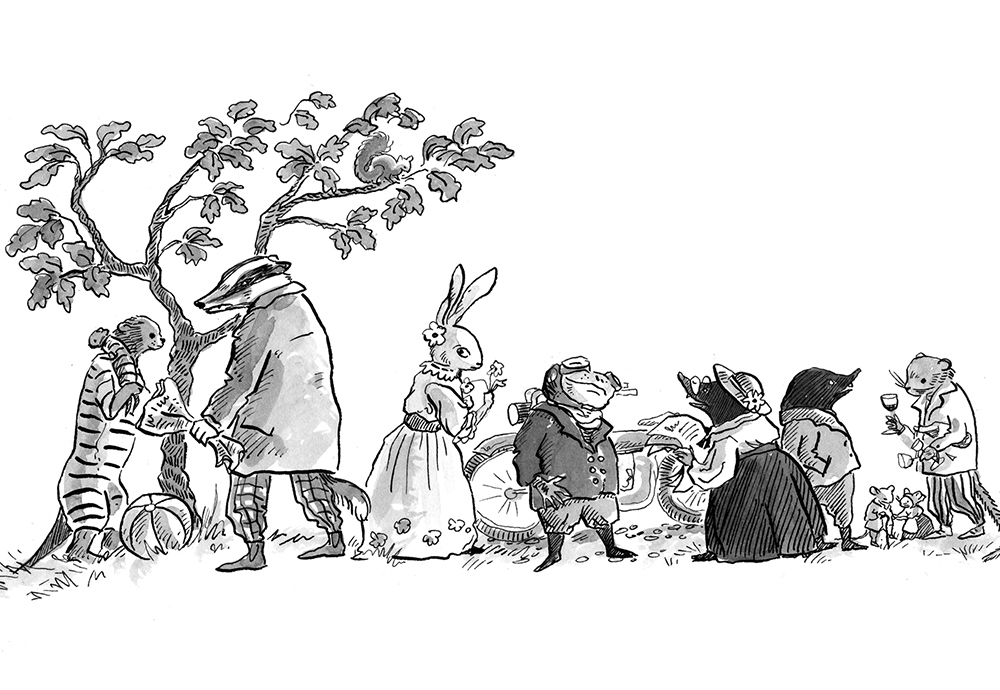 LAWRENCE — Writer Kij Johnson is making a career — or at least an epoch — out of updating classic novels with a feminist twist. Her latest, “The River Bank,” (Small Beer Press) is a sequel to Kenneth Grahame’s 1908 “The Wind in the Willows” with two female protagonists. It follows her 2016 novel, “The Dream-Quest of Vellitt Boe,” which reimagined H.P. Lovecraft’s 1943 novella “The Dream Quest of Unknown Kadath” with a heroine rather than a hero.

In “The River Bank,” Johnson, assistant professor of English at the University of Kansas, emulates Grahame’s style and cadence while adding female characters Miss Rabbit and Miss Mole to the well-loved original cast of Toad, Rat, Badger and (Mr.) Mole.

Johnson said she internalized “The Wind in the Willows” as a child, reading it over and over until she had “worn the tread off” it and then set it aside for a time. She returned to it a few years ago while preparing to teach a class about anthropomorphic animals in literature.

“When I re-read ‘Wind in the Willows,’ I noticed a lot of things I hadn’t noticed before,” she said. “I noticed the beauty of the craftsmanship, the sentence-level writing. I noticed he did this really interesting thing where he would just abruptly change modes from one chapter to the next. So there would be one chapter that was a comic romp, and then there would be a beautiful, lyrical chapter … The Piper at the Gates of Dawn is a chapter like that — very beautiful and lyrical and strange and doesn’t really suit a children’s adventure about a Toad stealing motor cars, and yet it fits perfectly.

“The other thing I noticed is that there weren’t any females at all. … I noticed that there are just enough references to female animals that you realize they’re there; it’s just that none of the point-of-view characters notice them. … And yet, Toad Hall has maids. It must. It’s a giant estate. There must be female Water Rats for there to be male Water Rats.

“There is so much stuff like that that didn’t bother me as a child, but as an adult it did, kind of. So I wrote females in, just to see what would happen. And it really wrote itself. … What I remember is that every day that I sat down, I thought ‘This is going to be fun.’ And I never say that about writing. Writing is hard work.”

Johnson said she decided to maintain such characteristics of Grahame’s novel as the “weird hierarchy” of anthropomorphic animals, from Toad and his pals “who wear clothes and have adventures and drive motor cars” to the horse who pulls Toad’s caravan wagon but who doesn’t wear clothes, “and yet once in a while, we’re inside the horse’s mind, and the horse thinks this whole thing is kind of a crock. The horse says, ‘Wait a minute; why am I the one to be pulling it?’

“There were tiers of animal-ness in the story, and humans engaged with the animals who wear clothes and own property pretty much the same as they might engage with people, except with a slightly superior attitude.

“I noticed that the adventures often have to do with technology. Toad loves his technology, and yet he’s terrible with it. … so he has this cycle that has to do with transportation and machines.

“These were all things I decided I wanted to do in my story. But I wanted to escalate the situation somewhat. So where do you go from motor cars? Well, you could go to airplanes, and there’s a wonderful writer, William Horwood, who has written a sequel to ‘Wind in the Willows’ where Toad essentially becomes a pilot. So I thought, ‘Well, that’s not going to happen.’ But there were many other possibilities for escalation, and I’ve loved motorcycles for many years, and I decided to throw him on a motorcycle. What could go wrong with that? Everything!”

As for the female characters, Johnson said she added them “because, as an adult, I like there to be somebody that I can insert myself into or see myself in.”

“I had a young mole lady and her rabbit companion, because you couldn’t live alone if you were gentry-ish, so of course she has to have a companion and of course she would bring a rabbit, and everybody knows that rabbits are flighty. They talk about it in the first book. And we all think that, too. You know, mad as a March hare. So I give her a rabbit companion who has rather poor judgment and gets into adventures all the time. And then I just saw it happen.

“It is pretty funny, I will say. I’m so happy I wrote it. It’s a book I wish had existed when I was a little girl. But it’s not really written for children. It’s got tons of inside jokes for adults. And for people who are deeply immersed in what you might consider the canon of light adventure novels from 1890 to 1915, it’s got all kinds of hat tips to different novels that people might get. I don’t expect people to notice them, but it was fun for me.”

Johnson said both “The River Bank” and “Vellitt Boe” “come from the same impulse … me looking at canonical works like that and saying, ‘What would have happened if you had inserted women? What if Lovecraft had put women in? What might it have looked like?’ And of course what I produced is very different than what Lovecraft would have produced, similarly with this. Although this is probably closer to something Grahame would have done because the female characters don’t infringe at all on any assumptions that he is bringing in. They are mostly just absent.”

Johnson said she has conceived a theory about such works while writing them – “that a creative intervention or interaction with a classic work is a valid way to engage critically with it.

“For instance, the boldness of the move from these lyrical chapters to the adventure chapters. Do you lose readers when you move from one mode to another? Do you gain readers? Do readers come to the next chapter in a more sophisticated way because of this intermediary chapter?

“I think the creative response is a valid critical response, and we see it all the time. We see it in ‘The Time Traveler’s Wife.’ We see it in ‘Frankenstein’s Bride.’ All of these stories are people engaging with a classical work creatively and learning about the classical work in the act of creating that nobody else would get.

“Somebody who is engaging critically is going to have a different experience, but they will never have the experience of writing a scene in that situation, in that world, with those characters, word by word and making word-by-word dialogue choices about what Frankenstein would say, for instance. So we have a radically different approach, but I think it’s an interesting approach, and I think it’s been going on casually in the field of modern letters for quite some time. I don’t know that it will ever be taken seriously at the academic level, but I think it’s valid and very vibrant.”