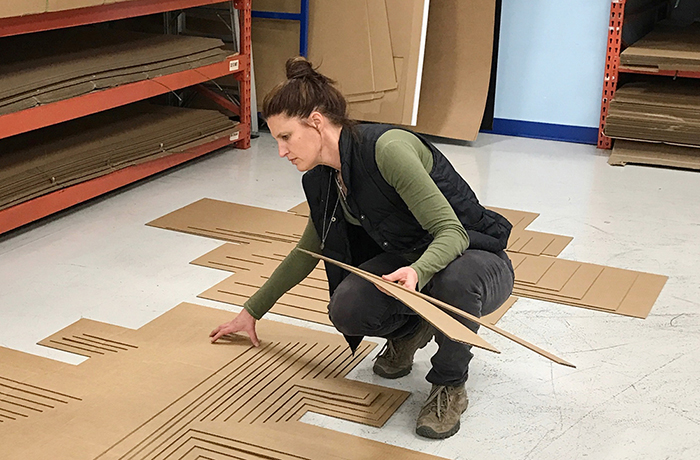 LAWRENCE — Although she’s an academic and an artist, May Tveit does not look down on factory work. On the contrary, she idealizes it, celebrates it, utilizes it, loves it.

That’s clear after a look at her latest exhibition, “Universal Boxes,” opening today, Oct. 19, and running through Jan. 28 at the Nerman Museum of Contemporary Art at Johnson County Community College, Overland Park.

The show in the Kansas Focus Gallery consists of eight cardboard sculptures created at and inspired by Tveit’s experience over the past two years as an embedded artist at the Lawrence Paper Co.

“I have a fascination with industrial parks,” Tveit said. “They are these metal boxes on the outskirts of town — anonymous, generic. And yet inside is a fascinating world of people and making.”

Now an associate professor of design, Tveit said she obtained the cooperation of the local factory soon after she arrived at KU in 1999. The Lawrence Paper Co. makes corrugated cardboard, boxes and packaging products. Her students first toured the factory, and for the past several years they have engaged in industry-sponsored collaborative projects. After a recent meeting to discuss that ongoing partnership, Tveit said, she told company officials about her idea to create her own artwork at the factory.

“I said I would really like, initially, to just come in and be an observer. I’d like to be able to walk around and take photographs and video and to think and sketch and take notes. For almost two years I would periodically go to the factory to wander around. I have a little nomadic desk in the design department, in the prototyping area. There’s not a moment I don’t walk in there and see something beautiful about the people, the materials and the industrial landscape.”

Tveit was afforded the use of the prototype-cutting table and the corrugated material to make the artworks in “Universal Boxes.” She stacked layers of precisely cut cardboard and glued them together – using factory glue – by hand.

In his essay for the show, KU Professor of Art History David Cateforis states that Tveit carries on a heritage of cardboard art that begins with Picasso’s 1912 cubist guitar and extends through Robert Rauschenberg’s 1970s wall sculptures made from found boxes. Given their unadorned, monochrome nature, Cateforis also sees an affinity with the minimalism of the 1960s, with aspects “suggestive of ancient Mesopotamian ziggurats or the step pyramids of pre-Columbian Mesoamerica.” For Tveit, it's about making “monuments to manufacturing” and “the poetics of the ubiquitous corrugated cardboard box.”

“Along with the formal properties of the works I’m also interested in considering the physical, emotional and psychological qualities of the box and how humans tend to compartmentalize. I’m curious about the function of a box in terms of holding, hiding, protecting, and transporting the useful and useless contents of our lives.”

Photo: May Tveit working on a piece for the “Universal Boxes” show. Credit: Haley Fetters Crouch.