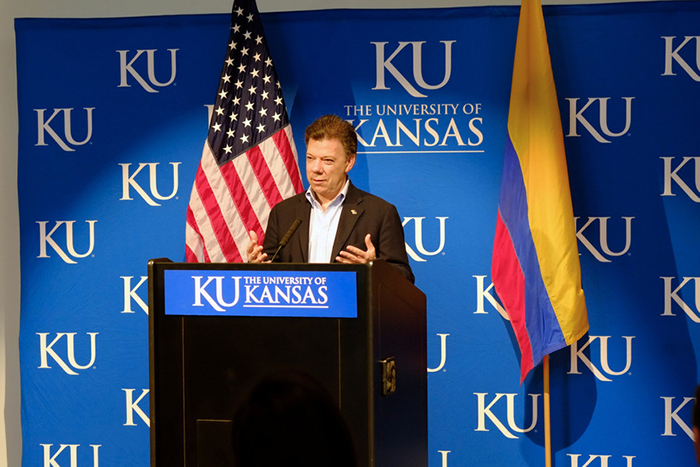 EDITOR'S NOTE: Due to a change in President Santos' schedule, this event has been moved to a new date and time. The event will now take place at 5:15 p.m. Tuesday, Oct. 31, at the Lied Center.

LAWRENCE — President Juan Manuel Santos of Colombia will visit the University of Kansas to receive an honorary degree and to deliver remarks at a Lied Center event on Oct. 31.

Santos received economics and business degrees from KU in 1973 and won the 2016 Nobel Peace Prize for his work to end a decades-long civil war in Colombia. He last visited KU in 2012.

Santos will speak at a public event at 5:15 p.m. at the Lied Center. Doors will open at 4:30 p.m., and tickets are not required. Chancellor Douglas A. Girod and former KU Chancellor Bernadette Gray-Little will participate in a hooding ceremony for Santos’ honorary degree during the event.

“President Santos is an inspirational leader who led difficult efforts to end the more than 50-year-long civil war in Colombia,” Girod said. “I look forward to welcoming him back to his alma mater as a Nobel laureate and to presenting him with an honorary degree recognizing his commitment to peace for his country.”

Santos was born in Bogota, Colombia, and arrived at KU in 1969. After graduating, he studied at the London School of Economics and Harvard University. He has served as minister of foreign trade, minister of finance and public credit and minister of national defense before becoming president of Colombia. He earned the Nobel Peace Prize for his role in peace negotiations between the government and guerrillas who had been fighting a civil war lasting more than 50 years.

Santos will be awarded the degree of Doctor of Humane Letters for outstanding contributions to achieving peace in his country and the world.

KU awards honorary degrees based on nominees’ outstanding scholarship, research, creative activity, service to humanity or other achievements consistent with the academic endeavors of the university. Recipients do not need to be KU alumni, and philanthropic contributions to the university are not considered during the process.

Media interested in covering Santos’ Oct. 31 speech are asked to RSVP with Erinn Barcomb-Peterson at ebp@ku.edu by 5 p.m. Monday, Oct. 30.

Photo: President Juan Manuel Santos of Colombia visits the University of Kansas in this 2012 file photo from KU Marketing Communications.