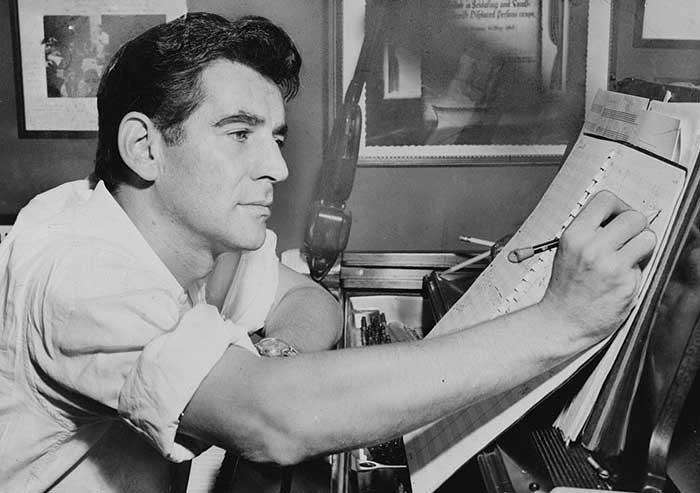 LAWRENCE — It doesn’t take much to get University of Kansas Professor of Musicology Paul Laird going on the subject of Leonard Bernstein, about whom his new biography is scheduled to be published next month in this, the centennial year of Bernstein’s birth.

Laird will be one of the featured speakers at this weekend’s symposium sponsored by the School of Music, “A KU Lenny-Centennial: The Musical Theater of Leonard Bernstein (1918-1990).”

“He is one of the most important musicians in the history of the United States,” Laird said. “He composed not only symphonies and ballets, he wrote for the musical theatre. That’s a very unusual double — to be writing concert music that is respected and some of the best musical theater of his generation.

“He was, of course, the first American-born, American-trained conductor of international importance. His recording catalog is still commercially viable.”

Beyond the intrinsic value of his compositions, Laird says, Bernstein’s role as a popularizer of classical music is still held in awe by those in his field.

“At a time where, in the classical music world, we want to stay current — and in popular culture that’s not an easy thing to do these days — Leonard Bernstein would go on national television — regular networks; not PBS or Arts & Entertainment but ABC, CBS and the like — and do children’s concerts and concerts for adults with lots of commentary that he presented that people cared about,” Laird said. “He had a gift for explaining music to people who don’t know anything about music. He could explain musical concepts and have them feel like they learned something.

“There has been no one else like him in the history of American music education who has done that on such a popular level. So there is all kinds of stuff we can still learn from this man. At this point, it may be as much in terms of approach as the actual knowledge. But he gave us something that no one else has been able to do, in terms of popularizing classical music in a really intelligent and musical way.”

A biographer must also deal with Bernstein’s personal life, which pretty much coincided with the so-called American Century and reached its apogee during the Swinging '60s. Bernstein was, if not tabloid fodder, then certainly an estimable figure in middle- to highbrow popular culture.

“At a time when we’re also trying to come to grips with the other in our society, Bernstein was a gay man living in a world that didn’t necessarily respect that,” Laird said. “The way that kind of thing went on is very interesting and very telling.”

Laird says the British publisher Reaktion Press invited him to write about Bernstein for its Critical Lives series. At about 200 pages, the book, simply titled “Leonard Bernstein,” is designed for undergraduates or members of the general public who want, as Laird puts it, “an evening-length” biography of the great man. It’s being distributed in the United States by the University of Chicago Press.

When Laird was a young man, he interviewed Bernstein for an hour and says the encounter has proven instructive in his now 30-plus-year scholarly career.

He has written two previous books on Bernstein: “Leonard Bernstein: A Guide to Research” (Routledge, 2002; 2nd ed. 2015 with co-author Hsun Lin, a former doctoral student) and “Leonard Bernstein’s Chichester Psalms” (College Music Society and Pendragon Press, 2010.) The latter book serves as the example of choral music in the series from the publishers that explains various musical genres.

Laird says he tried to synthesize the existing scholarship on Bernstein and his own knowledge of man and his music to create a compelling biography.

“Since I’m a musicologist, I talk about every one of his major compositions; what’s going on in them musically and their premiere and their success or lack thereof,” he says. “I dealt pretty heavily with his life. It was a complicated life, to say the least. I did what you can do in 50,000 words.”

KU in the news
NPR — Sun, 12/05/2021
Bob Dole, a Republican politician shaped by his Kansas roots
The New York Times — Sun, 12/05/2021
Bob Dole, old soldier and stalwart of the Senate, dies at 98
In advance of Biden's visit to Kansas City today, @jonshorman spoke with @KUSPAA professor of practice… https://t.co/Pf6f3Ba6ie
«»
Follow us on Twitter »
Why KU
Apply »
One of 34 U.S. public institutions in the prestigious Association of American Universities
44 nationally ranked graduate programs.
—U.S. News & World Report
Top 50 nationwide for size of library collection.
—ALA
5th nationwide for service to veterans —"Best for Vets: Colleges," Military Times