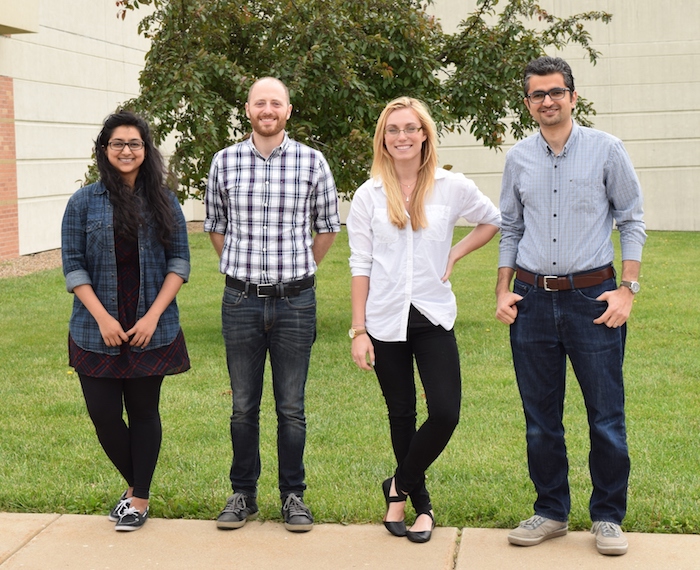 LAWRENCE — A paper just published in Nature Biotechnology outlines a pioneering method of screening a person’s diverse set of antibodies for rapid therapeutic discovery. Antibody proteins are an important part of the human immune system that specifically target foreign viruses and bacteria, and they have been the fastest-growing class of approved drugs in the past several decades. 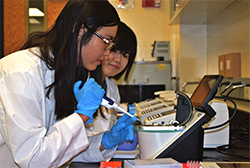 The new techniques made it easier to discover new antibody drug molecules while also learning more about immune responses to vaccines and infections. These advances could lead to better preventions and treatments of diseases like Ebola, HIV, flu and Epstein-Barr virus.

“These technologies are providing a new window on human immune protection that we have never been able to see before,” said co-lead author Brandon DeKosky, assistant professor of chemical & petroleum engineering and pharmaceutical chemistry at the University of Kansas. “They will dramatically accelerate antibody drug development and may also lead to more effective vaccines.” 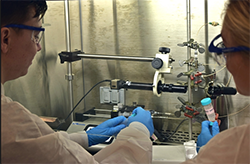 DeKosky said key innovations set the stage for this new research, including the development of protein display systems in the 1990s, improvements to antibody discovery beginning in the 2000s and the development of technologies to identify natively paired antibody sequences in the 2010s. The new paper combines advances in these three technical areas in an entirely new way to achieve large-scale antibody analysis and screening, resulting in several new and highly potent antibodies in the process.

With co-authors including Bo Wang, Andy Ellington and George Georgiou at the University of Texas-Austin and Morgan Timm, Nancy Sullivan and John Mascola at the National Institutes of Health, DeKosky has developed a technology to screen millions of human B cells to rapidly identify the antiviral antibodies that they contain.

“Antibody molecules are encoded by B cells and are assembled from two different genes, called the heavy and light chains,” the KU researcher said. “The VH and VL portions — derived from the heavy and light chains, respectively — are the sections of an antibody gene that provide specific viral targeting. So, the VH and VL portions are the most important region to focus on for antibody screening and discovery.”

Previous efforts in antibody discovery often relied on single-cell cloning, which led to dozens of experimental or approved drug therapies. However, single-cell cloning holds several major drawbacks because of its very high costs and is limited to sampling a tiny fraction of the human antibody inventory.

“Because antibodies are derived from two different genes — both of which are highly variable and contained within a single B cell — we need to perform single-cell manipulations en masse to recover the set of complete antibody genes,” DeKosky said. “Traditional single-cell cloning is very expensive and time-consuming. The methods described here overcome those limitations and make it possible to screen millions of antibody-producing cells in a single experiment at an academic lab.”

Limitations of previous approaches were a major motivating factor leading to the development of the new technology for screening native antibody libraries.

“Non-natural gene pairing has been used in the past because it’s so much easier to do, but often the quality of antibodies discovered is not good enough for an effective drug, and the synthetic nature of those antibodies makes it difficult to understand the true human immune response,” DeKosky said. “By maintaining native antibody gene pairings throughout our process, we identified antibodies as they occurred naturally. Along the way, we found extremely potent antibodies and learned more about the human immune response to vaccination and natural infection.”

Researchers next will apply this new platform technology to find additional promising antibodies that could serve as the basis for drug therapies.

“Our major motivation was to be able to understand human antibody responses in great detail, which is critical for new therapeutic drug discovery and for vaccine design,” DeKosky said. “Promising sources to discover new antibodies include donated blood samples from HIV patients with powerful immune responses against the virus, and also individuals who have received vaccines so that we can understand how those vaccines are working. When a potently neutralizing antibody is discovered, it can lead to new vaccine strategies and new therapeutic drug candidates.”

DeKosky said a large number of students and research trainees were involved in this project, including at UT-Austin, NIH and KU.

“This is a prime example of the synergy between academic research and scientific training, where trainees learn by contributing to a larger scientific project,” he said. “This project was several years in the making, and many undergraduates, grad students and postdocs involved have now transitioned to the next stage of their career. Each of us has brought those new skills and ideas along as we transition to different places.”

The KU researcher said these technologies are being applied for drug discovery against a broad range of disease targets in academia, government and the private sector.

“In my lab, we are continuing to develop and improve these systems, and also apply them to learn more about immune responses and discover new therapeutics,” DeKosky said. “We are extremely excited to apply the technology to a host of exciting research problems here at KU — so stay tuned!”