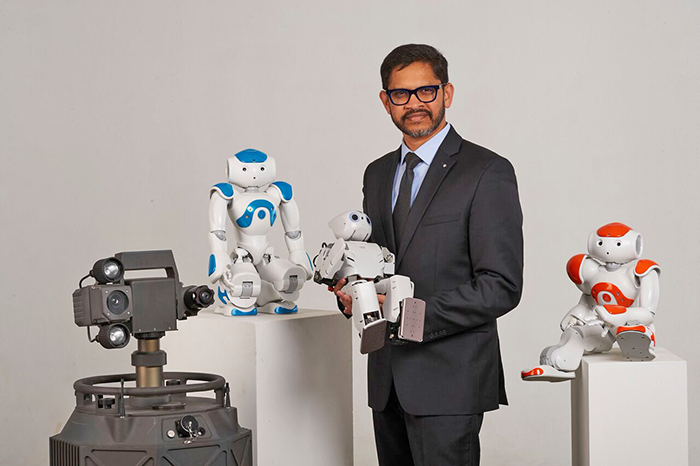 LAWRENCE — Sure, there have already been 3-D printed houses. And you can pick up a Nest Thermostat with artificial intelligence at your local hardware store. But a new book co-written and co-edited by Mahesh Daas, dean of the University of Kansas School of Architecture & Design, argues that robotics can and soon will be even further integrated into the design processes at the heart of architecture.

Daas and his collaborator on “Towards a Robotic Architecture” (2018, Applied Research & Design Publishing), Temple University Assistant Professor of Architecture Andrew John Wit, brought together a variety of notable authors to survey the latest developments in the field.

Daas said that, after an introductory framing of the question, the book explores such endeavors as robotic construction methods, robotics used for building operation, and maintenance and the use of robotics in design itself. Finally, it looks to the future, including a chapter on how robotic construction could make life on Mars possible.

Daas said robots have fascinated him since he first encountered a robotic toy as a child. He has been involved in the field professionally for 20 years, serving, for instance, as president of the Association for Computer Aided Design in Architecture from 2007-09. He serves on the editorial board of the International Journal of Architectural Computing.

Despite some scary sci-fi depictions, robotics is nothing to be afraid of, Daas said. On the contrary, he said, robots will be necessary to do many of the things we wish to do in the 21st century. Daas believes robotics will affect every sphere of life: environmental, conceptual and cultural.

“The world of tomorrow will not be possible without robotics,” Daas said. “They might be used as agricultural pollinators, as better ways to take care of wilderness, out in oceans. How do you track waste floating around the ocean? Going to Mars. We cannot get there without robots. Climate change can’t be combated without robots and artificial intelligence. We can’t solve the problems of today with the ideas of yesterday.”

Indeed, our world is already being affected by robotics, Daas said.

“Take the environment. Take self-driving cars,” he said. “There are already companies betting on it; cities are preparing for it. So the environment in which we live is already being transformed by robotic agencies of that kind. Why are drones so popular now? Because they are robotic. The technology of flight is not new. The helicopter is not new. But the ability to sense and respond in real time is new. That’s why drones have become so commonplace. They will transform … every topic: agriculture, biology, medicine and architecture.”

As noted earlier, robotic construction methods are already in use, and Daas said this will only accelerate, with robots making “everything from small things all the way to skyscrapers.

“They become part of building our world,” he said.

As for the cultural effect of robots, Daas said that, too, is already happening.

“With the invention of the clock, we framed the world, the universe, as a clock — a mechanism that keeps ticking,” Daas said. “Then when we began to use computers, we began to see the world as informational systems, including ourselves. So first we were machines, and then we were computers, and now we are robots. So in that sense it is a cultural phenomenon. We think the robot is the other, but little do we realize it is more about ourselves. Technically, as well as conceptually and experientially, the distinction between robots and humans is fuzzier than ever.”

OK, so we’re already building and maintaining things robotically, but what about designing them? Isn’t that the heart of architecture: something irreplaceably human?

“We talk about robots and artificial intelligence for design,” Daas said. “How we use robots in the design process, moving from the design process to prototype things. In that sense, robots become partners in exploring and designing. So it’s not that robots are going to take over, but the distinction between robots and us begins to get blurred. One becomes the extension of the other.”

Daas believes that robots won’t obviate humans in his field but will instead enhance human life.

“We are only afraid of what we don’t understand,” he said. “You have to demystify new technology. If you don’t, we’re driven by fear and baffled by that experience. It is a brave new world.”

Photo: Mahesh Daas has worked with the Darwin robot (in his hands), among  other androids borrowed from KU’s School of Engineering: