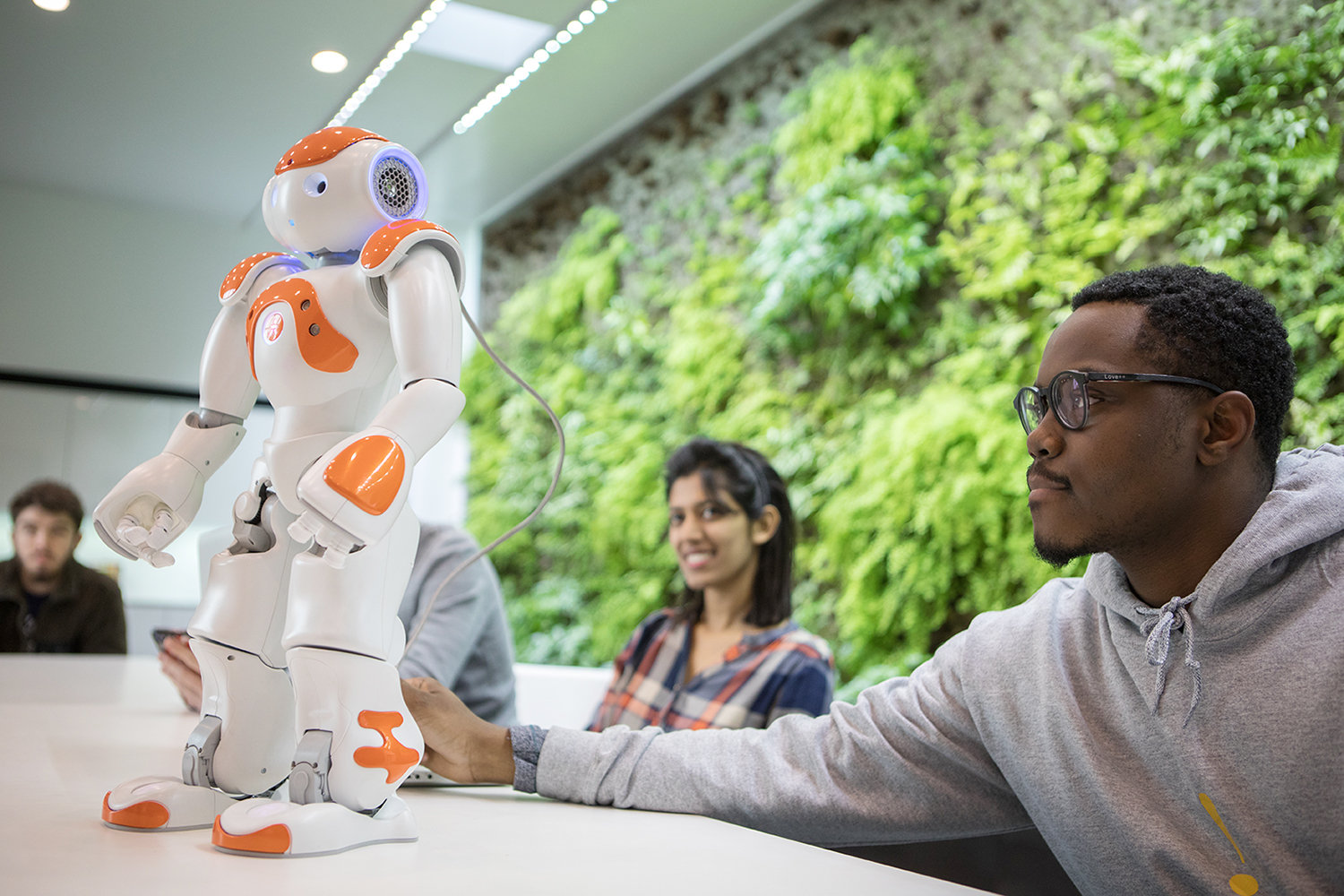 LAWRENCE — Can a robot have a better bedside manner than a doctor? Perhaps. But a humanoid robot packed with the latest technology can certainly spend more time with a child in the hospital, become his or her confidant and utilize technological abilities that exceed those of humans.

Those were the findings of a fall-semester class at the Center for Design Research (CDR) of the University of Kansas School of Architecture & Design. The class was the latest research project in a long-running collaboration between the CDR and Overland Park-based Sprint. SoftBank Robotics, an arm of Sprint’s Tokyo-based parent company, SoftBank Group Corp., loaned the robots to the CDR for the project. 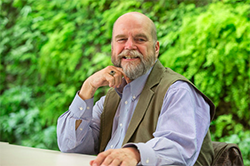 The idea, CDR Director and Design Professor Greg Thomas explained, was to explore the innate capabilities of the robot – e.g., facial and speech recognition, movement, data capture – in a pediatric health care setting. NAO and Pepper robots from SoftBank Robotics are used to assist people in retail, hospitality, banking and health care. For this particular project, Thomas wanted his students to see how NAO might be used to improve outcomes for patients at Children’s Mercy Hospital (CMH) in Kansas City, Missouri. The class is an extension of his previous work with technology applications in health care design.

“Our job is to figure out how to repurpose technology that has been developed for different uses,” Thomas said. “In health care, how can it be utilized most effectively to enhance the patient’s experience?” For instance, the CDR experimented with a wayfinding system utilizing smart speakers for the KU Cancer Center last spring.

Thomas said he and his students first studied the problem they hoped to address: how to improve the health – both physical and emotional – of young hospital patients with serious illnesses. In addition to members of CMH’s psychiatric and Child Life departments, who deal with preteens, the KU students interviewed a group of teenage hospital patients.

“We asked them if they could talk to the robot about things they can’t talk about with their siblings or parents, and they were initially lukewarm until we suggested it might help with things like mitigating peer pressure, bullying and returning to school,” Thomas said.

From infants to teenagers, children who suffer from serious, chronic illnesses are susceptible to anxiety, loneliness and depression. Thomas said his group tried to think of how a robot friend might prevent or alleviate those conditions using its sophisticated communications capabilities.

“They spent as much time asking questions afterward as we did with the presentations themselves,” Thomas said.

All of the concepts used the robot’s speech and facial-recognition capabilities to serve as an educator and/or companion to the young patients. The goal was to relieve the patients of anxiety prior to certain medical procedures. In one scenario, NAO was able to detect if the patient was happy or sad and to relay information on the child’s frame of mind to his/her physicians. The robots also collected other critical data to help with the overall analysis of the child’s well-being.

Other concepts paired the robot’s sensing capabilities with a wearable device that could feed data from the patient to the robot and/or the hospital’s computer system. This could help long-term monitoring when the child is alone.

Thomas said the intent of the project was to study human interaction with humanoids.

“We didn’t invent the robots,” Thomas said. “We looked at how to tap into their potential a little differently.”

Thomas said the students utilized the principles of Interaction Design, sometimes shortened to IxD, which looks at a problem from the perspective of the end user and how he or she might interact with it. While IxD has an interest in form (like other design fields), it mainly focuses on behavior. The objective is rather than analyzing how things are, interaction design synthesizes and imagines things as they could be.

The robots were not envisioned as replacements for doctors, nurses or other critical hospital staff. Rather, they were conceived of mainly as companions and/or monitors.

“It’s about spending time with the kids that the doctors and nurses don’t have,” Thomas said. “And while they are spending quality time with the kids, every input that goes into the robot is data. It can then be looked at for things like pain management. When do they feel the worst? Why is the child not their usual self? All that information can be stored and analyzed so that when the next child needs pain management or has anxiety about their scheduled MRI, we have a clue what to look for.”

Thomas said the social aspect of a robotic companion might be as beneficial to a child in the hospital as its clinical one.

“The whole thing is about getting well,” he said. “If a child feels better psychologically, they might have a faster recovery. You can give them a friend or a partner that can help them.”

Thomas said the next CDR student project will respond to a request from the University of Kansas Medical Center staff to find a way to visualize and prioritize – at a glance — the data doctors get via remote patient-monitoring technology. Such remote monitoring is considered key to preventing readmission to the hospital.

Photos by Andy White, KU Marketing Communications.
Students (above) work with NAO in the Center for Design Research under the direction of Greg Thomas (below).