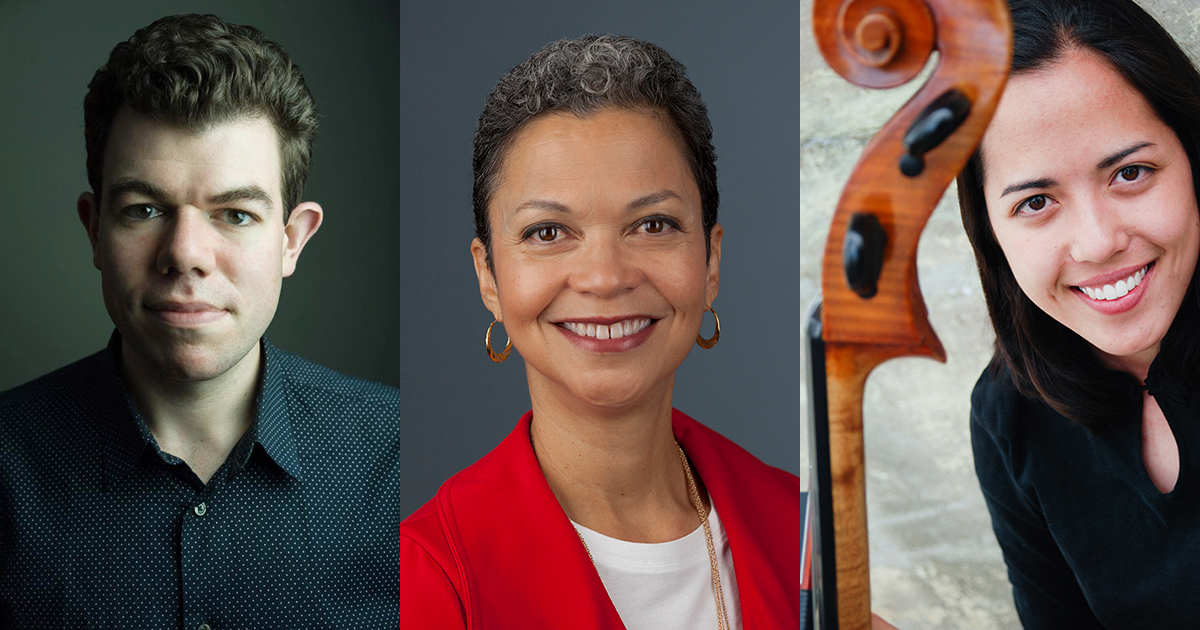 LAWRENCE — “DWB” is the rueful shorthand for “Driving While Black,” and it’s also the title of a new “chamber opera project” featuring the work of three University of Kansas School of Music teachers that has its initial staged reading at 7:30 p.m. today, March 5, in Swarthout Recital Hall.

Roberta Gumbel, lecturer in voice and opera; Hannah Collins, assistant professor of cello, and Michael Compitello, assistant professor of percussion, will perform the 45-minute work with music composed by Susan Kander and lyrics, or libretto, written by Gumbel, based on her own personal experience with the issue. Kander will be visiting from New York for the performance.

Gumbel said Kander approached her last year wanting to write something for Gumbel and New Morse Code, as the duet of Collins and Compitello is known, since she is friends with all three musicians. She and Kander considered several subjects to explore before the idea of DWB came up, Gumbel’s son having recently reached driving age. Gumbel said that, like many African-American parents in the wake of recent, infamous encounters that led to the shooting deaths of Trayvon Martin and Philando Castile, she worries that her son could be profiled or targeted by police for arrest or worse.

“She called me and said, ‘I know what I want to write about: your concerns for your son, an African-American boy behind the wheel in this time,’” Gumbel said. Kander's first choice to write the libretto was unavailable, she asked Gumbel, even though Gumbel had never written a song, much less an operatic piece.

Gumbel said she accepted the challenge and sat down to write out her thoughts in the form of vignettes — experiences from her own life or things she had heard about from relatives. She interspersed those scenes with “news bulletins” alluding to notorious cases like those mentioned above.

After Gumbel’s own editing process was complete, she said, Kander went to work with the words and “made it work with the musical shape of the piece.”  Kander herself is a former playwright who turned to musical composition years ago. Since then, Kander has written numerous operas and song cycles, among other things. But she knew that, as a white woman, she was not qualified to write the text to “DWB.”

“The story is mine, with other pieces thrown in,” Gumbel said. “There are four chairs on stage, representing the four seats in a car. The baby starts out in back in a child-safety seat. When he’s old enough, he gets to ride up front. This is how time is marked. Eventually I teach him to drive. The narrative is all leading up to, ‘How will I gather the courage to give him the keys to the car?’”

While there are four seats on stage, Gumbel is the only person who sings, though both Collins and Compitello participate in the dramatic action and speak occasionally. Gumbel’s character sings both her own thoughts as The Mother as well as the interstitial news bulletins delivered by a variety of other characters.

Gumbel said the piece was initially conceived as a song cycle but has morphed into a short, one-woman opera. Gumbel said she and Kander exchanged thoughts throughout the writing process. The performers and the composer will have a chance to rehearse a couple of times before the performance, which will be done score-in-hand. Where it goes from here is uncertain, Gumbel said.

“If the piece has legs after this, we will try to expand it so the relationship between mother and son has time to become richer,” she said. “It’s not about expanding it with more performers. Things like this need to percolate and get feedback.”

Admission to the performance is free, and there will be a talk-back session to follow.

Photo: School of Music faculty members Michael Compitello, (from left, above) Roberta Gumbel and Hannah Collins will collaborate on the premiere of "Driving While Black."