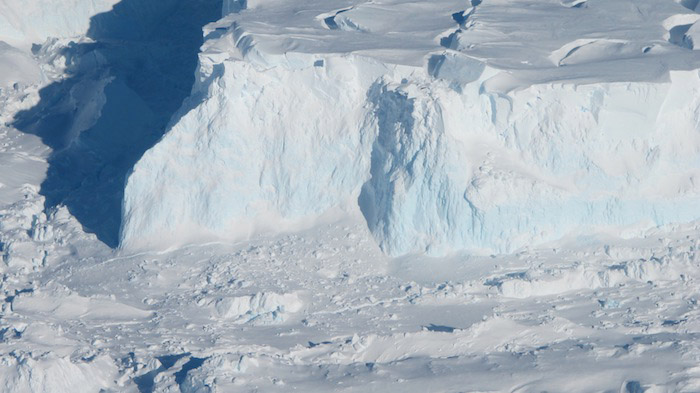 LAWRENCE — This week, an unprecedented group of about 100 scientists from the United States and the United Kingdom joined forces to establish the International Thwaites Glacier Collaboration, a five-year $25 million project billed as “the most detailed and extensive examinations of a massive Antarctic glacier ever undertaken.”

Funded by the U.K. Natural Environment Research Council and the U.S. National Science Foundation, the project will deploy scientists to one of the remotest regions of Antarctica to gather data on the timing of the enormous glacier’s collapse and the resulting rise in ocean levels around the world.

The ultimate goal is to provide policymakers a more accurate timeframe to prepare coastal communities around the world for higher oceans.

Two projects from the Center for Remote Sensing of Ice Sheets (CReSIS) at the University of Kansas will contribute to separate research projects within the collaboration. Leigh Stearns, associate professor of geology, and Carl Leuschen, director of CReSIS and associate professor of electrical engineering & computer science at KU, will contribute to GHOST, an ice-based project to examine the bed beneath the Thwaites Glacier and determine whether conditions are likely to allow rapid retreat, or if the retreat may slow or stop. Jilu Li, assistant research faculty at CReSIS, also will contribute to GHOST.

John Paden and Fernando Rodriguez, both associate scientists with CReSIS, will contribute to MELT, aimed at investigating the interaction of the ocean on the small Thwaites ice shelf and the grounding zone — the area where the glacier leaves the ground and begins to float on the water. Leuschen also will contribute to the MELT project. 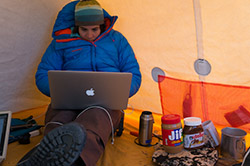 “In addition to the current NASA Operation Ice Bridge project, these two collaborations will continue KU's involvement in radar sounding of ice sheets, which has been an important research activity for almost three decades — since the early '90s,” said Leuschen. “Our involvement in these two project reflects the national and international recognition of CReSIS in developing and fielding some of the best radar instrumentation for ice sheet measurements.”

Stearns said to fully grasp the underpinnings of Thwaites Glacier ice flow, her research will focus on the topography of the bedrock underneath the ice.

“Thwaites is considered to be at its tipping point because it has a bed that goes deeper as it goes into the interior —  that’s seen as a sign of instability,” said Stearns. “It has a lot of ice-sheet mass behind it, and it’s been changing a lot in the past ten years — and it has the potential for exponential change in the future. With the data we’ll collect, we can better predict how rapidly and how far it will retreat in the future. The models that say it’s going to change exponentially aren’t well-qualified.”

As part of the GHOST team — headed by Sridhar Anandakrishnan of Penn State University and Andy Smith of the British Antarctic Survey (BAS) — Stearns and Leuschen will oversee deployment of a CReSIS-developed radar to map the bed topography underneath the Thwaites Glacier.

“The radar was developed at KU,” said Stearns. “It has been flown on campaigns to Greenland and Antarctica via NASA’s Operation Ice Bridge. We’re going to modify it to be dragged behind snowmobiles or bulldozers. It will map bed topography and the presence of water. What makes this project so exciting is while the radar has as its main function to get bed topography, we can accompany it with an array of geophysical instruments to get other properties. Is there water at the bed? How stiff is the ice? Is the bed made of soft sediment or bedrock? Active seismic measurements will help us measure how thick the layers of sediment or water are.”

Stearns said the character of bedrock underlying Thwaites Glacier will factor significantly in the rate and extent of its retreat.

“The fact that Thwaites gets deeper inland means it can have a kind of runaway ice loss,” she said. “Usually, if you have a bedrock high the glacier gets stuck on that and becomes stable. But if the glacier gets thicker and deeper as you go inland, there’s nothing that is acting as a brake on the acceleration. We’re trying to see if there are smaller-scale bumps that in our models prove important to slowing it down — or is it smooth and there’s nothing for the ice to get stuck on? Or is it wet or dry?”

While Stearns and Leuschen are mapping bedrock underneath the grounded ice, KU’s Paden and Rodriguez will use radar developed by CReSIS to measure the melting of Thwaites where the ice interacts with ocean waters. Part of the MELT project (headed by Keith Nicholls of the BAS and David Holland of New York University) will focus primarily near the grounding line — where the ice sheet starts to float on the ocean and becomes an ice shelf.

The accumulation radar at the center of the KU project led by Paden will be deployed on a BAS Twin Otter aircraft — the first time CReSIS has installed and operated with BAS. The survey also will deploy a set of ground-based radars to measure melt rate and “firn compaction” at specific points on the glacier.

“As more snow falls onto the ice, it compresses the snow underneath," said Paden. T"his compressed snow, called firn, eventually changes into ice and the accumulation radar can measure these changes. We’re going to go out this coming austral summer, installing the radar system on the BAS Twin Otter aircraft — the BAS will operate it for us this coming campaign and we’ll do it again after one or two years to measure changes caused by melting and compaction."

Paden said the work would help to establish the extent and timing of melting caused by warmer ocean currents on the bottom-side ice of the Thwaites Glacier.

“Climate change is warming the ocean and the warm circumpolar deep waters are coming up through channels to the ice shelf and melting them from underneath — that’s causing the glacier to retreat,” he said. “So, there’s warming from the atmosphere but also from underneath. But water’s ability to melt is much higher since water can transfer thermal energy much faster than air. So, in this project, there are things happening above ground and below ground in the ocean that we’re trying to track.”