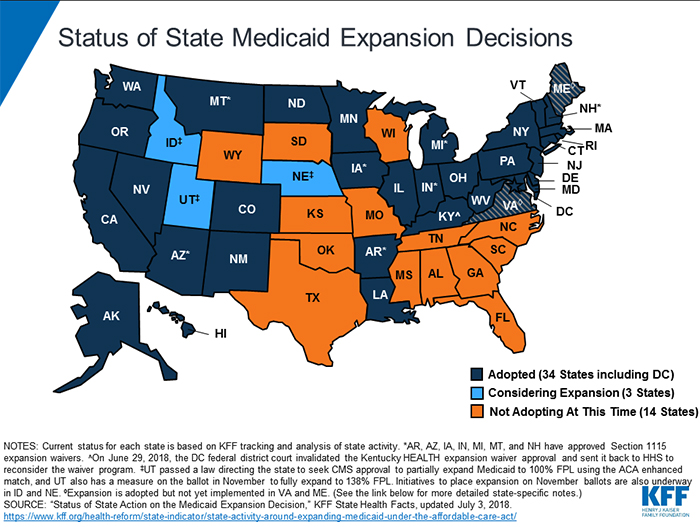 LAWRENCE — Individuals with disabilities are significantly more likely to be employed in states that have expanded Medicaid coverage as part of the Affordable Care Act, new research from the University of Kansas has found. Similarly, individuals who report not working because of a disability have significantly declined in expansion states, while neither trend happened in states that chose not to expand Medicaid.

The trends have broad policy implications as many states are considering work requirements for Medicaid eligibility, and they also have the potential to show similar employment benefits for individuals without disabilities. “In effect, Medicaid expansion is acting as an employment incentive for people with disabilities,” the researchers wrote.

The analysis builds upon previous research that showed individuals with disabilities in Medicaid expansion states were more likely to be employed than those in nonexpansion states. The researchers analyzed data from the nationally representative Health Reform Monitoring Survey for both studies. In the most recent, they had another year of data to analyze, from 2013 after the ACA was implemented, to 2017. The data showed that in 2013, 41.3 percent of individuals with disabilities in expansion states reported being employed or self-employed. In 2017, that number rose to 47 percent. In the same timeframe, the percentage of the same population that reported not working because of disability dropped from 32 to 27 percent. Those trends were not present in nonexpansion states.

“We corrected for employment statistics in all states. If unemployment rates were already lower in a state, we controlled for that when looking at disability and employment,” Hall said. “The takeaway is that, over time, these changes are becoming more robust. I would expect that to continue increasing over time. We also think you’d see the same trends for people without disabilities if you give it time.”

Individuals with disabilities were often confined to lives of poverty and/or unemployment to qualify for Medicaid, as those whose earnings were too high were deemed ineligible. Yet those who surpassed income limitations were still often unable to afford health insurance on their own. In nonexpansion states, most adults with disabilities are required to apply for Supplemental Security Income and undergo a disability determination to affirm they cannot substantially work to be eligible for Medicaid. The researchers postulate that the incentive for employment could expand to individuals without disabilities as well. For example, a childless adult with a chronic illness cannot apply for Medicaid in nonexpansion states. In expansion states, they would be able to do so and move from having no health insurance to being covered by Medicaid.

“Our argument is that, over time, those who are better able to manage their health would have a better ability to be employed,” Hall said.

The ability to work has benefits for individuals, their families and the state, the authors write. Having coverage and being able to gain employment makes individuals more independent, lowers unemployment and results in more people paying taxes and boosting state economies, while simultaneously reducing the number of people reliant on government programs such as food stamps, housing and child care subsidies and others.

The findings come amidst continuing debates about the Affordable Care Act, health care in America and work requirements for Medicaid eligibility. They help illustrate the importance of coverage and independence, the researchers stated.

“First of all, having health insurance is very important in the ability to work,” Hall said. “And I think we need to move away from a system where health coverage is predicated on living in poverty and not working. That’s counterproductive.”

Top image: A map shows the states that have expanded, have not expanded and are considering Medicaid expansion. Credit: Henry J Kaiser Family Foundation

Bottom image: A graph shows the decrease in individuals with disabilities who were not employed before and after their states expanded Medicaid. Credit: Study authors