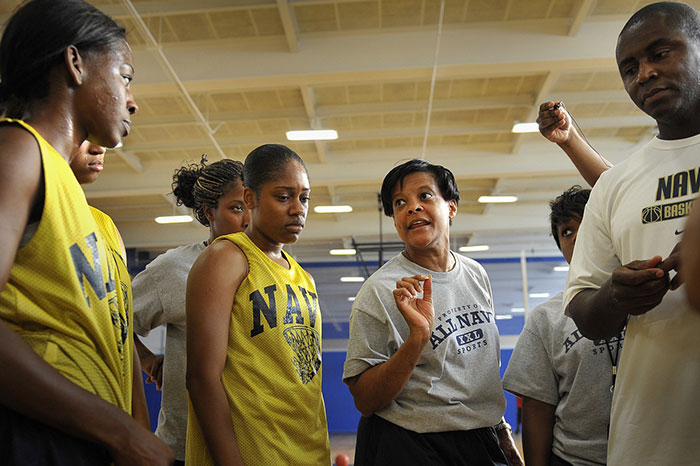 LAWRENCE — When female athletes have strong mentors, the relationship helps them combat issues of sexism and helps them navigate problematic behaviors, according to a study by two University of Kansas researchers.

"Mentorship and the feeling of mattering is really important to female athletes in dealing with issues of discrimination or bullying that can impede women's full participation in sports, such as playing on a mostly male team or confronting sexual harassment," said Kathryn Vaggalis, the study's co-author and a KU doctoral candidate in American studies.

Overall, when mentors instill self-esteem and the idea that the students' lives matter to others, it can boost athletic ability, provide opportunities for leadership and leave a positive effect on women's continued involvement in sports.

Vaggalis and co-author Margaret Kelley, KU associate professor of American studies, conducted 42 retrospective qualitative interviews with college undergraduates who were former high school athletes and identified teachers or coaches as natural mentors.  Natural mentors are those identified by students in their school environment rather than one assigned through a formal mentoring program.

The researchers will present their findings this week at the American Sociological Association's annual meeting in Philadelphia.

They found that mentors provided a safe space to receive advice and guidance from a trusted non-kin adult. Mentorship provided multiple benefits such as emotional support, reducing delinquency and instilling a positive work ethic.

Despite the positive findings that female athletes expressed that mentors helped empower them socially and athletically, the researchers also found mixed results elsewhere, including that mentors could reinforce problematic gendered aspects of sport socialization.

Male mentees, for example, cited less emotional support and open communication with their mentors than their female counterparts. And male-to-male mentors of young men tended to reinforce ideas of sports education through rhetoric of traditional masculinity, they found, though the participants expressed that this education improved self-esteem and work ethic, and also amplified athletic ability and performance.

However, the researchers also found that mentors — in reinforcing traditional masculinity — can exacerbate the problematic perception of sports serving as inherently male or masculine.

"Not all sports mentors are positive mentors. They can be problematic, too," Kelley said. "And the gender role socialization differences really spoke to us from the data in this regard."

Still, the researchers said the study indicates that natural mentorship and the idea of mattering are crucial in providing a positive influence on adolescents that can help reduce problem behavior and improve life chances.

"Sometimes kids are almost being discouraged from these relationships because there are so many boundaries in place between possible mentors," Kelley said. "Then they are losing out on these mentorships that can be deeply instructive."

The gender differences in the study can provide a caution for coaches and teachers who are in a position to mentor younger athletes, the researchers said.

"We need to be careful about recognizing sometimes we're continuing differences in inequalities in the way we treat boys and girls," Kelley said. " Looking at this allows us to be critical of the mentoring context and critically self-aware of how to help young people learn about gender and the world."

But their findings surrounding mentorship are also positive for several reasons, including stemming sexism that can impede women's participation in sports and serving as a positive influence for male students. The relationship between mentorship and mattering can be important in conversations surrounding how to prevent violence in schools and among youth, the researchers said.

"As adults we can make commitments to young people," Kelley said, "to reach out and to nurture them, make them feel like they are important, especially as natural mentors outside their families."