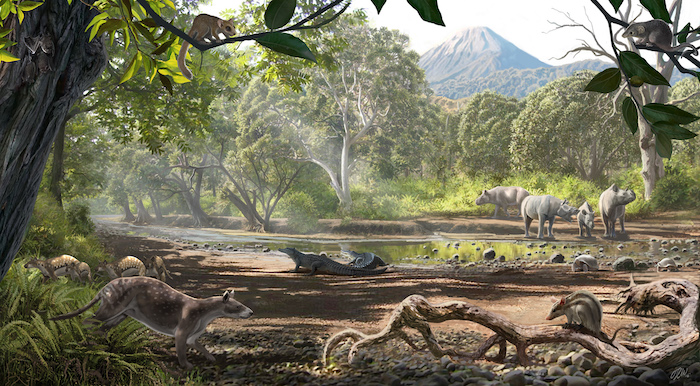 LAWRENCE — Islands have been vital laboratories for advancing evolutionary theory since the pioneering work of Charles Darwin and Alfred Russel Wallace in the 19th century.

Now, a new paper appearing in PLOS ONE from an international team of investigators describes two new fossil relatives of marsupials that shed light on how a unique island ecosystem evolved some 43 million years ago during the Eocene. 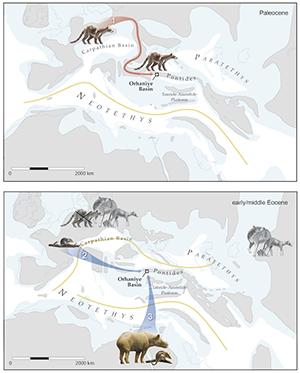 “Evolution in many ways is easier to study in an island context than on a large continent like North America because it’s a simpler ecosystem,” said co-author K. Christopher Beard, Distinguished Foundation Professor of Ecology & Evolutionary Biology at the University of Kansas and senior curator with KU’s Biodiversity Institute and Natural History Museum. “Evolutionary biologists have been focusing on islands ever since Darwin and Wallace independently formulated their ideas about evolution based on their observations of plants and animals living on the Galapagos and the Malay archipelago, which is modern Indonesia.”

However, Beard said a poor fossil record for animals living on islands through “deep time,” or across a multimillion-year time frame, has hampered our understanding of exactly how island ecosystems are assembled. The new paper describes two new fossil species, identified from their teeth, that inhabited the Pontide region of modern-day north-central Turkey.

During the Eocene, the Pontide region was an island in a larger version of the modern Mediterranean Sea called Tethys. At that time, Africa and Eurasia were not connected as they are today in the Middle East, but Africa was drifting northward due to plate tectonics and would eventually collide with Eurasia millions of years later. The Pontide region was sandwiched between these converging continents. This geological setting makes the Pontide region similar to the island of Sulawesi in the Indonesian archipelago, which is similarly sandwiched between the converging continents of Asia and Australia.

“No other ecosystem on the face of the planet from any time period matches what we’re finding in the Eocene of Turkey — it’s a completely unique mammalian ecosystem much like Madagascar is today,” he said. “But how did this island biota develop over time? You need fossils and time depth to see that. We’re able here to study in great detail how this ancient island evolved — where the different animals came from, how they got there and when they got there. Once they got there, some of these mammals, including one of the new marsupial lineages we’ve discovered, were able to diversify on the island. Most of the Eocene mammals on the Pontide island seem to have gotten there by swimming or rafting across parts of the Tethys Sea, instead of getting stranded on the island when it got separated from adjacent parts of Eurasia.”

Beard’s collaborators in the research were Grégoire Métais of the Museum national d’Histoire naturelle in Paris, John Kappelman of the University of Texas, Alexis Licht of the University of Washington, Faruk Ocakoğlu of Eskişehir Osmangazi University in Turkey and KU’s Pauline Coster and Michael Taylor.

Ocakoğlu, from the hosting Eskisehir Osmangazi University, said, "The state-of-the-art results reported in this study benefited immensely from several decades of previous research on the geology of this part of Turkey by many devoted Turkish geologists."

In the Pontide marsupial fossils, which have no living descendants, the team found evidence that distinctive forms of life that develop on islands are ill-fated in general, given enough time.

“One thing we know for sure is that the incredibly interesting and unique Eocene biota that occurred on this island in what is now Turkey at some point was totally eradicated,” Beard said. “It was eradicated when the island was reconnected to mainland Eurasia and more cosmopolitan animals were able to access it for the first time, driving the weird island biota to extinction. The message for conservation biology today is that island ecosystems are inherently ephemeral on the grand scale of macroevolutionary time. Today, conservation biologists are concerned about many endangered taxa on islands. The ugly truth that paleontology provides is that, given enough time, most island faunas are doomed to extinction. They’re cul-de-sacs of evolution — even though they’re wonderful places to study processes of evolution.”

Beard said the two newly described fossil marsupials — Galatiadelphys minor and Orhaniyeia nauta — lived near the top of the food chain on the Pontide of the Eocene, because mammalian carnivores were unable to reach the small island.

“One of weirdest things about the island fauna from the Pontides is that there are no true mammalian carnivores,” he said. “There was nothing related to cats, dogs, bears or weasels — no modern mammalian predators. They couldn’t get to the Pontide terrain because it was a little island. So, these marsupials ecologically are taking their place at the top of the food chain.”

According to the KU researcher, the newly discovered fossils demonstrate geological context has a huge influence on how ecosystems are assembled on any given island.

“Current ideas about island evolution are based on some fairly simplistic, yet fairly effective, models,” Beard said. “These models propose that organisms colonize islands based on two main factors — how big is the island and how far away is it from nearby continental landmasses? A bigger island makes a bigger target and hosts a greater diversity of habitats, making it easier for organisms to colonize the island, and once they get there they have a better chance of surviving and maybe even diversifying.”

Based on his team’s findings from the Pontide region, Beard said that geological context was at least as important as an island’s size or distance from colonizing animals’ source territory.

“All men may have been created equal, but all islands were not. The geological context of the island — here it’s in a region of active tectonic convergence — we think is swamping these other factors, size and distance to mainland,” he said. “The oddest thing about the Pontide mammal fauna is that it contains a unique mixture of animals coming from Europe, Africa and Asia. Even our two new marsupials show different evolutionary roots in the north and the south. This makes sense because the Pontide island was being sandwiched between Eurasia and Africa, and animals were arriving there from multiple directions. We can make an interesting analogy with the modern island of Sulawesi in Indonesia, which like the Pontide terrain has a mixed fauna. It mainly hosts animals like tarsiers, pigs and shrews that are clearly related to Asian species, but you also have on Sulawesi species that are obviously related to mammals from New Guinea. If you look at plate tectonics today, Sulawesi is getting sandwiched between Australia and Asia in much the same way the Pontide was being sandwiched between Africa and Asia in the Eocene.”

Beard recently returned from Turkey where he and his team conducted more fieldwork. This research was funded by multiple sources, including a major grant from the National Science Foundation.

Top image: A reconstruction of the Eocene of Turkey, where the small marsupial was found. Besides the marsupials, the fauna includes embrithopods (the rhino-like animals of the background, more related to elephants and sea cows), pleuraspidotheriids (primitive ungulates with a deer/dog look), a group of primates called omomyids, bats, tortoises and crocodiles." Credit: Oscar Sanisidro.
Right image: The migration patterns of different groups of mammals during the Eocene and the pivotal role of Turkey not only as a necessary stop for African/Eurasian faunal migration events but as a refuge for some of them. Credit: Oscar Sanisidro