LAWRENCE — A senior from Fort Worth, Texas, is the first University of Kansas student to win a George J. Mitchell Scholarship. 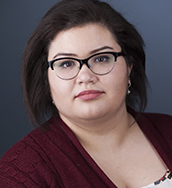 Kathryn Ammon learned on Saturday that she was one of 12 students from across the country to receive the award from the 370 students who applied. She was also the only recipient from a public school.

“Kathryn’s commitment to improving the world around her is inspirational, and we are proud to have her representing KU among this outstanding group of talented scholars from around the country,” said Chancellor Douglas A. Girod. “I congratulate her and all who have contributed to her success, and look forward to seeing where this path will take her next.”

The scholarship program, which sends future American leaders to the island of Ireland for a year of graduate study, is named in honor of former U.S. Sen. George Mitchell's contributions to the Northern Ireland peace process.

Ammon is a triple major in history, political science and women, gender & sexuality studies, and she plans to study equality studies at University College Dublin. She is committed to advocating for marginalized students on campus, and she has worked on reproductive rights since her freshman year at KU.

She said she has been inspired by other activists in Kansas, who often serve as their own grassroots organizers, policy directors and lobbyists, and she has considered options such as going to law school and pursuing civil rights law as a career.

Ammon said she was taken by surprise when she learned she won the award, and she credited the many who helped her along the way at KU and beyond.

“I’ve been proud to have always gone to public school, and it feels good to be able to represent my school and my state,” Ammon said. “I’m looking forward to learning more about the forces that shape the world we live in and how we can better understand these forces and find a better future.”

She has served as president of Students United for Reproductive and Gender Equity and as a student facilitator for the Office of Multicultural Affairs' Colors of KU Social Justice retreat.

She was elected to Student Senate, then nominated to the universitywide governing body, the University Senate.  She has worked on reproductive justice issues with an indigenous feminist collective in New Mexico and with Planned Parenthood Great Plains. As a junior, she completed a history thesis in American labor history and received the W. Stitt Robinson Award for American History in May 2018. Also as a junior, she was elected to the Phi Beta Kappa honor society.

Kathy Rose-Mockry, director of KU’s Emily Taylor Center for Women & Gender Equity, has worked with Ammon throughout her KU career and said that Ammon exemplified KU’s tradition of excellence and was an ideal candidate for the Mitchell Scholarships.

“Kathryn’s impressive intellectual skills, academic achievements, reproductive justice work and leadership on campus and in the community earned her this remarkable award,” Rose-Mockry said. “Kathryn will continue to lead the way in advocating for women and those who are marginalized.”

The Office of Fellowships, a unit of Undergraduate Studies, coordinates KU's endorsement process for these awards and supports candidates through the application process. Students interested in applying for awards in future years are encouraged to contact the office by email at fellowships@ku.edu.