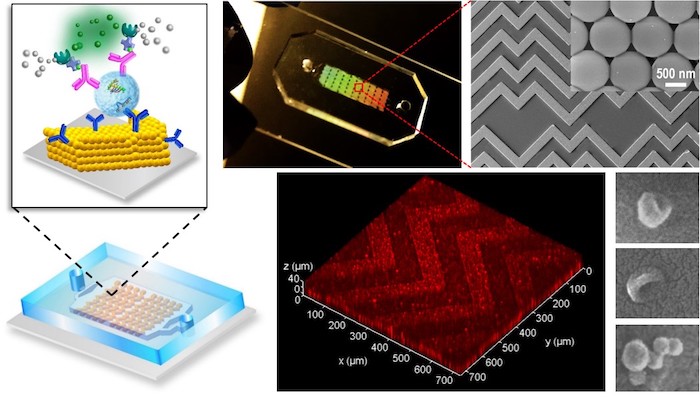 LAWRENCE — A new ultrasensitive diagnostic device invented by researchers at the University of Kansas, The University of Kansas Cancer Center and KU Medical Center could allow doctors to detect cancer quickly from a droplet of blood or plasma, leading to timelier interventions and better outcomes for patients.

“Historically, people thought exosomes were like ‘trash bags’ that cells could use to dump unwanted cellular contents,” said lead author Yong Zeng, Docking Family Scholar and associate professor of chemistry at KU. “But in the past decade, scientists realized they were quite useful for sending messages to recipient cells and communicating molecular information important in many biological functions. Basically, tumors send out exosomes packaging active molecules that mirror the biological features of the parental cells. While all cells produce exosomes, tumor cells are really active compared to normal cells.”

The new lab-on-a-chip’s key innovation is a 3D nanoengineering method that mixes and senses biological elements based on a herringbone pattern commonly found in nature, pushing exosomes into contact with the chip’s sensing surface much more efficiently in a process called “mass transfer.”

“People have developed smart ideas to improve mass transfer in microscale channels, but when particles are moving closer to the sensor surface, they’re separated by a small gap of liquid that creates increasing hydrodynamic resistance,” Zeng said. “Here, we developed a 3D nanoporous herringbone structure that can drain the liquid in that gap to bring the particles in hard contact with the surface where probes can recognize and capture them.”

Zeng compared the chip’s nanopores to a million little kitchen sinks: “If you have a sink filled with water and many balls floating on the surface, how do you get all the balls in contact with the bottom of the sink where sensors could analyze them? The easiest way is to drain the water.”

To develop and test the pioneering microfluidic device, Zeng teamed with a tumor-biomarker expert and KU Cancer Center Deputy Director Andrew Godwin at the KU Medical Center’s Department of Pathology & Laboratory Medicine, as well as graduate student Ashley Tetlow in Godwin’s Biomarker Discovery Lab. The collaborators tested the chip’s design using clinical samples from ovarian cancer patients, finding the chip could detect the presence of cancer in a minuscule amount of plasma.

“Our collaborative studies continue to bear fruit and advance an area crucial in cancer research and patient care — namely, innovative tools for early detection,” said Godwin, who serves as Chancellor's Distinguished Chair and Endowed Professor in Biomedical Sciences and professor and director of molecular oncology, pathology and laboratory medicine at KU Medical Center. “This area of study is especially important for cancers such as ovarian, given the vast majority of women are diagnosed at an advanced stage when, sadly, the disease is for the most part incurable.”

What’s more, the new microfluidic chips developed at KU would be cheaper and easier to make than comparable designs, allowing for wider and less-costly testing for patients.

“What we created here is a 3D nanopatterning method without the need for any fancy nanofabrication equipment — an undergraduate or even a high school student can do it in my lab,” Zeng said. “This is so simple and low-cost it has great potential to translate into clinical settings. We’ve been collaborating with Dr. Godwin and other research labs at The KU Cancer Center and the molecular biosciences department to further explore the translational applications of the technology.”

According to Zeng, with the microfluidic chip’s design now proven using ovarian cancer as a model, the chip could be useful in detecting a host of other diseases.

“Now, we’re looking at cell-culture models, animal models, and also clinical patient samples, so we are truly doing some translational research to move the device from the lab setting to more clinical applications,” he said. “Almost all mammalian cells release exosomes, so the application is not just limited to ovarian cancer or any one type of cancer. We’re working with people to look at neurodegenerative diseases, breast and colorectal cancers, for example.”

On KU’s Lawrence campus, Zeng worked with a team including postdoctoral fellow Peng Zhang, graduate student Xin Zhou in the Department of Chemistry, as well as Mei He, KU assistant professor of chemistry and chemical engineering.

This research was supported by grants from National Institutes of Health, including a joint R21 (CA1806846) and a R33 (CA214333) grant between Zeng and Godwin and the KU Cancer Center’s Biospecimen Repository Core Facility, funded in part by a National Cancer Institute Cancer Center Support Grant (P30 CA168524).

Image: The new lab-on-a-chip’s key innovation is a 3D nanoengineering method that mixes and senses biological elements based on a herringbone pattern commonly found in nature, pushing exosomes into contact with the chip’s sensing surface much more efficiently in a process called “mass transfer.”  Credit: Yong Zeng