LAWRENCE — A gift of more than $2.8 million from the estate of a California couple who were native Kansans will fund scholarships for medical students at the University of Kansas School of Medicine. 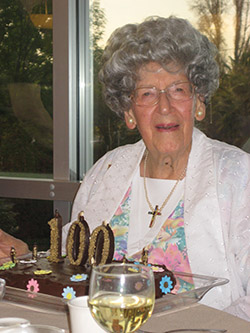 Alton and Helen Knechtel, of Chula Vista, California, were married in 1936. Alton was born in Larned, and Helen was born in Alma. He died in 1984 after battling Alzheimer’s disease, and she died in 2018.

“Alton’s medical condition was probably the reason the couple chose to leave the gift to the medical school,” said Kimberley Price, of Encinitas, California, a family friend of Helen Knechtel’s for over 40 years. “She felt she could make an impact on more people in the long run by supporting students to become doctors.”

Dr. Mark Meyer, senior associate dean for student affairs at the School of Medicine, emphasized the importance of these scholarships for KU medical students.

“Our medical students’ average debt at graduation is over $180,000. Scholarship funds truly make a difference to each recipient and help lighten their financial load while in medical school and beyond,” Meyer said.

Dr. Robert Simari, executive vice chancellor of KU Medical Center and executive dean of the medical school, expressed his gratitude for the Knechtels’ generosity and vision for students in the medical field.

“I would like to personally extend my gratitude to the estate of the late Alton and Helen Knechtel for this significant gift that will help our students with a critical need to help fund their education and reduce their debt load,” Simari said.

Helen Knechtel, whose maiden name was Augusta Helen Mueller, earned a music degree from Stephens College in Columbia, Missouri. She also studied music at KU and was a member of Mu Phi Epsilon, the honorary music sorority. Alton Knechtel attended Kansas State University, where he earned a degree in architectural engineering.

Alton Knechtel joined the U.S. Navy as an engineer, and the couple moved frequently as his assignments required. They settled in California in the 1960s after his retirement, lured by the good weather after many years on the East Coast.