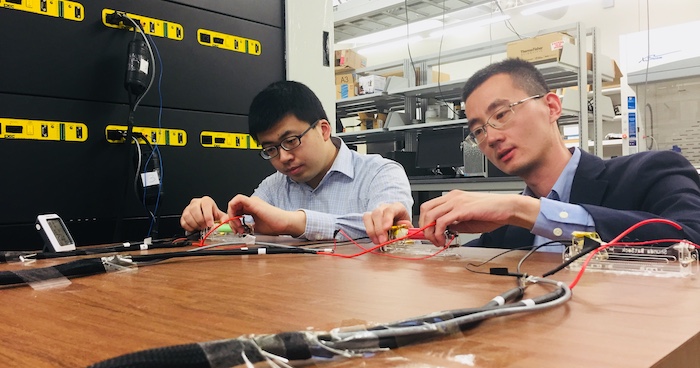 LAWRENCE — You could have a lithium-ion battery in your pocket right now, powering your mobile phone or e-cig. If you have a laptop computer in your backpack, it probably runs on a lithium-ion battery. Or you might drive a Toyota Prius, Chevy Volt or Tesla powered by a large number of lithium-ion battery cells combined together. These batteries also have been used in everything from Boeing 787 jets to U.S. Navy ships. 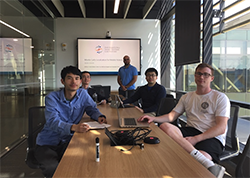 As useful and pervasive as lithium-ion batteries have become, they also pose some risk. Because lithium metal is highly reactive, these batteries and cells can experience “thermal runaway,” meaning they can overheat and catch fire or even explode. Though rare, these incidents — like when an aircraft’s lithium-ion battery overheated last year on a flight to Paris — have earned headlines and raised public alarm over lithium-ion technology.

Now, supported by a new five-year, $500,000 grant from the National Science Foundation, a researcher from the University of Kansas is developing technology to monitor and prevent overheating in lithium-ion batteries. Huazhen Fang, assistant professor in the Department of Mechanical Engineering, and his students will develop machine-learning approaches to monitoring temperature inside the batteries.

“Nowadays these lithium-ion batteries are everyplace in our society,” Fang said. “They’re popular because they have many advantages, including high energy and power density, long cycle life, high voltage compared to other batteries and a low self-discharge rate. During the past decade, lithium batteries have become the most popular batteries for energy storage. But they’re vulnerable to thermal events. They can easily catch fire or have thermal explosions when ambient temperatures are high or when some internal failures occur. That’s because the lithium metal is highly reactive, and the commonly used electrolyte is flammable.”

Presently, most technologies to track the temperature of lithium-ion batteries are inadequate because sensors only can read the outside surface temperature of the batteries, according to the KU researcher.

“Usually, the temperature on the surface is insufficient to tell us about the state of the cell,” Fang said. “The internal temperature would tell us more about thermodynamics. But today there are few methods to place sensors inside a battery. However, using artificial intelligence and machine learning, we can predict the temperatures inside the cell that would give us the leverage to detect its behavior. The temperature at the surface would provide abundant data to be fed to a machine-learning approach and combined with mathematical models to predict what’s going on inside the cell.”

Rather than assuming a uniform temperature throughout a battery, as is the case with a present-day modeling approach called “lumped parameter models,” Fang said his computer-learning technique could predict variations in internal temperatures inside a battery — a more accurate and realistic means to calculate a battery’s potential to undergo thermal runaway.

Fang said data from a lithium-ion battery fed into artificial intelligence to deduce internal temperatures could be processed in the device powered by the battery, or linked to cloud computing. If a battery undergoes thermal runaway, the device would be programmed to shut down or disconnect the battery before it becomes hot enough to catch fire or trigger an explosion.

With these innovations, lithium-ion batteries could be scaled up to more industrial levels via cells that bundle hundreds of batteries together. According to Fang, lithium-ion technology increasingly could be used in massive electrical grids to store and discharge electricity generated by sustainable technologies like solar and wind.

“The problem is more pressing for large systems as they face higher vulnerabilities,” he said. “In large systems, if one cell catches fire, then a domino effect will devastate the entire system. Nowadays, people across the industry are thinking of developing larger-scale energy storage based on lithium-ion systems. But the thermal-safety issue could slow the pace of the use of lithium-ion batteries for future grid energy systems. If successfully accomplished, our project can help address this challenge and widen the deployment of lithium-ion battery technology to make our society more sustainable.”

As part of the work under the new grant, several KU students will be trained in the battery modeling, data analysis and machine learning to develop the desired models and methods that will potentially push the thermal safety of batteries to new heights.

More than that, Fang will continue his partnership with the Youth Services Department of Douglas County to bring well-designed outreach to kids and teens incarcerated in juvenile detention, providing them an additional avenue to STEM education and training that’s entertaining and stimulating.

“I want to do that because there are many young people in detention in the U.S.,” Fang said. “According to the Department of Justice, there are about 60,000 young people between ages 10 to 18 incarcerated every day across the country. Some studies show they have less access to high-quality education, even though it’s so important to their future life. In particular, they are generally underserved in STEM education compared to their peers in public schools.  I hope to inspire students’ interest in education and even careers in STEM areas and help them get prepared for a brilliant future.”