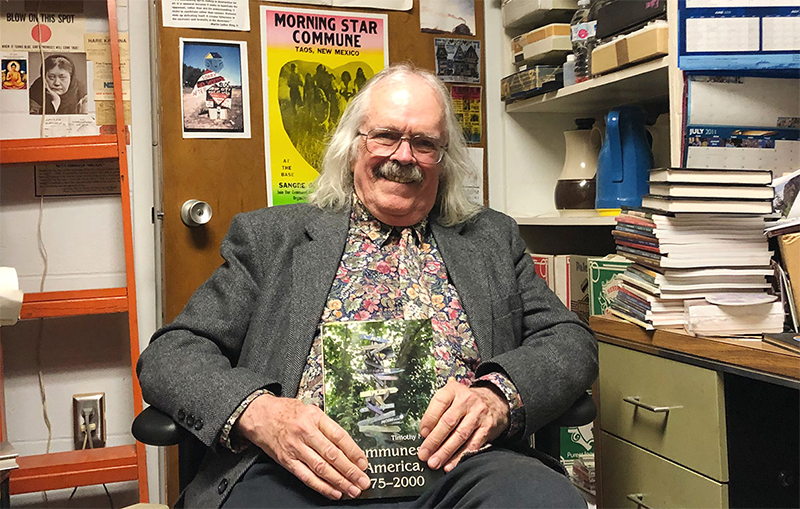 LAWRENCE – Despite the dissolution of back-to-nature hippie havens and murderous tragedies like Jonestown and the Branch Davidians, communes are alive and well in the 21st century, according to the author of a new book that completes his trilogy on the subject.

Timothy Miller, professor of religious studies at the University of Kansas, has just published “Communes in America, 1975-2000.” It follows his “The Quest for Utopia in Twentieth-Century America, Volume I, 1900-1960” and “The 60s Communes: Hippies and Beyond,” all from Syracuse University Press.

“Rumors of the demise of the commune are greatly exaggerated,” he wrote in the latest book.

Miller will give a talk and sign copies of his books from 1:30 to 3 p.m. Monday, May 6, at the Jayhawk Ink Lounge in the Kansas Union.

Miller said that while communes peaked in the 1970s, he sees a likely resurgence in the offing, particularly in the form of the cohousing movement for aging baby boomers like himself.

Miller lived in a commune outside Lawrence for a time during the 1970s, and he has always been fascinated by the subject.

“My specialty was new religious movements,” Miller said. “I’m just intrigued with people that do things differently, people who go against the flow.”

He has visited many communes in his travels around the country and interviewed many of their leaders. He is a member of the Communal Studies Association.

Miller tries throughout the new book to tamp down hysterical reactions, pointing out the many more peaceful, successful communal forms of living, in contrast with the few high-profile failures, which he also sketched.

Even so, he wrote, communards are swimming upstream in ruggedly individualistic America.

“There is a powerful legacy of social fear of cooperation in the United States … aggravated by the fear of communism that became pervasive after the Bolshevik Revolution,” Miller wrote. “To a remarkable number of people, cooperation was simply subversive.”

And yet Miller pointed out that there are many American communes established by members of mainstream religions — Christian, Jewish, Buddhist and Hindu. The largest group of communes in North America, he noted, are those of the Hutterites, German-speaking Christians who came to the United States from Central Europe in the 1800s.

Some other large groupings are less mainstream in terms of religion. The single largest communal enterprise in North America today, Miller says, is based in state line-straddling Colorado City, Arizona, and Hildale, Utah, established in 1928 by a breakaway group of Latter-day Saints and now led by convicted child-bride abuser Warren Jeffs. In the 2010 census, more than 5,000 people lived there, many adults practicing forms of plural marriage.

Miller pointed out that not all communes have a religious purpose.

He wrote, “Most American communes see themselves as either arks or lighthouses. In the former case, communitarians band together to protect themselves from the outside world – from environmental collapse, millennial tribulation or other threats of disaster or catastrophic change. In the latter, persons equally despairing, perhaps, but nevertheless hopeful … build communities as shining examples of just how wonderful the world could be if we would live in better ways ...”

Miller wrote that whereas he once saw those two forms as mutually exclusive, some communes he calls “ecovillages” try to combine those two ethics.

And even in tragic cases spurred on by religious belief like the Branch Davidians and Jonestown, Miller evinces sympathy for the communards under the sway of charismatic, if twisted, leaders. It’s not their fault that the neighbors fear anything different from their single-family-housing way of life.

“Pressure from neighbors has led to the demise of many an intentional community,” Miller wrote. “The well-entrenched fear of the ‘different’ surfaces repeatedly when a community emerges in just about any existing neighborhood, urban or rural.”