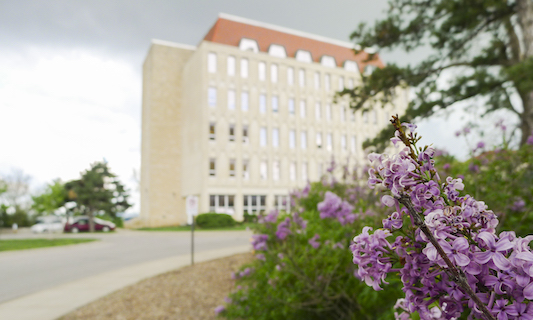 LAWRENCE — The Institute for Policy & Social Research (IPSR) has announced that Donna Ginther will serve as its interim director starting in June. Ginther is a Dean's Professor of Economics and director of the Center for Science, Technology & Economic Policy at IPSR.

Steven Maynard-Moody, professor in the School of Public Affairs & Administration, will step down from his position as IPSR’s longtime director at the end of May and will continue on at KU as a faculty member.

IPSR is a faculty-driven research center supporting social scientists who focus on social problems and policy-relevant questions. With affiliates ranging from across the university, IPSR’s work crosses disciplinary boundaries to address pressing social needs. IPSR has six research centers that reflect this interdisciplinary focus and holistic approach to research development and support: the Center for Environmental Policy, the Center for Military, War, and Society Studies, the Surveillance Studies Research Center, the Center for the Study of Injustice, the Center for Indigenous Science, Research & Technology and CSTEP.

IPSR’s portfolio of funded research projects includes National Science Foundation grants to faculty and graduate students, funding from local private foundations and support from state government agencies. The center's work extends to events to promote research findings; to convene conversations among scholars, policymakers and community members; and to build a community of social science researchers at KU. IPSR also runs a yearlong workshop for graduate students, the IPSR Doctoral Fellows, with an eye to providing the professional development they seek and a goal to enhance the training of these emerging social scientists.

Each year, IPSR hosts the Kansas Economic Policy Conference. The conference most recently addressed Pragmatic Policy: Reforming Kansas Taxes. Previously the conference has focused on the topics of the economics of immigration, healthcare, and public education. Attendees and speakers include representatives of local government, businesses, and nonprofit organizations alongside academics and legislators.

IPSR also publishes the Kansas Statistical Abstract each year. This report contains the latest available state, county, and city-level data for Kansas on population, vital statistics and health, housing, education, employment, agriculture, and other topics. The report helps local governments, businesses, and scholars in Kansas identify patterns and make decisions. Extending this work, IPSR was also recently named the lead agency for the State Data Center for the state of Kansas.

Ginther has similarly broad and deep experience in social science and policy-relevant research. An economist, Ginther explores scientific labor markets, gender differences in employment outcomes, wage inequality, scientific entrepreneurship and children’s educational attainments. She has received support for her research from diverse agencies, including the National Science Foundation, the National Institutes of Health, the Centers for Disease Control and Prevention, the Kansas Board of Regents and the Alfred P. Sloan Foundation. Her current federally funded research includes evaluating a mentoring program intended to promote women’s careers in economic science and a study on the effects of state-level welfare policies on child abuse and neglect.

In addition to her accomplishments as a researcher and center director, Ginther has been recognized for her teaching and mentorship. She received the Byron T. Shutz Award for Excellence in Teaching in 2012 and was a finalist for the Honor for the Outstanding Progressive Educator (HOPE) Teaching award in 2016.

Looking ahead, Ginther will continue IPSR’s commitment to providing research support to KU faculty as well as service and outreach to the state.

“I’m excited and humbled by the opportunity to lead IPSR into its third decade," Ginther said. "I look forward to working with IPSR staff, center directors, affiliated faculty and graduate students on expanding the breadth, visibility and impact of policy and social science research at KU.”

And after 20 years of leading IPSR, Maynard-Moody will miss the research center he so thoughtfully cultivated, but he knows IPSR is in capable hands.

"For the past 20 years, IPSR has worked with creative faculty and doctoral students across KU to help them secure and manage the external funding so necessary to pursue top-level research," Maynard-Moody said. "There is no one better than Donna Ginther to lead IPSR into the future."