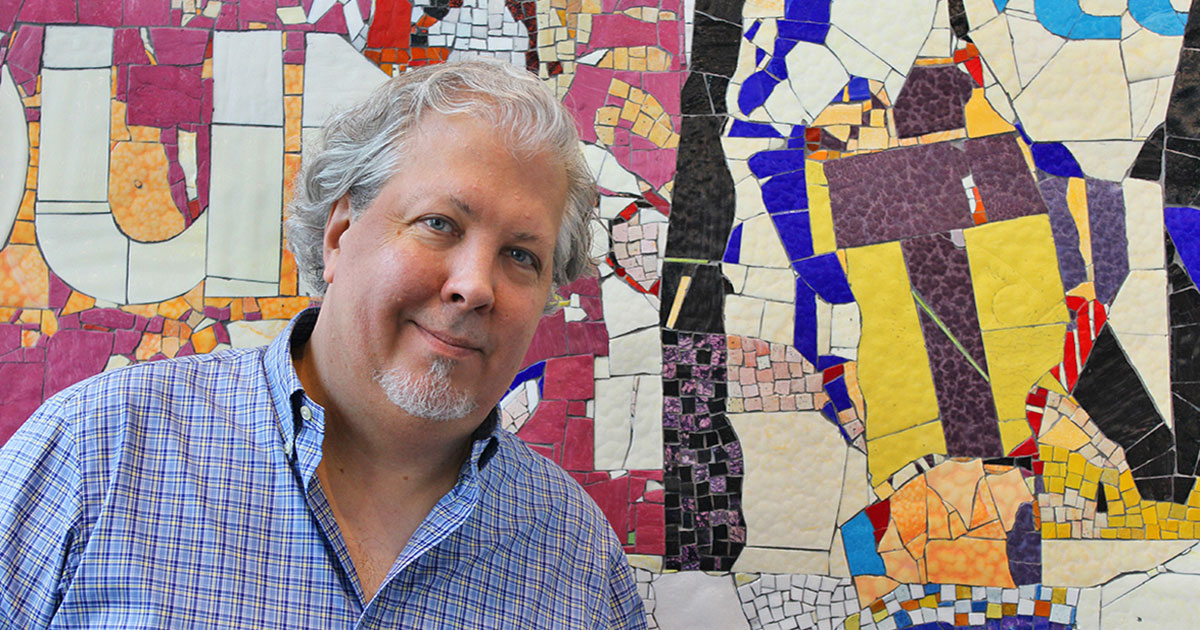 LAWRENCE — If we accept French writer Jean Cocteau’s dictum that great literature is “simply a dictionary in disorder,” then Stephen T. Johnson’s 2-story-tall mosaic triptych featuring the alphabet and animating the new Lenexa City Center branch of the Johnson County Public Library can be said to encompass all the books on the shelves.

The 23 1/2-by-5 1/2-foot panels are not the largest public art project the University of Kansas School of Architecture & Design lecturer has done, but they are the tallest. Johnson’s horizontal mosaic murals at New York’s DeKalb Avenue Subway stop and Los Angeles’ Universal City Metro Station are the largest and most prominent of his public art works. But he’s pleased with the way the new installation, titled “Interconnections,” came out, even if he had to push himself to satisfy the commission.

“This was a 1 percent-for-art project,” Johnson said, “so they had a national competition, which I was thrilled and honored to win.” 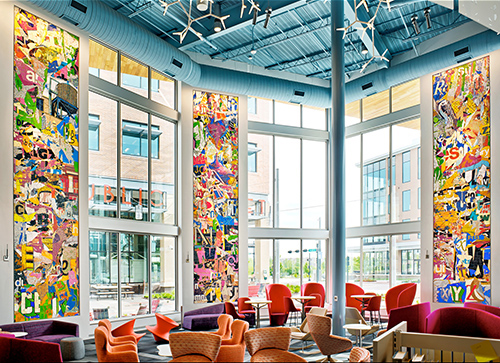 However, Johnson said, a member of the advisory panel that chose the work – library community relations coordinator and artist Christopher Leitch — urged him to “come up with something more unique and personal,” suggesting he use his children’s book series as a jumping-off point.

So Johnson went back and incorporated some of the letter images from the books, adding a mélange of other typographical fonts, to come up with his final designs for the project. As he wrote in the text of an explanatory plaque, the first panel from left “celebrates” the letters A to I, the second panel J to Q and the third panel R to Z.

He explained that he creates his imagery largely using the Adobe Photoshop computer program, which allows him to manipulate and layer images, much like a collage of physical objects.

“I scan a lot of different things into the computer,” Johnson said, “including my own abstract work. I find typography in books, posters and magazines, and then I start to change sizes and colors and move them around the page. I have a mind-bending number of layers on the screen.

“Then I will print them out, cut and collage them anew, rescan them back into the computer and, at a certain point, I say enough is enough. Do I have all the letters? Then it has to be translated into mosaics.”

As with previous monumental projects, Johnson worked with the artisans of Franz Mayer of Munich Inc. They take his digital designs and translate it into a mosaic – or, rather, the design and the pieces of colored glass for a mosaic – in their studios.

Johnson visited Munich at that stage to give his approval, then watched earlier this year as two German artisans followed the guide and built up the mosaics on the walls of the library. It was a 10-day process of gluing, grouting and polishing, Johnson said.

Johnson enjoyed attending the library’s June 2 grand opening. There it could be seen that the architects had carried his alphabet theme into more of the building, etching letters into the milky-white glass panels that line the balconies overlooking the atrium and its mosaics.

“It’s extremely satisfying because of the context,” Johnson said. “The library is so beautiful, and everyone involved was very enthusiastic. The project managers were a joy to work with. The fact that the city council members and the mayor and the architect thought it looked great gives me a great deal of satisfaction – that my efforts were acknowledged and well-received.”

Johnson said he hopes library patrons will find repeated viewings of the work rewarding. It has already been that way for him.

“I hope in multiple viewings you will discover little passages of color harmonies, areas that you hadn’t seen before,” he said. “I have — even though I designed it. With mosaics, there is a tactile quality you really have to see to appreciate.”

Johnson said he thinks the mosaics will have even further uses, too.