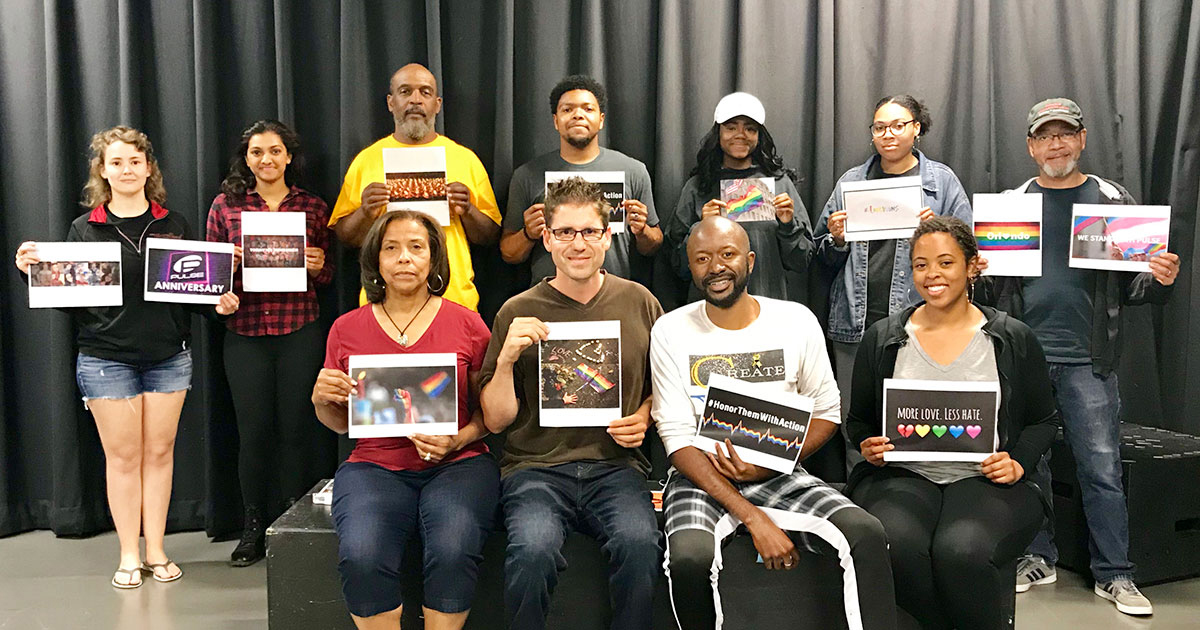 LAWRENCE – Can we tolerate intolerance? If so, how? And why should we?

Like someone dreading a holiday-dinner encounter with a bigoted family member, those are the questions playwright Paris Crayton III and director Markus Potter pose with the initial workshop production of “Chasing Gods” this month.

Set in the aftermath of the 2016 shooting massacre of 49 patrons at Orlando’s Pulse nightclub, “Chasing Gods” examines the family life of a fundamentalist Christian clergywoman, Deidra Curtis, who is compelled to use biblical scripture to condemn the lifestyle of the LGBTQ+ community.

Because of its focus on creating “radical empathy” among audience members, Potter said, “Chasing Gods” is the most important play he can do right now.

“It is not only a reflection on a specific moment after the Pulse tragedy, but it's also timeless in that we're challenging the audience to understand someone who would make incendiary comments in a moment of communal grief,” Potter said. “We’re wondering about this idea of radical empathy. How do we respond to hate speech? How do we respond to intolerance? How do we respond in a way that doesn’t make us like the people we think are wrong?”

“Someone could ask, ‘Why are we trying to understand?’” Someone could say, ‘We have to draw a red line. We cannot be tolerant of hate speech.’ But I think the radical power in empathy is saying, ‘O.K. We don't need to tolerate hate speech, but we can push ourselves to understand another person's perspective, which may allow us to respond in more constructive ways.’”

“When I think of the play, I think of the Charleston shooting. I think of the women from the congregation who suffered the horrific massacre and who later forgave Dylann Roof. I’m wondering how I might get to that place. I'm not there. I'm not so open and able to forgive. So I challenge myself: How can I get closer to forgiveness? I believe the best way to do that is through empathy,” Potter said.

“And I do think we need another name for forgiveness. If someone hasn’t asked for forgiveness, if they haven’t admitted to a mistake, why offer forgiveness in the first place? What we’re really talking about is grace. I use grace interchangeably with radical empathy.”

Potter hails Crayton’s work as a necessary addition to contemporary drama as it challenges audiences to do the individual work required to build stronger communities.

“We have multiple reactions to how faith influences this family's life, and how they all conflict and how they all push against one another,” Potter said. “And, in that respect, the Curtises represent every family.”

While acknowledging the themes that make this play both universal and timeless, Potter echoes Crayton that “Chasing Gods” is a story specific to an African American family and stresses the importance of acknowledging that experience. As part of a series Crayton calls the “black faith cycle,” “Chasing Gods” explores the complicated role of religion within African American communities across time and space.

“I think of myself going to a Thanksgiving dinner and sitting next to a family member who I recently battled on Facebook,” Potter said. “I don't want to talk to you. I didn't want to be in the same room with you. But it's also my family member. So how do I approach Thanksgiving, and how do we co-exist? I think we're essentially asking that question as a fractured society and a fractured community. How do we move forward? How do we get along? How do we see each other?”

Performances of “Chasing Gods” are July 12-14 and 19-21. Showtimes are 7:30 p.m., except for Sunday performances, which begin at 2:30 p.m. It will be set on Stage Too! on the stage of the Crafton-Preyer Theatre. General admission tickets are on sale at the University Theatre Box Office in Murphy Hall, by calling 785-864-3982, and online at kutheatre.com.