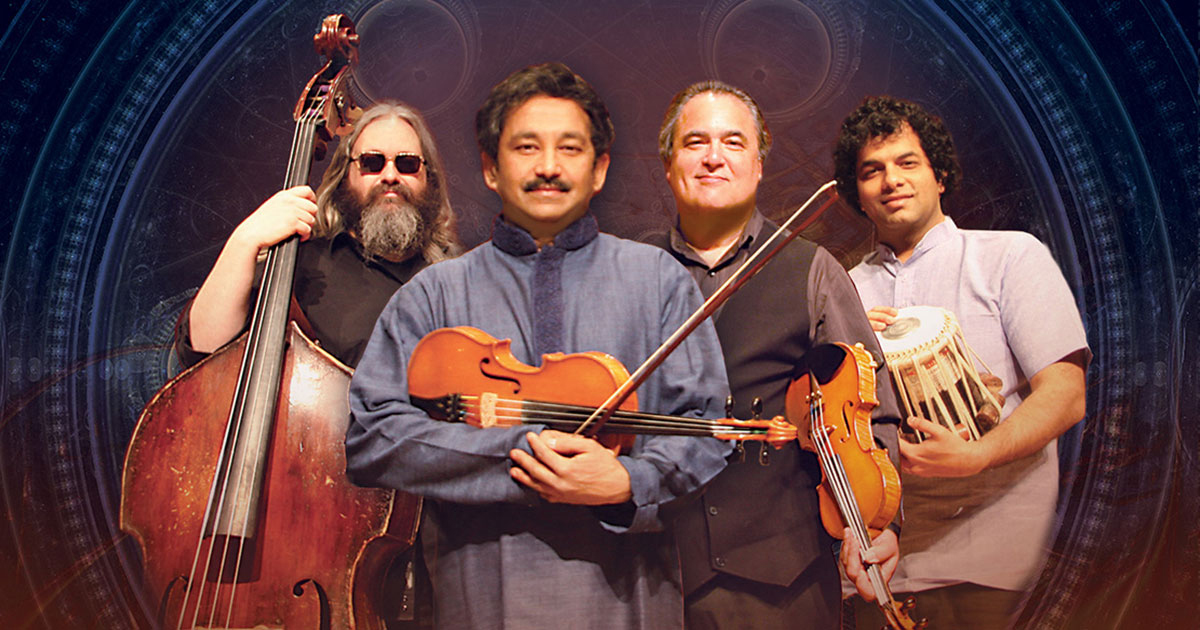 LAWRENCE – After decades of playing the violin and years as a math professor at the University of Kansas, Purnaprajna Bangere has achieved an artistic breakthrough that synthesizes his musical and mathematical skills, creating an entirely new approach to music he calls “metaraga.”

“Metaraga” (Origin Records) is also the title Bangere gave to the debut recording by his Purna Loka Ensemble, which is generating critical praise, radio airplay and even sales and chart action.

The word conjoins the Latin prefix “meta,” meaning “beyond” or “transcendent,” to the Sanskrit word “raga.” Raga literally means “colored,” but it connotes an emotional feeling and is used to describe a melodic framework for improvisation in Indian classical music.

The East-West etymology of the word metaraga reflects both the boundary-crossing, unifying nature of the music and Bangere’s own life story.

Growing up in the city of Mysore and studying under guru HKN Murthy, Bangere mastered the Indian classical violin tradition known for bridging the subcontinent’s two main musical forms – Carnatic and Hindustani. He listened, too, to Western classical music since childhood. Then, as a doctoral math student at Boston’s Brandeis University in the late 1990s, he immersed himself in American blues, jazz and rock.

He liked them all but saw them as discrete forms of music until he began to explore an approach inspired by the algebraic geometry in which he specializes as a professor in KU’s Department of Mathematics, specifically the work of great mathematician Alexander Grothendieck (1928-2014).

As Bangere explains to a layman, his system uses methods and ideas of Grothendieck to merge the seemingly disparate conceptual frameworks of Eastern and Western music using the microtonal progressions – the slides, bent notes and blue notes – of American blues and jazz, together with an array of new techniques to bridge the divides.

“Sociologically, that is a very satisfying thing,” Bangere said. “Africa is in the middle, and you have the East and the West, and it is the African American sounds which negotiate and act as a bridge between them.”

In the end, he said, this is even beyond integration, but simply another way of making music from structural elements of various genres and beyond.

He describes one of his approaches on a whiteboard, drawing a series of straight lines representing Western music that starts off as a triangle, gradually breaking down into ever-smaller segments and finally morphing into a smooth circle representing Indian music.

“I look at music from a purely structural viewpoint,” Bangere said. “I now see a certain underlying structural unity, which I did not exactly grasp before. Thanks to algebraic geometry, I'm able to find a mathematical handle to enter the musical world. And this gives rise to music without any cultural vantage point of East or West. All music is personal in the end. This is my approach.”

Some aspects of the metaraga system have similarities to Picasso’s Cubism in a structural sense, Bangere said. This conceptual breakthrough through geometry has unleashed a flood of creativity in him. He composed five of the eight tracks on the “Metaraga” album – the first songs he had ever written. The other three tracks are the group’s take on two traditional ragas and a cover of John Coltrane’s 1963 song “Alabama.”

For his astonishing rise from solitude to the highest levels in the music industry, Bangere is quick to credit his collaborators in the Purna Loka Ensemble and others at KU’s School of Music, where he now holds the title of courtesy professor. Lecturer and double bassist Jeff Harshbarger is one-fourth of the ensemble and plays on the “Metaraga” LP. The other players are David Balakrishnan (leader of the Turtle Island Quartet) on second violin and Amit Kavthekar from Boston on tabla. The dean of the School of Music, clarinetist and professor Robert Walzel, plays on the track “Alabama.” Brock Babcock engineered the October recording sessions at Swarthout Recital Hall, and Paul Dupre mastered the recording.

But it was the 2008 visit of the Turtle Island String Quartet to the Lied Center of Kansas that led to Bangere’s crucial meeting with the two-time Grammy-winning leader of that group, David Balakrishnan. Balakrishnan has now become Bangere’s collaborator, co-writing four of the “Metaraga” album’s five original tracks and playing counterpart to Bangere’s lead violin lines throughout.

In addition to the global reputation he brought to “Metaraga,” Balakrishnan gave the group its name.

“The rationale was twofold: Purna means complete in Sanskrit, and Loka means world or plane of existence,” Bangere said. “Firstly, we deal with not merely a raga structure but its avatars in various keys – in other words, a complete family of key changes. Secondly, since this came from the meta-geometric framework, and Purna is my name, he saw that it all fits together well.”

All the theory is fine, but if the musical goods were not there in the grooves of the record, none of it would matter to the public at large. Since “Metaraga” was released Jan. 17, the output of Bangere’s musical epiphany is resonating with listeners.

This month it has been featured by Amazon Music in the top 50 “Hot New Releases” in the world music category and on Bandcamp’s World Fusion page. JazzWeek magazine is charting its airplay.

And while there is 20th-century precedent for such East-West musical fusion in the work of Coltrane, the Paul Butterfield Blues Band, John McLaughlin’s Shakti and more, Bangere, Balakrishnan and others believe that the metaraga system has the potential to take it to an entirely new level.

“This is not jamming,” Bangere said. “That's the difference, because it comes from geometry that generates a grammar and a syntax.”

The metaraga system, Bangere said, allows a wider range of emotions to inspire his compositions and improvisations.

He’s excited about what the future holds and is working on new songs with Dan Gailey, KU professor of music, saxophonist and director of jazz studies. Purna has some performances this spring in Michigan. And he continues his teaching and research in mathematics, currently training two doctoral students in algebraic geometry.

So is Bangere a mathematician turned musician or the other way around?

“I prefer to be thinking outside of genres and subjects,” he said. “You just relate to the universe directly. Why do you require me to say, ‘Oh, I am a mathematician’? That means that all of the sociological force of what a mathematician should be is imposed on me. I find it a burden. I don't want it. And for example, ‘Are you an Indian classical musician?’ What does that mean? Would not ‘I am a musician’ sound better?  Would I even want to consider that? Maybe not. So what is it? A traveler flying on a bird called ‘pursuit of beauty’ and wherever it may take me in solidarity with suffering and transcendence.”