LAWRENCE — A team led by an astronomer from the University of Kansas has crunched data from NASA’s TESS and Spitzer space telescopes to portray for the first time the atmosphere of a highly unusual kind of exoplanet dubbed a “hot Neptune.” 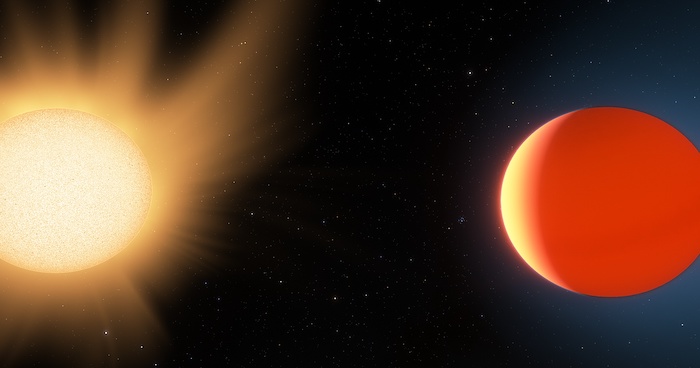 The findings concerning the recently found planet LTT 9779b were published today in Astrophysical Journal Letters. The paper details the very first spectral atmospheric characterization of any planet discovered by TESS, the first global temperature map of any TESS planet with an atmosphere and a hot Neptune whose emission spectrum is fundamentally different from the many larger “hot Jupiters” previously studied.

“For the first time, we measured the light coming from this planet that shouldn’t exist,” said Ian Crossfield, assistant professor of physics & astronomy at KU and lead author of the paper. “This planet is so intensely irradiated by its star that its temperature is over 3,000 degrees Fahrenheit and its atmosphere could have evaporated entirely. Yet, our Spitzer observations show us its atmosphere via the infrared light the planet emits.”

While LTT 9779b is extraordinary, one thing is certain: People probably wouldn’t like it there very much. 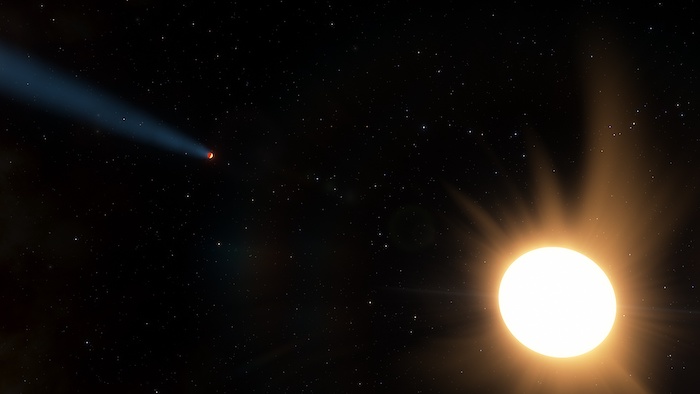 “This planet doesn’t have a solid surface, and it’s much hotter even than Mercury in our solar system — not only would lead melt in the atmosphere of this planet, but so would platinum, chromium and stainless steel,” Crossfield said. “A year on this planet is less than 24 hours — that's how quickly it’s whipping around its star. It’s a pretty extreme system.” 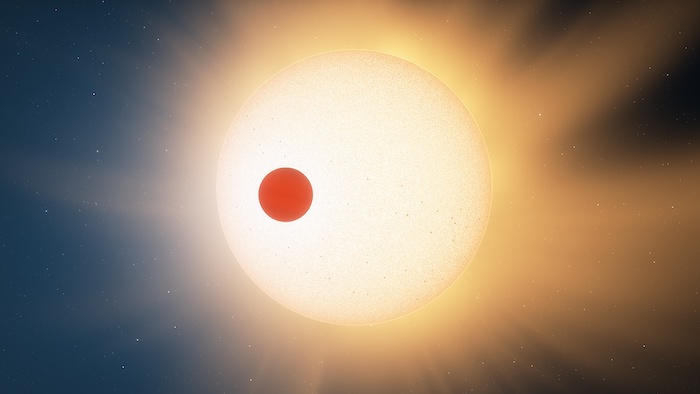 “We measure how much infrared light was being emitted by the planet as it rotates 360 degrees on its axis,” he said. “Infrared light tells you the temperature of something and where the hotter and cooler parts of this planet are — on Earth, it’s not hottest at noon; it’s hottest a couple of hours into the afternoon. But on this planet, it's actually hottest just about at noon. We see most of the infrared light coming from the part of the planet when its star is straight overhead and a lot less from other parts of the planet.”

Readings of the the planet's temperature is seen as a way to characterize its atmosphere.

“The planet is much cooler than we expected, which suggests that it is reflecting away much of the incident starlight that hits it, presumably due to dayside clouds,” said co-author Nicolas Cowan of the Institute for Research on Exoplanets (iREx) and McGill University in Montreal, who helped in the analysis and interpretation of the thermal phase curve measurements. “The planet also doesn’t transport much heat to its nightside, but we think we understand that: The starlight that is absorbed is likely absorbed high in the atmosphere, from whence the energy is quickly radiated back to space.”

According to Crossfield, the results are just a first step into a new phase of exoplanetary exploration as the study of exoplanet atmospheres steadily moves toward smaller and smaller planets.

“I wouldn’t say we understand everything about this planet now, but we’ve measured enough to know this is going to be a really fruitful object for future study,” he said. “It’s already being targeted for observations with the James Webb Space Telescope, which is NASA’s next big multibillion-dollar flagship space telescope that’s going up in a couple of years. What our measurements so far show us are what we call the spectral absorption features — and its spectrum indicates carbon monoxide and or carbon dioxide in the atmosphere. We’re starting to get a handle on what molecules make up its atmosphere. Because we see this, and because of how this global temperature map looks, it also tells us something about how the winds are circulating energy and material around through the atmosphere of this mini gas planet.”

Crossfield explained the extreme rarity of Neptune-like worlds found close to their host stars, a region typically so devoid of planets astronomers call it the “hot Neptune desert.”

"We think this is because hot Neptunes aren’t massive enough to avoid substantial atmospheric evaporation and mass loss,” he said. “So, most close-in hot exoplanets are either the massive hot Jupiters or rocky planets that have long ago lost most of their atmospheres.”

A companion paper to this research led by Diana Dragomir, University of New Mexico physics and astronomy assistant professor, investigates the exoplanet’s atmospheric composition via secondary eclipse observations with the Spitzer Infrared Array Camera (IRAC) of the hot Neptune.

Although LTT 9779b isn’t suitable for colonization by human beings or any other known life form, Crossfield said evaluating its atmosphere would hone techniques that someday could be used to find more welcoming planets for life.

“If anyone is going to believe what astronomers say about finding signs of life or oxygen on other worlds, we’re going to have to show we can actually do it right on the easy stuff first,” he said. “In that sense these bigger, hotter planets like LTT 9779b act like training wheels and show that we actually know what we’re doing and can get everything right.”

Crossfield said his peek into the atmosphere of such a strange and distant planet also was valuable on its own merits.

“As someone who studies these, there’s just a lot of interesting planetary science we can do in measuring the properties of these planets — just like people study the atmospheres of Jupiter, Saturn and Venus — even though we don’t think those will host life,” he said. “They’re still interesting, and we can learn about how these planets formed and the broader context of planetary systems.”

Crossfield said much work is left to do in order to better understand LTT 9779b and similar hot Neptunes not yet discovered. (A companion paper concerning LTT 9779b’s atmospheric composition via analysis of its secondary eclipse “spectrum” is being published concurrently, which Crossfield co-wrote.)

“We want to continue observing it with other telescopes so that we can answer more questions,” he said. “How is this planet able to retain its atmosphere? How did it form in the first place? Was it initially larger but has lost part of its original atmosphere? If so, then why is its atmosphere not just a scaled-down version of the atmospheres of ultra-hot larger exoplanets? And what else might be lurking in its atmosphere?”

Some of the KU researcher’s co-authors on the paper also plan to continue study of the improbable exoplanet.

“We detected carbon monoxide in its atmosphere and that the permanent dayside is very hot, while very little heat is transported to the night side,” said Björn Benneke of iREx and the Université de Montréal. “Both findings make LTT 9779b say that there is a very strong signal to be observed making the planet a very intriguing target for future detailed characterization with JWST. We’re now also planning much more detailed phase curve observations with NIRISS on JWST.”

Top right image: This artist's impression shows LTT 9779b near the star it orbits and highlights the planet's ultra-hot (2000 Kelvin) day-side and its quite toasty night-side (around 1000 K).

Middle right image: This artist's impression shows the LTT 9779 system approximately to scale, with the hot Neptune-sized planet at left and its bright, nearby star at right. The trail of material streaming off of the planet is hypothetical but likely, based on the intense irradiation of this planet.

Bottom right image: This artist's impression shows LTT 9779b transiting the star it orbits. This transit briefly blocks an appreciable fraction of the star's light, and is how the planet was first discovered by NASA's TESS mission.

KU in the news
The New York Times — Thu, 04/01/2021
A decline in testing may be masking the spread of the virus in some U.S. states
The Guardian — Wed, 03/24/2021
The social biome: how to build nourishing friendships – and banish loneliness
In a recent @JohnJayCollege seminar, @KUPoliticalSci prof Don Haider-Markel said that domestic terrorism “tends to… https://t.co/HNmP2jEafa
«»
Follow us on Twitter »
Why KU
Apply »
One of 34 U.S. public institutions in the prestigious Association of American Universities
44 nationally ranked graduate programs.
—U.S. News & World Report
Top 50 nationwide for size of library collection.
—ALA
5th nationwide for service to veterans —"Best for Vets: Colleges," Military Times