LAWRENCE — The Robert J. Dole Institute of Politics at the University of Kansas has announced that Maj. Gen. Diana Holland will give the Fall 2020 Elizabeth Dole Women in Leadership Lecture at 7 p.m. Nov. 12 on the institute’s YouTube channel.

“We are thrilled to have Major General Holland as our guest for this year’s Elizabeth Dole Women in Leadership lecture,” Director Bill Lacy said. “Her distinguished and storied career with the U.S. Army is an inspiration. Her lifetime of service to this country made her a natural choice.” 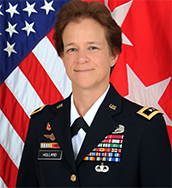 Holland graduated from the U.S. Military Academy and was commissioned a second lieutenant in the Corps of Engineers in 1990. She served in Operation Freedom’s Sentinel, Joint Task Force Sapper and Task Force Diamond in Afghanistan. She also served in Operation Iraqi Freedom. As commander of the South Atlantic Division, U.S. Army Corps of Engineers, she oversaw support to disaster-stricken states following hurricanes Irma, Maria, Florence and Michael.

In 2015, Holland was the first woman appointed commandant of cadets at the U.S. Military Academy at West Point. In that same year, she was the first woman to hold the title of deputy commander of support in a light infantry division. She currently serves with the Army Corps of Engineers as the commanding general of the Mississippi Valley Division and as the president of the Mississippi River Commission, both firsts for a woman in these appointments.

Launched in 2017, the Elizabeth Dole Women in Leadership Lecture features women who break barriers, make significant contributions to their fields and reach positions of leadership. Guest speakers are leaders who exemplify perseverance, motivation, innovative thinking and the ability to overcome challenges.

This signature series is named for former U.S. Sen. Elizabeth Dole, in honor of her long career in public service. Dole served as commissioner on the Federal Trade Commission, U.S. secretary of transportation, U.S. secretary of labor, president of the American Red Cross and a U.S. senator representing the state of North Carolina. Her career papers have been gifted to the Dole Institute Archive and Special Collections and will soon be available to researchers, students and scholars.

The Robert J. Dole Institute of Politics is dedicated to promoting political and civic participation as well as civil discourse in a bipartisan, philosophically balanced manner. It is located in KU's West District and houses the Dole Archive and Special Collections. Through its robust public programming, congressional archive, and museum, the Dole Institute strives to celebrate public service and the legacies of U.S. Senators Bob Dole and Elizabeth Dole.