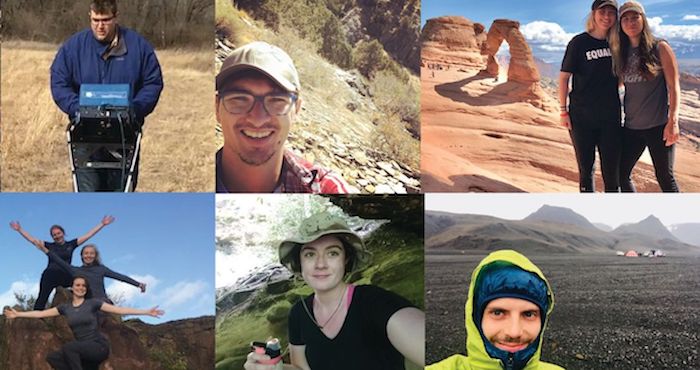 LAWRENCE — For a geoscientist, the benefits of performing fieldwork are countless. Researching in nature gives geoscientists firsthand contact with the earth’s raw materials and a chance to test ideas and develop theories — as well as to make new discoveries. For this reason, geoscientists often trek to faraway locations, negotiating difficult physical terrain and distinctive cultural landscapes to access geologic features vital to their research.

But there’s a problem: For geoscientists from minority and underrepresented populations, fieldwork can prove daunting — and even physically dangerous. Women scientists could face harassment or sexual assault; scientists with disabilities could find field sites impossible to access; racial minority researchers might face prejudice and bigotry.

But until now, no study has focused on fieldwork accessibility for LGBTQ geoscientists, in spite of obvious hazards. For instance, according to Newsweek, in 2019 there were 71 countries where homosexuality is illegal.

Recently, an investigation from University of Kansas researchers appeared in Eos, a publication of the American Geophysical Union, examining the challenges of fieldwork for LGBTQ geoscientists. Alison Olcott, associate professor of geology, and Matthew Downen, who recently earned his doctorate in geology from KU, surveyed the experience of LGBTQ scientists in “everything from wilderness treks, oceanographic cruises, and class field trips to museum and laboratory visits, trips to research centers, and attending conferences around the world.”

They found 55% of the geoscientists who identify as LGBTQ indicated they’d been in an area where they didn’t feel safe due to their identity, expression or presentation — while about a third have refused to do fieldwork due to concerns for personal safety related to their identity.

“There are many places with really excellent geological samples that might not be safe for an LGBTQ+ geologist to go travel,” Olcott said. “It’s something unrecognized in the field, by academic advisers in particular. It seemed like an unseen, unacknowledged problem in the geosciences, where we’re dependent on where the rocks are — but not everyone is equally safe to go to these places.”

The impetus for the study came from Downen, inspired by his years attending a growing LGBTQ social event thrown each year at the Geological Society of America’s conference.

“It used to just be a small dinner with maybe 10 to 15 people — but in the last few years it just skyrocketed,” he said. “One year, it was over 60 people, and not everybody could attend. I remember seeing so many new younger people, people my age. There were a lot of different identities and genders represented, and I was floored by all the incredible diversity.”

Downen wondered about the experiences of the emerging LGBTQ community in the geosciences, so he began collecting data informally for a presentation to the KU chapter of the organization Out in STEM.

“I was curious to know who really is out there and what the community really looks like within geology,” he said. “I also wanted to do this research because it’s important for people in the LGBTQ+ community in geology to know there are other people out there like them.”

Looking to improve the data, Downen and Olcott conducted a broader, more rigorous survey of geoscientists online. Their results revealed that “many of these scientists felt unseen, unheard and unsupported in their field.”

Most striking, the KU researchers found that LGBTQ graduate students in geosciences often aren’t adequately supported by faculty advisers, especially as “relative to faculty, students typically have far less control over their field site selection.” Their survey found LGBTQ graduate students (29%) are significantly less likely than professors (57%) to have opted out of fieldwork in a specific locality because of safety fears.

“In geology, usually the graduate student is doing a project based off of the adviser's main project,” Olcott said. “An adviser will likely say, ‘Oh, I have this grant to go to to a field locality and look at these examples.’ We were really struck that so many professors had not done a research project because of their identity, but it was only 29% of the graduate students. It seemed like graduate students were being put in a position where they were being made to do things where they felt unsafe, but couldn’t say no or didn’t feel comfortable saying, ‘Hey, I’m not safe here because of who I am.’”

The authors suggest institutions and mentors should provide more resources to LGBTQ graduate students in the geosciences to ensure their security in the field. “People who are advising students and leading field trips or fieldwork need to better educate themselves and be more aware of different policies or just the attitudes in a certain area,” Downen said.

Olcott and Downen said faculty mentors and institutions could provide travel guidance and resources geared to LGBTQ personnel prior to fieldwork. In the classroom, professors could confront homophobia by using inclusive language and students’ preferred pronouns. Meantime, faculty and staff should offer supportive academic advising, visible allyship and diversity training.

Both authors stressed homophobia and barriers to fieldwork aren’t limited to far-flung countries but often are faced much closer to home.

“We’re not saying North America and Europe are awesome and everywhere else is terrible for LGBTQ+ geoscientists,” Olcott said. “It’s a more granular issue — just because the place on the map is designated friendly, it doesn’t mean necessarily that way everywhere.”

“If you’re traveling globally, a world map showing where your identity could be criminalized is just kind of the most basic thing,” Downen said. “Even in the U.S., depending on where you go, it may not be friendly there, either — that’s where some LGBTQ+ geoscientists have reported their worst field experiences due to their LGBTQ+ identity.”

The study by Olcott and Downen soon will be republished in a double print-issue on “the Future of Geoscience” in Eos. In late October, Olcott presented their findings at the annual meeting of the Geological Society of America.

Top image: A collage of submitted images to Alison Olcott, associate professor of geology and co-author of an investigation about the challenges of fieldwork for LGBTQ geoscientists.

Right image: This map shows areas in the world where LGBTQ+ status is criminalized (red) or not legally protected (yellow), as well as countries in which residents do not believe the country is a hospitable place for LGBTQ populations. (Individuals in Antarctica are each covered by the laws of their own country.) Credit: Alison Olcott.