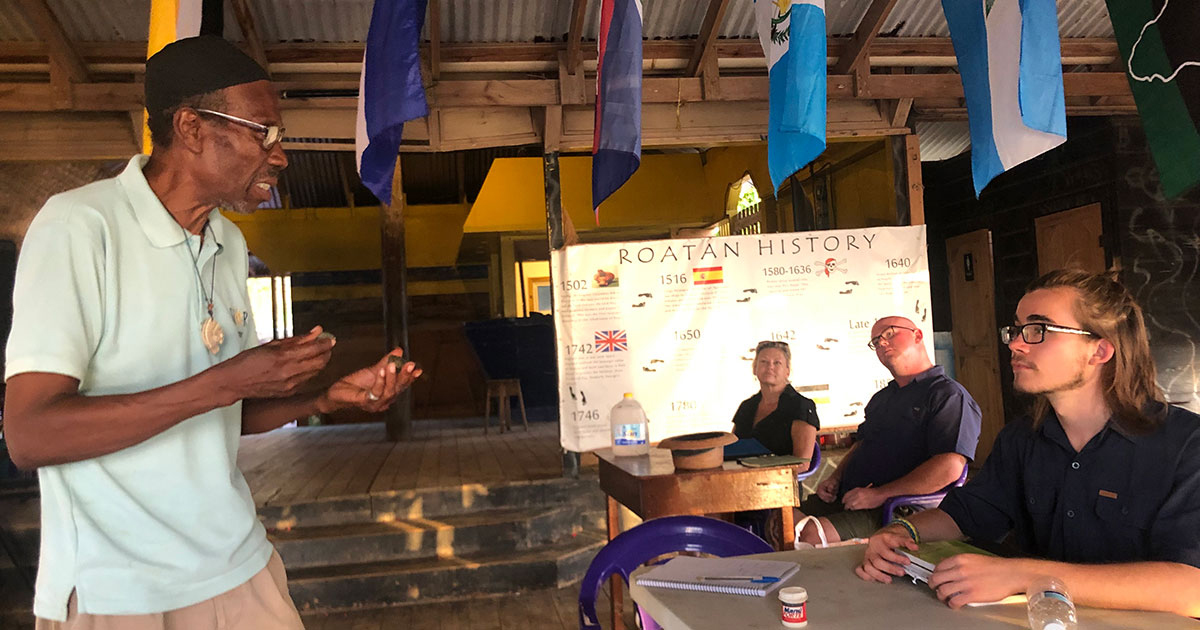 LAWRENCE – Laura Hobson Herlihy is from New Orleans, where, she says, Caribbean creolized identities are common. So the mix of cultures she found on the Honduran island of Roatán during a study trip last year seemed familiar.

Now, she and the University of Kansas students she took down to Central America have co-written a book titled “The Peoples and Languages of Roatán,” published as open-source research by KU ScholarWorks.

Herlihy, a lecturer in the Center for Latin American & Caribbean Studies, specializes in the language of the Miskitu people, whose ancestral home is on the Honduran and Nicaraguan mainland, in the area often called the Mosquito Coast. However, she noted, climate change, poverty and drug wars — the invasion of their rainforest lands by colonists and narco-traffickers — have motivated a few thousand Miskitu people to move to Roatán for jobs in the tourist industry. When the State Department in 2018 raised its travel warning for Nicaragua to the highest level, Herlihy shifted her annual summer study program to Roatán in 2019.

There, the group studied with speakers of the indigenous Miskitu and Garifuna languages, and they also noted the predominance of Spanish and Bay Island English.

These overlapping, intermarried cultural and language communities reminded Herlihy of home, including the use of the term creole, or kriol, to describe communities of mixed ethnic heritage. In Roatán, Herlihy said, the word “kriol” refers to a specific group of English-speaking Afro-descendants of mixed ancestry.

“Both places have groups that are mixed Black and white and have their own identity. They do not see themselves as Black, but see themselves as in Roatán, as English speakers, as British subjects. ... There is no one-drop rule. There is no bipolar racial dichotomy — either Black or white. It's a continuum. That's why New Orleans is like the Caribbean.”

Herlihy said her group studied with native speakers of both Miskitu and Garifuna while in Roatán, inviting members of the public to sit in on their classes and attracting the attention of the local news media.

Herlihy wrote the book’s prologue, plus its first and last chapters. The last chapter is a traveler’s guide to common conversational phrases in each of the island’s four main languages.

In addition to languages themselves, the book deals with many of the islanders’ folkloric practices. Those include plant-based health remedies, which Herlihy noted are being used to treat COVID-19 patients, to the Garifuna tradition of using dance and music to teach their language to children.

Herlihy wrote that the publication “will be useful to anyone interested in learning about Roatán, the socio-linguistic panorama of the island, or the spoken Garifuna and Miskitu languages.”

Between the two hurricanes (Eta and Iota) that hit Miskitu Coast this fall and the ongoing pandemic, Herlihy says she not sure she’ll be able to bring her summer program back to the mainland in 2021. But she remains hopeful.