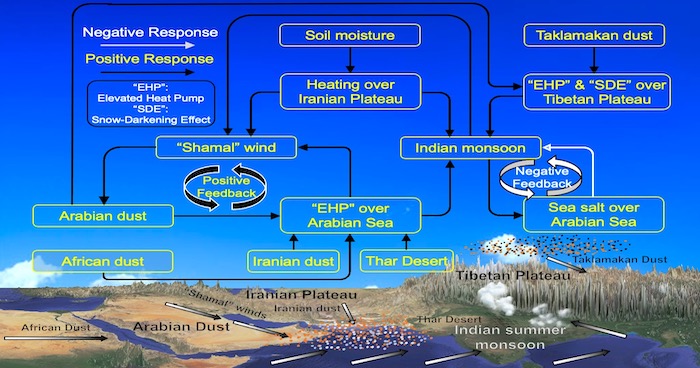 LAWRENCE — New research from the University of Kansas published in Earth-Science Reviews offers insight into one of the world’s most powerful monsoon systems: the Indian summer monsoon. The study details how the monsoon, of vital social and economic importance to the people of the region, is supercharged by atmospheric dust particles swept up by winds from deserts in the Middle East.

“We know that dust coming from the desert, when lifted by strong winds into the atmosphere, can absorb solar radiation,” said lead author Qinjian Jin, lecturer and academic program associate with KU’s Department of Geography & Atmospheric Science. “The dust, after absorbing solar radiation, becomes very hot. These dust particles suspended in the atmosphere can heat the atmosphere enough that the air pressure will change — and it can result in changes in the circulation patterns, like the winds.”

This phenomenon, dubbed an “elevated heat pump,” drives moisture onto the Indian subcontinent from the sea.

“The Indian summer monsoon is characterized by strong winds in the summer,” Jin said. “So once the winds change, the moisture transport from ocean to land will change, and consequently they will increase the precipitation. The precipitation is very important for people living in South Asia, especially India, and important for agriculture and drinkable water.”

“The monsoon can influence dust emission,” Jin said. “When we have a stronger monsoon, we have heating in the upper atmosphere. The convection associated with the monsoon can go up to a very high elevation, as much as 10 kilometers. When this pattern of air over the monsoon is heated, you produce something like a wave. Across the area, you’ll have high pressure, then low pressure, then high pressure. Those waves can transport air to the Middle East. The air comes upward over the Indian subcontinent, then goes to the Middle East and goes downward — and when the downward air strikes the surface, it can pick up a lot of dust aerosols.”

Jin’s co-authors on the paper are Bing Pu, assistant professor of geography & atmospheric science at KU; Jiangfeng Wei of the Nanjing University of Information Science and Technology in Nanjing, Jiangsu, China; William K.M. Lau of the University of Maryland and Chien Wang of Laboratoire d’Aerologie, CNRS/UPS, Toulouse, France.

Their work encompassed a review of literature on the relationship between Middle East dust and the Indian summer monsoons, along with original research using supercomputers to better understand the phenomenon.

While it has been known that an “elevated heat pump” exists due to dust coming from the Arabian Peninsula, Jin and his colleagues argue for another source in South Asia fueling the effect of aerosolized dust upon the Indian summer monsoons: the Iranian Plateau.

Jin said the paper explores three other mechanisms influencing the Indian summer monsoon. One is the snow-darkening effect, where black carbon and dust reduce snow’s reflectivity, warming the land and the troposphere above. Another is the solar-dimming effect, where aerosols in the atmosphere cause the land surface to cool. Lastly, the research considers how aerosolized dust can serve as ice-cloud nuclei, which can “alter the microphysical properties of ice clouds and consequently the Indian summer monsoon rainfall.”

The KU researcher said understanding these mechanisms and climactic effects of dust will prove to be of increasing importance in the face of global climate change.

“This is especially true for Asia — there are climate projections showing that in some areas of Asia, the land will become drier,” Jin said. “So, we expect more dust emissions and dust will play a more important role for some time to come in Asia. We have a lot of anthropogenic emission, or air pollution, in eastern China, East Asia and India. But as people try to improve our air quality, the ratio between natural dust to anthropogenic aerosol will increase — that means dust will play a more important role in the future.”