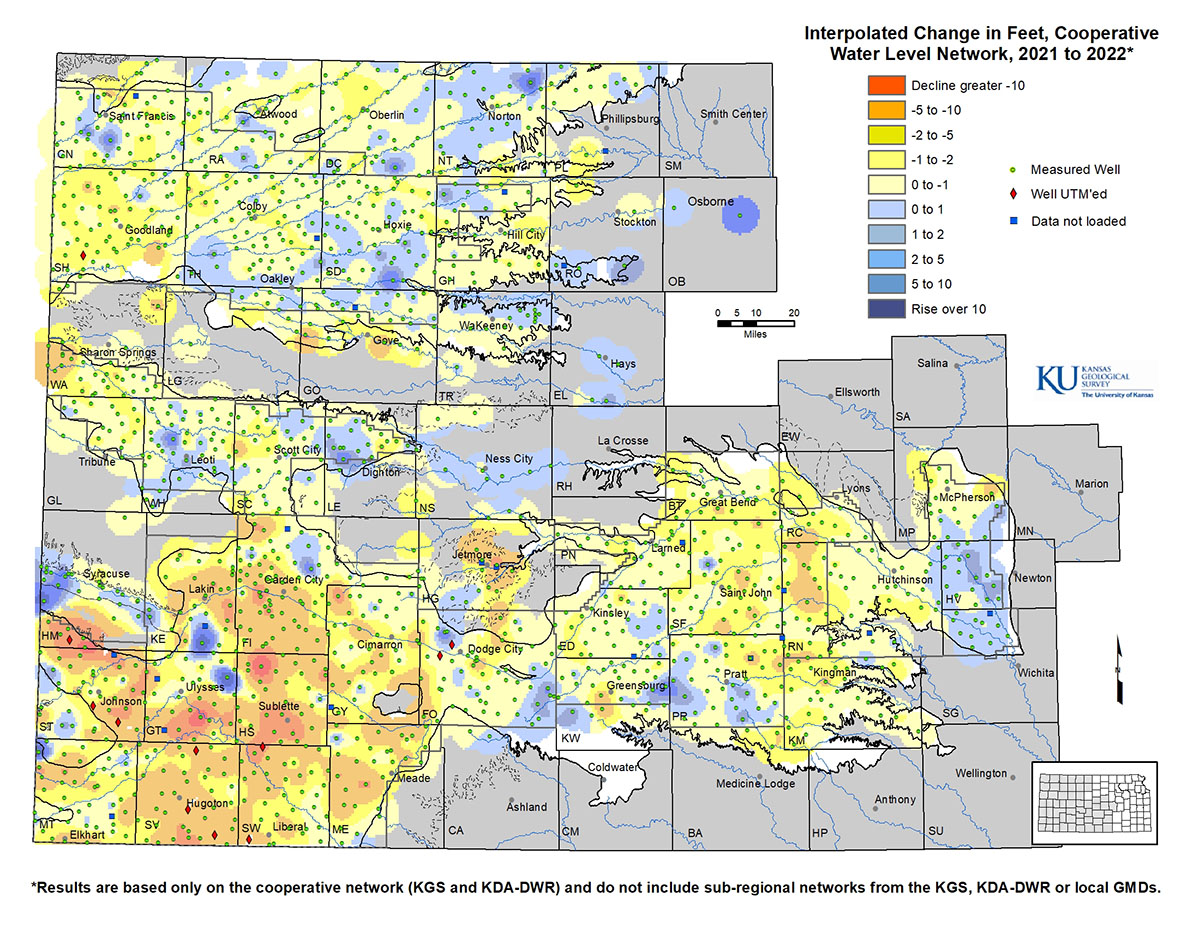 LAWRENCE — Average groundwater levels across western and central Kansas fell by more than a foot in 2021, with the greatest declines in the southwest portion of the state, according to preliminary data compiled by the Kansas Geological Survey.

The KGS, based at the University of Kansas, and the Division of Water Resources (DWR) of the Kansas Department of Agriculture measure about 1,400 wells every year to monitor the health of the High Plains aquifer and other aquifers in western and central Kansas. Those measurements showed an overall average decline of 1.01 feet last year. Most parts of the region saw below-average precipitation for the year, especially during the summer growing season for agricultural crops.

“The key takeaway is that 2021 started off very dry and, outside of the month of May, which is the last month most folks in western Kansas saw any measurable precipitation, dry conditions continued right into the summer and fall months,” said Brownie Wilson, KGS water-data manager.

The 2021 decline followed an overall drop of 0.93 feet in 2020, which was another abnormally dry year. Dry years lead to increased pumping demands, primarily for irrigation, which in turn typically cause greater declines in water levels.

“The entire state is currently in some stage of drought and even with recent snowfalls, I bet it remains that way,” Wilson said.

As of the beginning of February, virtually all of Kansas was under some level of drought conditions, based on maps published by National Drought Mitigation Center at the University of Nebraska-Lincoln, the U.S. Department of Agriculture, and the National Oceanic and Atmospheric Administration. Southwest Kansas was experiencing extreme to exceptional drought, with widespread moderate to severe drought across the rest of the western and central Kansas regions covered by the groundwater monitoring program.

The High Plains aquifer is a network of water-bearing rock that extends into eight states. In Kansas, the aquifer comprises three components — the Ogallala aquifer, the Great Bend Prairie aquifer and the Equus Beds. Of these, the Ogallala aquifer underlies most of western Kansas and consists mainly of the Ogallala Formation, a geologic unit that formed from sediment eroded off the uplifting Rocky Mountains.

The southwest Kansas portion of the Ogallala has suffered the greatest losses since groundwater levels started dropping in the 1950s. In the drought years between 2010 and 2014, declines averaged about 3 feet per year. Since 2015, levels fell less than a foot each year until 2020, which saw a decline of 1.2 feet. In 2021, the region saw an average drop of nearly 2.2 feet.

In central Kansas, the Great Bend Prairie aquifer underlies an area encompassing Great Bend, Kinsley, Greensburg and Pratt. Farther east, the Equus Beds extends from just north of Wichita toward McPherson and Hutchinson. This area typically sees more precipitation than the western part of the state. Because the aquifer is relatively close to the land surface and sandy soils are abundant, some of this precipitation recharges — or makes its way into — the aquifer. Since 1996, when the state began administrating the water-level monitoring program, water levels in this area have remained relatively stable.

Most of the wells in the network monitored by the KGS and DWR are within the boundaries of the state’s five Groundwater Management Districts (GMDs), which are organized and governed by area landowners and local water users to address water-resources issues.

The region saw below-average precipitation in 2021, with widespread areas receiving 50% to 75% of long-term averages.

“Much of southwest Kansas came out of the winter months with already below-normal precipitation levels and, outside of one month, that trend continued through the growing season and into the fall and winter months of 2022,” Wilson said.

GMD 3 includes all or part of Grant, Haskell, Gray, Finney, Stanton, Ford, Morton, Stevens, Seward, Hamilton, Kearny and Meade counties. Most of the wells monitored in the district are drilled into the Ogallala aquifer, except in a few areas where they draw from the deeper Dakota aquifer.

Dry conditions were also prevalent in the west-central and northwest portions of the state. Western Kansas GMD 1 experienced a groundwater-level drop of 0.51 feet in 2021, after falling 0.59 in 2020 and 0.14 in 2019. Declines there tend to be small but steady. GMD 1 includes portions of Wallace, Greeley, Wichita, Scott and Lane counties, where the majority of wells are drilled into the Ogallala aquifer.

Northwest Kansas GMD 4 experienced a drop of 0.51 feet in groundwater levels, after a decline of 0.70 feet in 2020 and an increase of 0.60 feet in 2019. GMD 4 covers Sherman, Thomas, Sheridan and parts of Cheyenne, Rawlins, Decatur, Graham, Wallace, Logan and Gove counties. Groundwater there is pumped from the Ogallala aquifer and shallow alluvial sources associated with streams.

In contrast to the significant declines observed in western Kansas GMDs, increases and decreases in water levels in Great Bend GMD 5 and Equus Beds GMD 2 in the central part of the state tend to even out over time. Both districts have localized areas of long-term groundwater declines but as a whole have remained relatively stable.

Big Bend GMD 5, centered on the Great Bend Prairie aquifer, experienced a water-level decline of 0.81 feet in 2021, after a decline of 0.69 feet in 2020 and an increase of 1.75 feet in 2019. Precipitation across the region ranged from average to below average in 2021. GMD 5 includes Stafford and Pratt counties and parts of Barton, Pawnee, Edwards, Kiowa, Reno and Rice counties.

Equus Beds GMD 2, a major source of water for Wichita, Hutchinson and surrounding towns, saw the smallest decline of 2021, at 0.13 feet, after experiencing the largest decrease of 2020 at 1.8 feet. Precipitation in the region came in slightly below average for the year. GMD 2 covers portions of Reno, Sedgwick, Harvey and McPherson counties.

The KGS measured 586 wells in western Kansas, and DWR staff from field offices in Stockton, Garden City and Stafford measured 224, 355 and 258 wells, respectively, in western and central Kansas. Most of the wells, spread over 48 counties, are used for irrigation and have been measured for decades with landowners’ permission.

Measurements are taken primarily in January, when water levels are least likely to fluctuate due to seasonal irrigation. The measurement results, available on the KGS Water Well Levels website, are provisional and subject to revision based on additional analysis.

The Kansas Geological Survey is a nonregulatory research and service division of KU. KGS researchers study and provide information about the state’s geologic resources and hazards, including groundwater, oil and natural gas, rocks and minerals, and earthquakes.