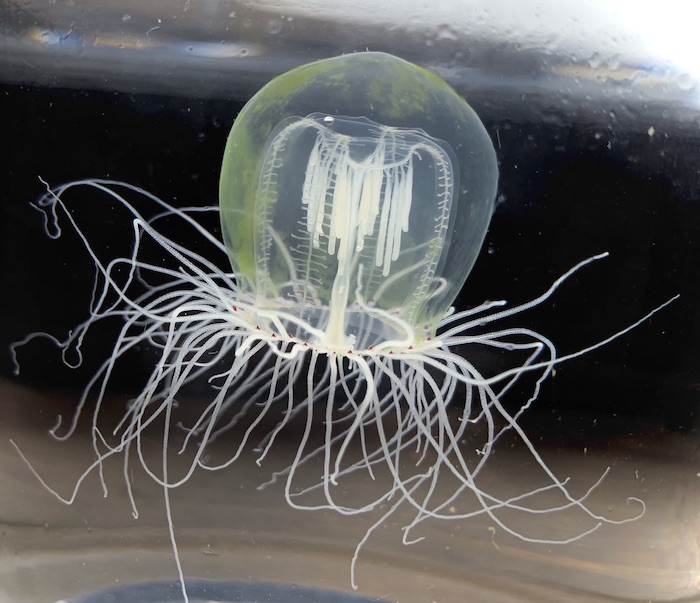 LAWRENCE — Some jellyfish have simple eyes; some have complex ones. Other jellyfish have no eyes at all. Indeed, recent research has shown jellyfish eyes in different species have evolved separately and independently many times in different ways over many millennia, making them an ideal model to better understand how the trait expresses itself genetically.

Now, a team of researchers that includes Paulyn Cartwright, professor of ecology & evolutionary biology at the University of Kansas; Maria Pia Miglietta of Texas A&M University, Galveston; and lead principal investigator Todd Oakley of the University of California, Santa Barbara, has received a grant from the National Science Foundation to study how jellyfish-eye “convergence” — duplicated events in the history of life — provides a window on how evolution works at genetic, cellular and morphologic levels.

“Eyes evolved multiple times independently within the jellyfish,” Cartwright said. “We’ve known for a while that there is not a single origin of eyes in all animals but were surprised at how many times they evolved independently in jellyfish.”

Now, Cartwright and her collaborators plan a scientific “deep dive” into evolutionary patterns to discover whether jellyfish use the same or different aspects of their genetic toolkit to build eyes every single time that they have evolved.

The researchers plan to reconstruct a detailed phylogenomic tree of Medusozoa (a clade in the Cnidaria phylum) to trace the evolutionary history of jellyfish eyes and use comparative transcriptomes and single-cell RNA sequencing to determine similarities and differences in genetic pathways of convergent eyes.

“Jellyfish are a really nice system for this, because they have a diversity of eyes, ranging from simple clusters of light-sensing cells to very complex eyes — camera-type eyes that can form images and have a lens, a cornea and a retina — so superficially, they can look identical to vertebrates,” Cartwright said.

In her KU lab, she plans to analyze many species of jellyfish to determine all genes expressed in single cells of different jellyfish eyes and find what’s shared among different instances of jellyfish and what’s changed in their basic genetic building blocks.

“Cells themselves have their own characteristics, and they’re really an outcome of many, many different genes being expressed — so sometimes we might miss an overall pattern by looking at individual genes,” the KU researcher said. “But if we look at all the genes that are expressed at the cell and what that particular outcome is, that might give us a different level of information. That’s why it’s great to look at all those different levels and see what is similar and what’s changed to really help us understand this very complicated question. Jellyfish are a great system to do this because they’re so amenable to these types of experiments. We can look at individual genes and how they’re expressed; we can look wholesale at all the genes that are expressed in those cells; and then we can see what is similar at the morphological level between those and what’s different.”

Part of the work under the new NSF grant will include travel to Panama, a hotspot of jellyfish biodiversity, to collect specimens. Cartwright and her colleagues will use the fruits of their research to construct a more detailed phylogenetic tree, or evolutionary history, of jellyfish.

“Jellyfish are very diverse — there’s a few thousand species,” Cartwright said. “Uncovering their exact evolutionary history has been really challenging in part because a lot of this diversification happened over half a billion years ago. The other challenge is to sample these organisms. Many of them live in open-ocean environments in the deep sea, and some of them are incredibly small and hard to find. So, we’re looking at ancient divergence times within a diverse and difficult-to-sample group. This has been a challenge that I’ve been working on for at least the last 20 years of my career, so we’re really excited in the age of genomics because getting more data and being able to sequence more genes and throwing more DNA sequences at this problem is expected to be very promising at resolving some of these relationships amongst Cnidarians.”

Photo: This tiny jellyfish called Polyorchis pencillatus is referred to as red-eyed jellyfish. Its multiple eyes, called ocelli, can be seen at the base of the tentacles and contain light-sensing cells and red pigment. Credit: Anna Klompen.