LAWRENCE — With a desire to find more time for writing and experiments, Orley “Chip” Taylor, University of Kansas professor emeritus of ecology & evolutionary biology, says it’s time to step aside — but not before making sure Monarch Watch, the program he founded in 1992, is well-positioned for the future. Chip and his wife, Toni, have made a $1.4 million gift to establish the Chip and Toni Taylor Professorship in support of Monarch Watch. 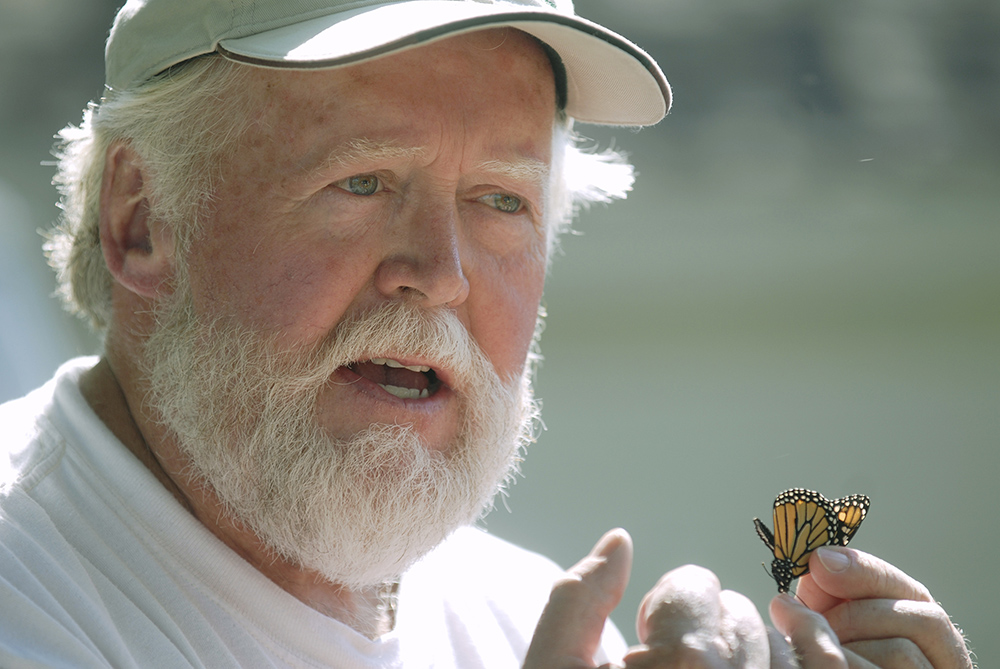 “I turned 85 in August, and I have to step away in order to find enough time to finish six manuscripts and a couple of experiments — one of which has given me an idea for a new community science project,” Chip Taylor said. “There is always something new, and even if I'm not directing Monarch Watch, I'll continue to contribute.”

Chip Taylor and Brad Williamson, a local high school science teacher, started Monarch Watch as a research project. The idea was to learn more about the monarch migration by applying tags to the monarchs’ wings. However, they knew that to get a reasonable amount of data they had to have a large number of taggers. To recruit taggers, they sent out news releases to Iowa early in the tagging season and later to Texas as well as a large number of schools in Kansas. The response was overwhelming, with more than 1,000 people volunteering to tag monarchs. With that, Monarch Watch was born.

Taylor estimates volunteers have tagged more than 2 million butterflies in the last 29 years. Of these, more than 20,000 have been recovered in Mexico. The data has proven to be a gold mine and has yielded information about the timing and pace of the migration, the success of monarchs in reaching Mexico from different regions, the effects of droughts and more.

In addition to the tagging program, Taylor and the Monarch Watch team are active in distributing milkweeds, the host plants for monarch caterpillars, through a number of programs. These efforts began as a response to the rapid decline in milkweeds that followed the adoption of herbicide-tolerant crops. To compensate for these declines, Monarch Watch initiated the Monarch Waystation program in 2005. The public was encouraged to create habitats for monarchs by planting milkweeds and nectar-producing plants in home gardens, at schools, businesses and other public places.

Today, there are more than 41,500 registered Monarch Waystations, including habitats in nine different countries, signifying the international reach of Monarch Watch. Overall, more than 1 million milkweeds have been distributed through various campaigns since 2010. The goal of these efforts has been to sustain the monarch migration.

Taylor can trace his love of nature, including butterflies, to summers spent on his grandmother’s land in Wisconsin.

“I was always growing or nurturing something,” he said. “It’s no surprise to me that the first research project I did on monarch butterflies has led to this. For me, it’s important that we sustain the monarch migration. The loss of monarchs would mean that we have lost habitats that support a large number of species ranging from important pollinators to hawks and owls. It’s all about sustaining the environment that sustains us.”

KU is currently accepting applications for the professorship that Taylor said will be critical to the program’s future success. He said the ideal candidate will have to be comfortable interacting with the press and the public, hosting events and engaging community scientists from all walks of life.

Like the fictional character Forrest Gump, Taylor and his wife invested in a little-known “fruit company” in its early days. After numerous stock splits, the couple found themselves holding shares in one of the world’s most valuable companies — Apple.

“I guess that was a pretty good investment,” Taylor said. “And investing in Monarch Watch is equally important. We need about $3 million to set up an endowed fund that will support the professorship and Monarch Watch for generations to come.  We have provided the seed money, and we hope others will chip in for monarchs and help us reach our goal.”

Those wishing to donate to Monarch Watch can visit https://monarchwatch.org/donate/ for more information.