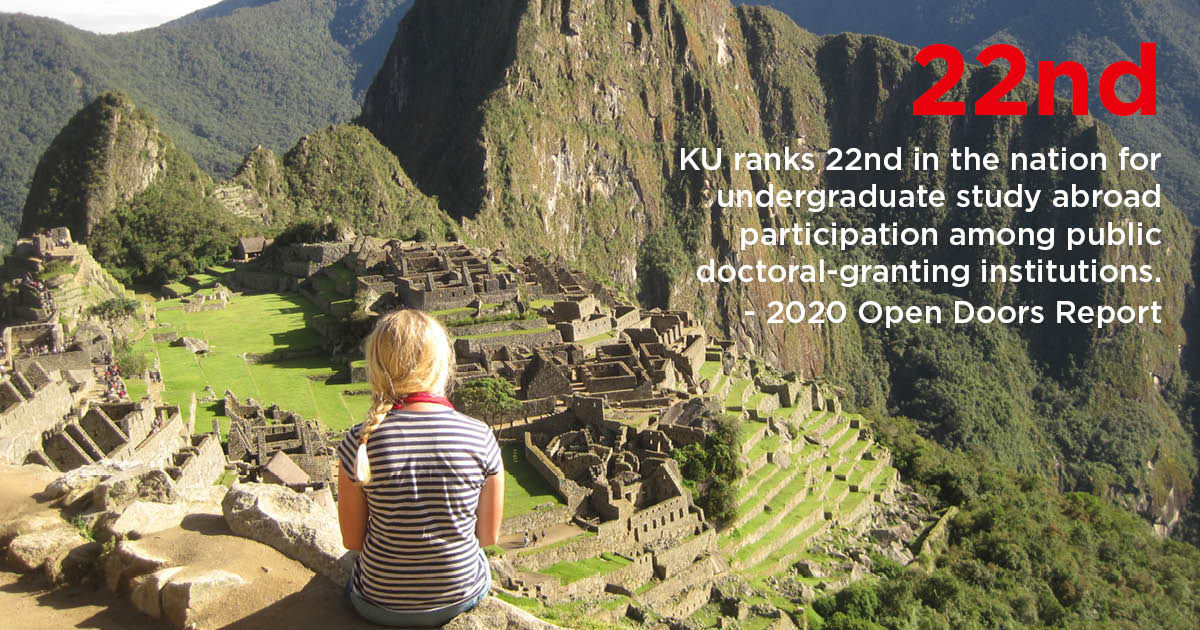 The Open Doors Report is an annual publication released by the Institute of International Education in partnership with the U.S. Department of State’s Bureau of Educational and Cultural Affairs. The report provides critical baseline data on the state of international education exchanges prior to the effects of the COVID-19 pandemic.

In the 2018-19 academic year, KU had 1,118 undergraduate study abroad students, which accounted for a 28.8% participation rate and contributed to the 22nd-place ranking among 188 doctoral-granting public higher education institutions. From the Open Doors Report released in November 2019, KU moved up one place in the rankings and had 5.7% more undergraduate students participate in study abroad.

Among all 991 reporting institutions, KU ranks 57th in the total number of students studying abroad. In 2018-2019, a total of 1,323 graduate and undergraduate KU students participated in credit-bearing international activities, including overseas study, internships/practica, and research and service programs.

The data in the Open Doors report does not include KU students who are not U.S. citizens or those who travel abroad for noncredit activities such as academic conferences, athletic competitions and performances. When domestic students participating in credit and noncredit international activities are combined with international degree-seeking students studying abroad, a total of 1,426 KU students traveled internationally as part of their academic program in the 2018-19 academic year.

According to CASSIE - the Consortium for the Analysis of Student Success Through International Education, students who participate in study abroad are 6% more likely to graduate in four years and earn a 0.12 higher GPA than otherwise similar students who did not study abroad. The positive effect of studying abroad is much stronger for students from underrepresented minorities, with four-year graduation rates improving by 11.6%.

These positive outcomes persist post-graduation as well. In a September 2020 report issued jointly by NAFSA: Association of International Educators, and Emsi, a global labor-market consulting firm, the employment and workforce benefits of education abroad include the development of soft skills such as communication, leadership, problem-solving and time management. These key soft skills and global skills are highly valued by employers and appeared in more than 31 million unique job postings in 2019.

“The correlation between education abroad and positive academic and career outcomes makes increasing student access to and participation in these experiences imperative. One of the primary goals of KU Study Abroad & Global Engagement is to grow both the number and diversity of students engaging in our programs, such that the population of students who study abroad mirrors the KU undergraduate student population across academic disciplines, student demographics and other indicators,” said Angela Perryman, director of SAGE. “Initiatives such as KU’s participation in the ACE Internationalization Lab will directly support achievement of this goal.”

Nationally, 347,099 U.S. students studied abroad during the 2018-19 academic year, which was a 1.6% increase from the previous year and marked a continuation of 10 consecutive years of growth in study abroad programs.