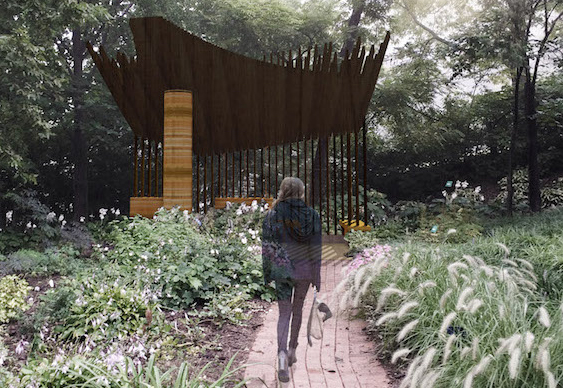 LAWRENCE — A group of University of Kansas students enrolled in the Department of Architecture’s Dirt Works Studio are putting the finishing touches on the Sensory Pavilion, a structure they designed and built in the Audio-Reader Sensory Garden. A dedication ceremony starts at 11:30 a.m. Friday, May 13. Audio-Reader’s Sensory Garden is located slightly south of the Baehr Audio-Reader Center at 1120 W. 11th St.

The project was supported by two KU alumni, Randy Austin and his sister, Colinda Austin Stailey, in memory of their uncle, Dr. Johnny P. Austin. He didn’t attend KU, but Randy Austin called him a “Louisiana Jayhawk” and said he was passionate about KU women’s basketball.

Associate Professor of Architecture Chad Kraus teaches the Dirt Works Studio. For the last five years his third-year students have designed and built structures of rammed earth, steel and timber, three of them for the KU Field Station north of Lawrence, as spring semester projects.

The Dirt Works moniker is a reference to clayey soil, a major component of the rammed-earth material used in all the studio’s structures. The locally harvested clay is mixed with a small amount of cement and water, placed in wooden forms and compacted using pneumatic ramming tools.

At the Sensory Garden, a rammed-earth column and foundation walls anchor a cedar canopy, screen wall and benches that are finger jointed into each other. Structural engineer Mike Brunin of Apex Engineers consulted on the project.

“From the very first it was clear that the mission of Audio Reader, and in particular the Sensory Garden, aligned beautifully with the principles I try to teach,” said Kraus, who regularly visited the garden with his wife and children even before the project began.

“I try to teach my students to embrace natural phenomena such as natural light and shadow, cultivating a sense of place, and paying close attention to its subtlety and nuance in order to design for a full and varied sensory experience," he said.

“It was an incredible experience to work with these talented and unbelievably hard-working students and Professor Kraus to construct such a beautiful and lasting, legacy to future visitors to the Sensory Garden,” Randy Austin said.

“The project has been a delight in many ways,” Kraus said. “I think my students would agree that spending our days working in the garden has made even the most arduous parts of the project much more pleasurable.”

“Watching the project grow from concept to completion was a fascinating process. Thanks to Randy Austin, who generously funded the project, the pavilion provides the Audio-Reader Sensory Garden with a one-of-a-kind signature element that visitors will enjoy for many years to come,” Skinner said.