LAWRENCE — Juan Felipe Herrera, the first Mexican American to be named the U.S. poet laureate, will give a talk this week for the Hall Center for the Humanities.

"An Evening with Juan Felipe Herrera" will take place at 7:30 p.m. Wednesday, Sept. 16, and will be livestreamed via the new Hall Center Crowdcast page: www.crowdcast.io/hallcenter. 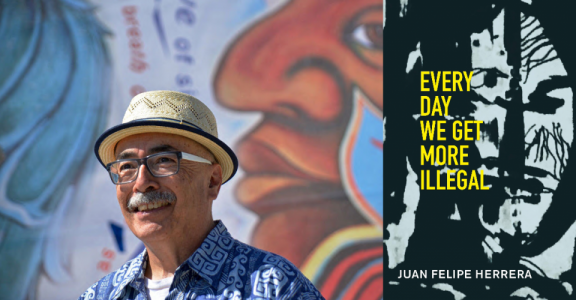 In a statement announcing Herrera as the U.S. poet laureate in 2015, Librarian of Congress James Billington said Herrara's poems "champion voices, traditions and histories, as well as a cultural perspective" that illuminate our larger American identity. Herrera grew up in California as the son of migrant farmers, which, he has commented, strongly shaped much of his work. A Washington Post article recounts that “as a child, Herrera learned to love poetry by singing about the Mexican Revolution with his mother, a migrant farmworker in California. Inspired by her spirit, he has spent his life crossing borders, erasing boundaries and expanding the American chorus.”

Herrera is the author of over two dozen books, including collections of poetry, prose, short stories, young adult novels and picture books for children, including "Every Day We Get More Illegal" (2020); "Notes of the Assemblage" (2015); "Senegal Taxi" (2013); "Half of the World in Light: New and Selected Poems" (2008), a recipient of the PEN/Beyond Margins Award and the National Book Critics Circle Award; "187 Reasons Mexicanos Can't Cross The Border: Undocuments 1971-2007" (2007); and "Crashboomlove: A Novel in Verse" (1999), which received the Americas Award. In 2014, he released the nonfiction work "Portraits of Hispanic American Heroes," which showcases 20 Hispanic and Latino American men and women who have made outstanding contributions to the arts, politics, science, humanitarianism and athletics. His book "Jabberwalking" (2018) is a children's book focused on turning your wonder at the world around you into weird, wild, incandescent poetry.

This series of events is co-sponsored by the KU Center for Migration Research. To learn more about the series, please visit the Hall Center’s webpage at hallcenter.ku.edu/migration-stories.