A School of Engineering team earned first place in the undergraduate team spacecraft transportation design competition sponsored by the American Institute of Aeronautics and Astronautics (AIAA) for their design of a Pluto space probe. Two students — Frank Bonet and Pedro Toledo — took second and third place, respectively, in the undergraduate individual aircraft design competition for their designs of a proposed replacement for America’s A-10 “Warthog” close support aircraft.

"That's mind-boggling,” he said. “The students are excellent, but it's also the quality of the faculty throughout the curriculum” that has produced so many awards.

A closer look at the awards:

Going to Pluto: The 10-student team that won the spacecraft design competition was faced with the challenges of sending a probe to Pluto, getting there within 25 years after launch and somehow doing it affordably. That’s quite a demand for a trip that’s 4.67 billion miles in length.

“It's a ways out there,” said Taylor George, of Scott City, who led the team as a senior. She’s still at KU, working on her master’s degree in aerospace engineering.

KU’s proposal: To launch the probe on an Atlas V rocket in 2031 on a trajectory that would use Jupiter’s gravity to give it a boost along the way: That method shortened the trip to just 22 years, at a cost of $3.3 billion. The proposal was lauded by aerospace industry representatives who judged the competition.

"They said it was actually a viable design to be chosen for a mission like this,” George said. “They were really impressed with our design."

George hopes to use the competition as a launchpad, so to speak, for her career.

"It's definitely something I want to do, design spacecraft,” she said. “I was a real big fan of the shuttle missions."

The team was supervised by Mark Ewing, professor of aerospace engineering and director of KU’s Flight Research Laboratory. 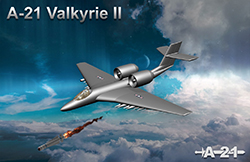 Double duty: Frank Bonet, now a master’s student in aerospace engineering, had a challenging senior year at KU. He was part of the team that won the award for the Pluto mission proposal; he also won an individual second-place award for his proposed design of the A-21 Valkyrie, an attack aircraft designed to replace the Warthog. He spent his fall semester during the 2017-18 school year designing the aircraft, then focused in the spring on the spacecraft design.

For the individual competition, students had to design an attack aircraft that could carry more weaponry and stay aloft longer than the current A-10. Bonet designed his craft with a longer wing to increase its “loiter time” over an enemy target and gave it a larger-caliber gun than the current plane carries.

“We basically did improvements on the current A-10 and put our own spin on it,” he said. “I just went with a classic attack-style aircraft when I designed it.”

Despite his individual honor in the aircraft competition, Bonet said he’s more interested in spacecraft design.

“It’s just the lure of the unknown,” he said. “It’s new and exciting.”

Bonet was advised on his entry by Ron Barrett-Gonzalez, KU professor of aerospace engineering. 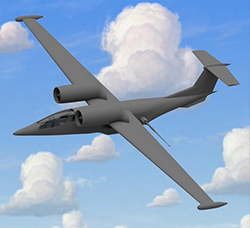 A different direction: Pedro Toledo, a native of Brazil who now lives in Lawrence, faced the same design challenge as Bonet. He took a different route: Instead of redesigning the A-10 — “It’s an aircraft basically every engineer loves,” he said — Toledo decided to design a smaller version of the much larger AC-130 gunship in order to fulfill the same mission.

His design, called the A-X Overseer, would fly higher than the current A-10, letting American pilots avoid enemy fire while conducting missions.

"Why can't I just move our aircraft higher?" Toledo said he asked at the outset. "That basically drove my design philosophy."

Toledo’s design also offered the possibility of being flown like a drone, without onboard pilots.

“This system will completely negate the need for a pilot,” Toledo wrote in his proposal. Barrett-Gonzalez was also his adviser.

The three students — George, Bonet and Toledo — said one benefit of the AIAA competition, aside from the awards, was being given the chance to synthesize the lessons from four years of undergraduate classes.

"It takes the magic black box of design and makes it clearer,” Toledo said. "This is the first time I've taken all my classes and put it all together."

"It really rounds out your education,” George added.

Bonet, in his proposal, also added acknowledgments to “the man, the myth, the legend” Jan Roskam, who revolutionized the aerospace engineering department when he arrived at KU in 1967. Students began winning awards at the AIAA competition two years later. Roskam is now the emeritus Deane E. Ackers Distinguished Professor of Aerospace Engineering, and his influence continues to be felt in the department.

Hale noted the AIAA competitions were judged by “truly eminent persons” in the aerospace industry.

KU faculty give students a broad foundation in the technical subdisciplines, he said, but it’s the students who put in the extraordinary effort to win these competitions.

"Our curriculum is deeper than most aerospace programs,” he said. “The students put it together — they have the most thorough designs because they've thought about the details."