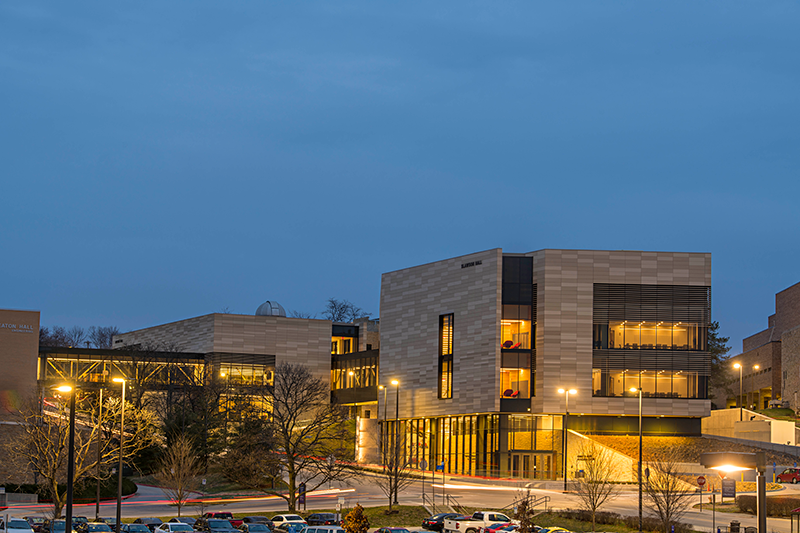 Update as of April 24: Notes new location for dedication ceremony.

LAWRENCE — The University of Kansas invites the public to celebrate the formal dedication of two new buildings on campus, Ritchie and Slawson halls, which together make up the Earth, Energy & Environment Center, located along Naismith Drive between 15th Street and Crescent Road. 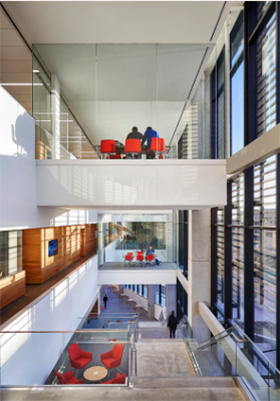 The university will host a dedication ceremony at 10 a.m. April 25 in Beren Auditorium in Slawson Hall.

The ceremony will feature remarks from Chancellor Douglas A. Girod; Robert Goldstein, provost’s special adviser for campus development; Dale Seuferling, president of KU Endowment, and Bryan Rodriguez-Colon, a graduate student in geology. The Slawson and Ritchie families, whose private gifts funded a significant portion of the project, will unveil bronze dedication plaques; then both buildings will be open for a reception and self-guided tours.

“The University of Kansas aspires to make discoveries that change the world — and the Earth, Energy & Environment Center positions KU researchers to do exactly that in areas related to energy, natural resources and the environment,” Girod said. “Thanks to these new facilities, the university will continue to be at the forefront of efforts to address challenges and create opportunities that shape our society for years to come.”

The Earth, Energy & Environment Center creates a new collaboration space for student and faculty researchers in geology, geophysics and petroleum engineering. The project was led by Goldstein, Haas Distinguished Professor of Geology, as a partnership between the College of Liberal Arts & Sciences and the School of Engineering.

“The opening of Slawson and Ritchie halls begins a transformative development for our campus with a new philosophy of integration to make a difference in the world,” Goldstein said. “Already, energy and environmental disciplines are collaborating, the sciences and engineering faculty and staff are partnering, students are engaged in learning in new ways, and the outside world is being brought in to our campus. This would not have been possible without the dedication of the donors and university leaders who made this possible. I am so grateful for their generosity.” 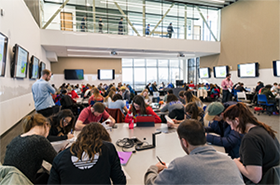 Slawson and Ritchie halls officially opened for classes, research and other activities at the start of the spring 2018 semester. The buildings encompass 141,000 square feet, and the project cost $78.5 million to build. Half of the project cost was supported by private donations. KU’s partners in conceiving, designing and building the facilities were Gould Evans, Cannon Design and Turner Construction.

Ritchie Hall, at the corner of Naismith Drive and Crescent Road, is named after KU alumni Scott and Carol Ritchie of Wichita, who donated $10 million to the project. The hall features a 162-seat auditorium with round tables and technology to facilitate in-class collaboration. It also has two 63-seat engaged learning classrooms, high-tech labs, offices and collaborative spaces. 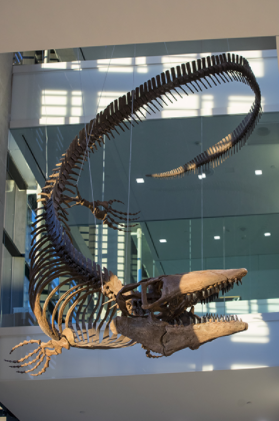 Slawson Hall, at the corner of 15th Street and Naismith Drive, is named after Donald C. Slawson, a KU alumnus from Wichita and past Kansas Board of Regents chair who died in 2014. His family made a $16 million gift for the project. The hall features the Robert M. Beren Petroleum Center – named for the founder of the oil and gas exploration firm Berexco in Wichita. The center includes a 232-seat auditorium used for lectures, training, workshops and conferences for both campus groups and industry partners.

The buildings were designed to promote integration and celebrate the geologic heritage of the state of Kansas. Open seating areas that promote collaboration can be found throughout the buildings, and most classroom and research spaces feature windows, allowing passers-by to catch a glimpse of the research and learning taking place within. Enclosed walkways connect Ritchie and Slawson halls to each other and connect the two buildings to Lindley Hall and Learned Hall, promoting easier movement and collaborative opportunities for students and faculty among the facilities. 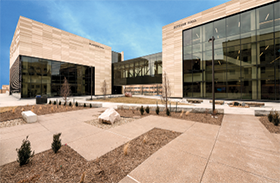 Details inside and outside the building emphasize the university’s connection to the state and its geology. A 45-foot-long mosasaur fossil hangs from the Slawson Hall atrium, appearing to dive after a fossil sea turtle. Both fossils are casts of specimens excavated in Kansas by individuals with KU connections. The mosasaur was discovered in Logan County in 1911 by KU Natural History Museum curator C.D. Bunker and associates. It may be familiar to visitors to KU’s Natural History Museum, where another cast of the Bunker mosasaur hangs from the ceiling. The sea turtle fossil was collected near Quinter in 2011 by Anthony Maltese, a KU alumnus and Triebold Paleontology curator. The mosasaur is also the Kansas state marine fossil.

Native Kansas limestone can be found throughout the two buildings. The Silverdale limestone was quarried near Winfield, in Cowley County. On the exterior, the terra cotta panels are arranged to mimic the layers of rock, or stratigraphy, found beneath the surface of the state. The facilities also feature an outdoor courtyard space, filled with a variety of boulders, many of which came from Kansas. The specimens represent nearly 2 billion years of geologic history.

The public is also invited to an open house at the Earth, Energy & Environment Center on May 5. Hands-on science activities are scheduled throughout the day from 11 a.m. to 4 p.m. More details on the day’s activities will be announced soon.

The EEEC dedication ceremony is part of two weeks of activities centered around the April 20 inauguration of Chancellor Girod. Other activities include community service opportunities, social activities, music concerts, a formal ball, and a TED Talk-style research symposium. Visit inauguration.ku.edu for a full calendar of inauguration events.