LAWRENCE — Two University of Kansas School of Engineering students are headed to Europe later this month for the finals of an international competition sponsored by Henkel AG & Co. 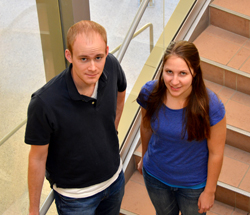 Jeff Hoffman, Overland Park, and Emily Thompson, Sandpoint, Idaho, will participate in the finals of Henkel Innovation Challenge 7 (HIC 7), set for March 30-April 3 at Henkel’s world headquarters in Dusseldorf, Germany. The company is a global manufacturer of detergents, adhesives, cosmetics and other chemical products. Hoffman and Thompson placed first in the U.S. regional competition of the challenge to earn the trip to the finals.

Teams competing in the challenge focus on one of three areas: cosmetics, adhesives, or laundry and home care. They are asked to submit an idea for a technological innovation that contributes to sustainable development and could exist by 2050. Each team prepares a presentation detailing how the product would work, how it suits market needs and how it would be advertised. These presentations are judged by a panel of Henkel engineers, recruiters and sales staff, who select the winning team to go on into the next stage of the competition.

“In many ways, the competition is set up to encourage far-fetched, science fiction-type ideas,” Hoffman said. “It’s an effort to inspire out-of-the-box thinking that can drive innovation. Creativity is as important as design, maybe more so.”

Hoffman, a fifth-year senior in chemical engineering, stumbled on the details of the competition while looking at Henkel’s website for potential employment opportunities. He brainstormed a few ideas, thought he’d hit on something that no one else had pitched, then approached Thompson, a fifth-year senior in aerospace engineering, to see if she’d be interested in partnering on the project.

“She’s really outgoing – and even though we have different majors – I know she is someone I can trust,” Hoffman said.

Thompson was up to the challenge, though initially the competition didn’t sound like it had much to do with her area of study.

“At first glance, it seemed like this would have little to do with aerospace engineering, but once I learned more about it, I could see how this technology could potentially apply to our industry,” Thompson said.

Their project focuses on improving adhesives through the use of nanotechnology. The idea is to improve the methods for how adhesives cure. Hoffman said there are currently a lot of variables to the process, which can lead to flaws.

“Our idea is to make the process more uniform and more flexible,” Hoffman said. “Our adhesive would have nanoparticles dissolved within the liquid – and when those are exposed to radio waves, they heat up. That initiates the cure from within and that’s how it sets and dries.”

After taking first place in a regional competition with more than 20 teams from around the United States – including teams from Chapman University, Stanford University, New York University and the University of Connecticut – Hoffman and Thompson face an even bigger pool of competitors at the international finals. Twenty-nine other countries are represented, including China, India, Russia, Brazil, Saudi Arabia and France.

“We’ll make a few adjustments to our presentation before we go to finals, but luckily it’s already looking pretty good,” Thompson said. “Since this isn’t part of any class, and we’re both heavily involved in our senior design projects, it’s been quite a balancing act finding time for this.  But overall, it’s been fun and rewarding."

The top three teams at the finals will receive several thousand dollars in travel vouchers, including an award of nearly $14,000 for finishing first.