LAWRENCE — A University of Kansas doctoral student in physics was selected as one of 49 students nationwide to take part in the U.S. Department of Energy Office of Science Graduate Student Research (SCGSR) Program. 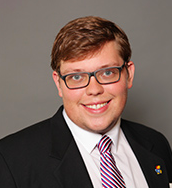 As part of the program, Sam Lane will spend seven months at the Brookhaven National Laboratory in Upton, New York, conducting research in theoretical and computational high energy physics. The SCGSR program provides supplemental funds for graduate awardees to conduct part of their thesis research at a host DOE laboratory in collaboration with a DOE scientist. The projects of selected students range anywhere from three to 12 months.

An announcement from the Department of Energy stated that the students’ projects are expected to advance the graduate awardees’ overall doctoral work while providing access to the expertise, resources, and capabilities available at the DOE laboratories.

Lane’s field of study focuses on the Higgs particle and its interactions in an effort to advance the understanding of the universe at its most fundamental level.

“The standard model of particle physics is one of the best-tested and accurate theories of fundamental particles. However, there are many things it does not explain, such as what is dark matter? What is dark energy? Why are there more particles than antiparticles in the universe? We are interested in studying these beyond standard model phenomena,” Lane said. “If we look at the content of the universe, the things described by the standard model only make up 5% of the total. If you are taking a test and you only know 5% of the material, it is a good indication to study it more.”

Lane pointed to the development of the PET (positron emission tomography) scan as an example of the long-range importance of the type of research he wants to conduct.

“We are able to use the positron, the antimatter particle of the electron, to find serious illness in the body. Antimatter was predicted around 1930, but it took decades before the understanding and ideas came to produce the PET scan around the 1970s.”

Brookhaven National Lab, where Lane will be, specializes in a handful of research themes including photon sciences, quantum chromodynamics (QCD) matter, energy research, physics of the universe and climate, environment and bioscience

SCGSR program awardees were selected from a diverse pool of university-based graduate applicants. Selection was based on merit peer review by outside scientific experts.

“These graduate student awards prepare young scientists for STEM careers that are critically important to the DOE mission,” said Paul Dabbar, DOE under secretary for science. “We are proud of the accomplishments these outstanding awardees have already made and look forward to following their achievements in years to come. They represent the future leadership and innovation that will allow American science and engineering to continue to excel in the 21st century.”

Lane, originally from Pikeville, Kentucky, earned a bachelor’s degree in physics and mathematics from Centre College in Kentucky. He expects to complete his doctorate at KU in spring 2021. Lane hopes to land a postdoctoral research position at a national laboratory before ultimately pursuing a career in academia.