LAWRENCE — Sally Buzbee, executive editor of The Associated Press news agency, has been selected to receive the 2019 William Allen White Foundation National Citation. The award, which recognizes individuals for outstanding journalistic service, comes from a vote of the trustees of the William Allen White Foundation, which is named in honor of White. 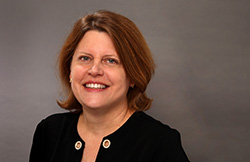 Buzbee, a 1988 graduate of the University of Kansas William Allen White School of Journalism & Mass Communications, will accept the award on William Allen White Day, which is April 11. Buzbee’s speech, set for 3 p.m. in the Woodruff Auditorium in the Kansas Union, is free and open to the public.

As executive editor and senior vice president of the AP, Buzbee oversees the news service’s global operation, which includes journalists in more than 254 locations in 100 countries.

“Sally Buzbee is an inspiration to journalists throughout the world, and her alma mater is particularly pleased with her selection as this year's recipient,” said Ann Brill, dean of the School of Journalism. “Her dedication to thorough and contextual information is a great example to our students, as is her support of local news media.”

Buzbee, who graduated from high school in Olathe, joined the AP in 1988 as a reporter in Topeka, then worked as a correspondent in San Diego. In 1995, she moved to the Washington bureau and reported on education and politics. She eventually became assistant chief of bureau, overseeing foreign affairs and national security coverage.

In 2004, she became AP's Middle East editor, directing coverage across 16 countries including coverage of the Iraq War, Iran’s nuclear ambitions, wars in Gaza and Lebanon, the Darfur crisis and tensions in the Gulf.

In early 2010, she was promoted to deputy managing editor in charge of expanding AP's Nerve Center in New York, created to collaborate on comprehensive coverage with regional and department leaders around the world. Later that year, she was named Washington bureau chief, where she oversaw coverage of the 2012 and 2016 presidential elections, the White House, Congress, the Pentagon, polling and the bureau's investigative team, which in 2012 won a Pulitzer Prize for investigative reporting on the New York police department’s surveillance of Muslims.

In addition to her journalism degree from KU, she has a Master of Business Administration degree from Georgetown University. She has two daughters. Her husband, John, who died in 2016, was also a graduate of the KU journalism school.