LAWRENCE — Two alumni have established a new scholarship to honor a former University of Kansas School of Engineering professor who died in 2014.

Brian and Helen Burke recently gave a gift to establish the memorial scholarship fund in architectural engineering, named for Tom Glavinich, who served as a full-time faculty member from 1992 until his death. He specialized in teaching power systems analysis.

"We really wanted to do something to honor him, and it just worked out really well,” said Brian Burke, who attended KU from 1987 to 1992,  earning his bachelor’s degree in architectural engineering. He is now the director of energy engineering at New York University, overseeing the university’s efforts to make its campus carbon neutral by 2040. His wife, Helen, earned her bachelor’s degree in architecture from KU in 1994 and is now director for M Moser Associates in New York. 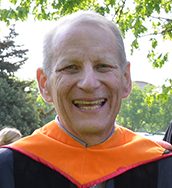 Glavinich’s long association with the university began as a student in the 1970s. After earning his undergraduate degree in electrical engineering from KU in 1976, Glavinich worked for a number of prominent firms in the Kansas City area, including Black & Veatch, Burns & McDonnell and Hallmark/Crown Center Redevelopment Co. He also earned a Master of Business Administration from KU, a master’s degree in electrical engineering from the University of Missouri and a doctorate in engineering from KU in 1990. At KU, he was a H.O.P.E. Award finalist in 2008. He received the Bradley Award for Excellence in Teaching from the School of Architecture, Design & Planning in 1999 and the Gould Award for Distinguished Service to Undergraduate Education from the School of Engineering in 1995.

"I think my first class with him was in fall of 1989,” Brian Burke said. "He wasn't just teaching out of the book. He could always give an example from experience that he had encountered."

"I think the strength of the architectural engineering program was that it always combined theory with the real world," he said. "Dr. Glavinich was the embodiment of that. He really loved what he did, and that came through. It's hard to get students excited about power systems. He did it."

The Burkes’ gift through KU Endowment creates an endowed scholarship; awards to students will be funded from the interest that accrues on the main fund. The fund will be used to provide scholarships for students majoring in architectural engineering — with a preference for a student interested in the study of power systems — in the Department of Civil, Environmental & Architectural Engineering.

"If anything, we hope this encourages somebody to go into power systems,” Brian Burke said. “But we also want to help students — tuition has increased quite a bit since we were in school, so every little bit helps."

Along the way, too, they hope to honor Glavinich.

“He made such a difference in my education and my career, so we thought it was fitting to set this up," Brian Burke said. "There are quite a few students I think would say, ‘Dr. Glavinich made a difference to me and my career.’”