LAWRENCE – Images of rotting, flesh-eating zombies familiar to fans of "The Walking Dead" are far removed from the Haitian folklore that inspired the term. But the different Hollywood and Haitian versions of zombies are an example of how different cultures interpret ideas of death, dying and the afterlife.

Through cultural concepts such as the Haitian zombie and Mexico's Day of the Dead, Peter Haney, assistant director for the Center for Latin American and Caribbean Studies at the University of Kansas, explores with students the circulation of ideas about death and death-in-life in the Americas in a course titled “Life, Death and the Living Dead."

“We are interested in how ideas like the zombie and the Day of the Dead move across borders and how they change as they move,” Haney said.

Linked to beliefs brought by African slaves, the Haitian version of the zombie is of a soulless, walking corpse under the control of a voodoo master. It’s a concept, Haney said, that can be viewed as an allegory for slavery.

“The whole idea of the zombie enters U.S. popular culture through travel literature written during the U.S. occupation of Haiti and then becomes popular in movies and radio,” Haney said.

The U.S. occupation lasted from 1915 to 1934. During that time, Americans learned of the concept of zombie from William Seabrook’s 1929 book, “The Magic Island.” A few years later, in 1932, the first full-length zombie movie, “White Zombie,” came out. Inspired by Seabrook’s work, the film was set in Haiti with Bela Lugosi playing an evil voodoo master who transforms a young white woman from the United States into a zombie.

In 1937 while researching Haitian folklore, author Zora Neale Hurston had an encounter with a zombie, whom she photographed. And more recently, Wade Davis, a Harvard anthropologist, claimed to have found a scientific explanation for how people could appear to die and then come back from the dead.

The very different zombie widely portrayed in popular culture today begins with the 1968 movie “Night of the Living Dead.”  After 1968, a year of crisis and popular upheaval all over the world, zombies in American culture lost their exoticism and no longer followed orders of a master.

“I think we have come to associate zombies so closely with movies inspired by ‘Night of the Living Dead’ that after the '60s, the word zombie for Anglo-Americans lost its connection to Haiti, although there is still a strong current of exotic literature that makes its way into anthropology journals, men’s magazines and other media,” Haney said. 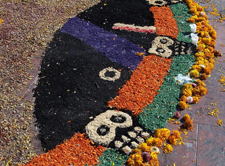 Although the zombie has lost its connection with its Haitian origins in the American imagination, the Day of the Dead has lost none of its connection with Mexico on this side of the border. Haney’s class explores how the Mexican tradition has come to be celebrated differently in the United States than in its communities of origin. The Mexican tradition, which focuses on honoring deceased relatives, centers on families visiting cemeteries. For three days on Oct. 31, Nov. 1 and Nov. 2, the participants believe the spirits of departed ancestors visit the earthly world, providing a chance for relatives to pay homage to them.

In the United States, the event honors Mexican heritage and culture. Day of the Dead celebrations are often held in art galleries and schools.

“One of the things that Day of the Dead does in the United States is to provide a way for ethnic Mexicans to present themselves to their neighbors,” Haney said.

Haney notes that the cultural exchange of ideas isn’t one-sided. He points to countries in Latin America that have begun to celebrate the American concept of Halloween and trick-or-treating, partly in response to foreign companies’ efforts to market costumes and candy.

“Looking at people in Mexico taking up Halloween and people in the United States celebrating Day of the Dead, and you ask yourself what is going on,” Haney said. “How is it that ideas are moving from one context to another, and how do they change?”