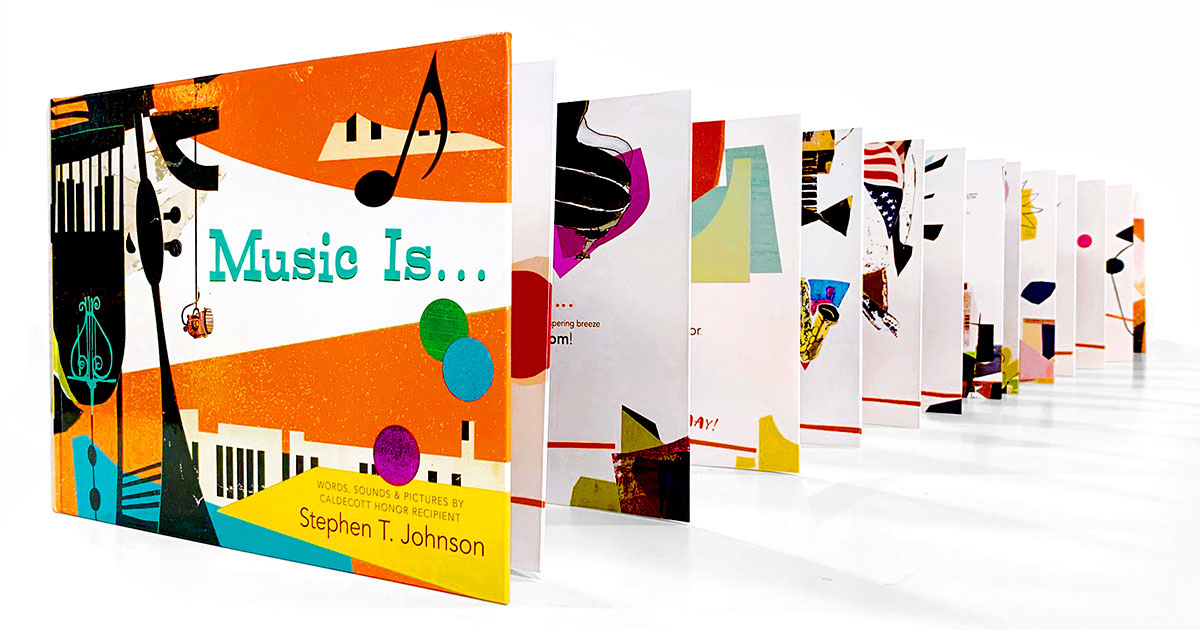 LAWRENCE – In the case of Stephen T. Johnson’s new children’s book, “Music Is ...” (Simon & Schuster), form preceded function. The idea for accordion-style pages was the crucial catalyst for Johnson’s thinking, according to the Caldecott Medal-winning lecturer in the University of Kansas School of Architecture & Design.

“There was another book idea that I worked on for years, and it was always in an accordion format,” Johnson said. “And through numerous permutations, my editor eventually said, ‘Your text and ideas sound more like a music book.’ What should a music book look like for young readers? And what does it need to say?”

“Music transcends borders, cultures, politics, divisiveness and age. Music is a bridge to joy and reflects our humanness and nourishes our souls, for we are all connected through sounds, rhythm and heart,“ he said. “I wanted to convey this idea, and the accordion format allowed for the book to exist in two parts. On the front side — illustrations accompanied by simple, onomatopoetic sound phrasing and narrative pastiches. On the back side — condensed summations of each genre with related instruments and songs, musicians and composers.”

Unfolded, the book stretches to over 23 feet.

Johnson is musician as well as a highly accomplished visual artist. He played lead guitar in high school and college-age rock bands, including, he noted, KU’s 1982 Hashinger Hall Battle of the Bands. And yet he said the highly personal and expansive subject of music was a challenging task to put into words and art. That was so, even though he has written and illustrated several previous children’s books like “A is for Art” and “My Little Red Fire Truck” (Simon & Schuster/Paula Wiseman Books, 2008 and 2009, respectively).

Johnson is a wide-ranging artist and designer, with important, large-scale public art credits using mosaics as well as books and gallery shows on his resume.

His 1996 Caldecott Honor book “Alphabet City” (Viking, 1995) was a wordless A-B-C book, capturing surprising letter forms in a sometimes gritty, photorealistic illustration style. It was named Best Illustrated Book of the Year by The New York Times and featured in its entirety on ABC-TV’s “Good Morning America.”

It’s far different from the impressionistic “Music Is ...”

“My working methodology is perhaps akin to being an actor/director/producer/screenwriter all at once — whatever the demands are to make the narrative come alive is the challenging and exciting aspect of creating children’s books.” Johnson said. “I have to adapt and change until my vision comes into focus. At times, it may require learning a completely new visual language.”

While he is arguably knowledgeable about both art and music, Johnson consulted with nearly two dozen other experts from academia and beyond on everything from narrowing it down to 10 genres of music to illustrate (blues vs. rhythm & blues; world music or not?) to which songs he would cite as representative.

The result of those consultations is mostly found on the back of each of the 10 two-page topical spreads, which Johnson styled as “Supplemental Material and Author’s Notes.” Each spread includes a short essay and a list of the typical instruments used in each form, and it cites a handful of prototypical songs and inspiring quotes by musicians.

The front of each genre spread is taken up by Johnson’s semi-abstract illustration, inspired by Joan Miro and 1950s jazz album covers paired with his onomatopoeic verbiage. A wavy orange line meanders through the entire book beginning as a musical note and ending as a lovely surprise that conceptually ties the whole idea together.

Ultimately, Johnson said, it’s designed as an introduction and appreciation of musical styles for 4- to 10-year-olds.

“Yet, I always write and design my books for all ages and aspire to give them a sense of timelessness,” Johnson said. “I believe there's enough content here that makes it interesting to anyone at any age.”

For younger children, the author said, “It's important to read the text out loud. Thus, one hopefully finds a musical cadence to which the reader can embellish and improvise by exaggerating the rhyming words and rhythms of my text. That’s when the individual’s style comes in. Perhaps what’s most rewarding to me is when a child uses my book as an impetus to explore new rhythms and musical styles, eventually creating something of their own, and then they play, play, play!”