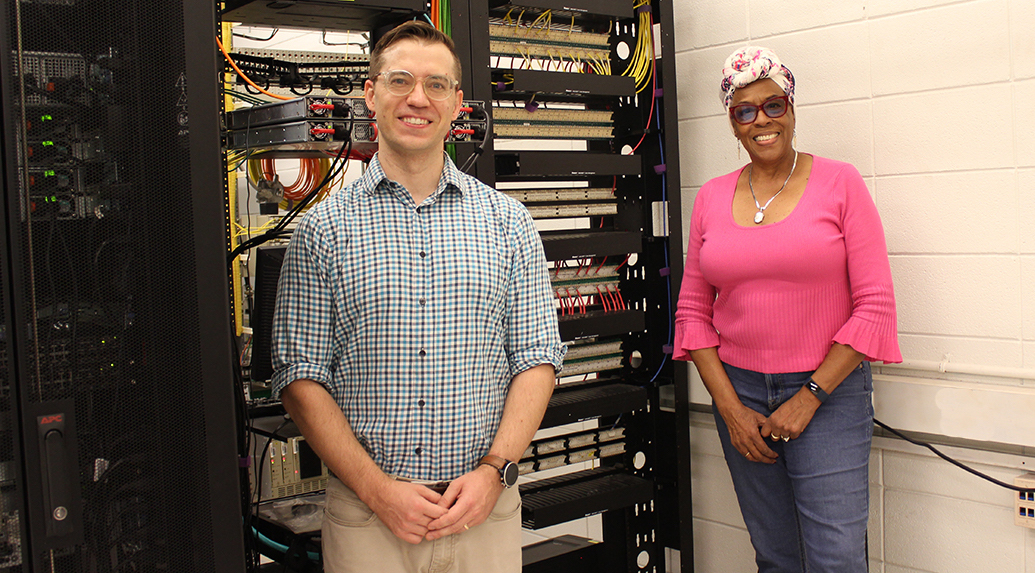 “I went back and said, ‘What book can I give them that makes more sense than Morrison?’ Her linguistic and narrative patterns can be hard for the average reader,” said Graham, a University Distinguished Professor of English at the University of Kansas and founder of its Project on the History of Black Writing (HBW). “I was writing people asking, ‘Is there a book similar to Morrison’s, but doesn't really read like Morrison?’ We had lots of dialogues about it, and I did a survey. Now, a year later, we read Morrison because there was a lot of hoopla about her, and they wanted to be in the flow. But it took a while to read books that had some of the same themes to prepare them to read Morrison.

“That's just one story, but what it said to me was I had to be the conduit for discussions of what to read. We're now creating machine-learning capacity to deliver that information — to say, ‘Here are more books like that, that do some of those kinds of things, that you might want to read.’”

A “Novel-Generator Machine,” a computer tool that will do exactly that, is one of four web-based “portals” proposed by Graham and funded by a newly announced $800,000, three-year grant from the Andrew W. Mellon Foundation.

The three-year grant will result in the future blnet.ku.edu (for Black Literature Network), a multimedia web platform that will be the access point for all users.

Graham’s collaborators on the grant are Drew Davidson, assistant professor in KU’s Department of Electrical Engineering & Computer Science and a member of its Information & Telecommunication Technology Center (ITTC); KU alumnus Kenton Rambsy, now assistant professor of English at the University of Texas-Arlington; and Kenton Rambsy’s brother, Howard Rambsy II, a professor of literature at Southern Illinois University-Edwardsville. KU Libraries are also providing support for the project.

It’s the latest extension of Graham’s HBW project, which she brought with her from the University of Mississippi to Northeastern University and then to KU in 1999. The first stage was to identify and save physical copies of books by Black writers from destruction. The next was to digitize them. And now the organizers are creating tools that will allow both academic researchers and the general public to look at the entire corpus of Black fiction, which HBW has been collecting for nearly 40 years, by using keywords, themes, data visualizations and in other ways that Davidson termed “metadata.”

To Graham, it’s a way to keep Black writers from continually falling into obscurity and even further behind in the age of Big Data.

“We have been doing this kind of work in Black fiction for a long time,” Graham said, “and a lot of people don't have what we have. We only know a very small percentage of the Black fiction that exists. Most works, including some of the most influential ones — often innovative and trendsetting — remain untaught and underread for reasons that we know too well.

"Since we’ve been at KU, our growth has depended upon amazing students whose introduction to interactive technologies pushed HBW forward. This is the first opportunity we have had to go back to some of those former students, now scholars in their own right, and say, ‘We can finally finish what we started.’”

Another grant from the Mellon Foundation to HBW last year seeks to help HBW incorporate its texts into the HathiTrust Digital Library, a major online database for literary academics, but one that Graham notes charges a substantial annual membership fee. The new grant will create a website open to all, even as it honors copyright holders. And the grant-funded work will help HBW and the English department train scholars to work in the new and growing field of digital humanities, Graham said.

“We've been working on this partnership that we have with Drew and ITTC for a while,” Graham said. “We keep saying, ‘Why do we have to go someplace else to store our stuff? Why can't we build what we need here?’ In fact, if KU researchers actively promote interdisciplinarity, then let’s put that to the test.”

“This project is all about taking these digital assets and not just making them easier to find,” Davidson said, “but also surfacing interesting aspects of the work. Just dumping a list of titles on the screen isn't really going to cut it, in terms of access. So what we need to find is where there are interesting details within the books about the authors, and the networks that connect Black writers over time. And this is another case where we're using a lot of different levels of expertise to try and get at this question. There's a part of this grant called the Data Rangers, one of Kenton Rambsy’s inventions."

Davidson said teams of students will be searching through the texts and manually annotating important details.

"So it's an educational opportunity for them," Davidson said. "We see this project as being not just a service to the users who are looking for the data, but also a service to our institutions. Students will help populate the dataset. We’ll use students to help program the site itself, and we're going to use students to test the thing, as well.”

“The Data Rangers fills a notable void by creating a community where scholars can hone their tech skills while also being able to focus on Black literature exclusively,” Kenton Rambsy said.

Graham said the prospect of the grant-funded work can help KU recruit students, especially at the graduate level, something she said that HBW has been pretty good at doing.

“We see this as innovative computer science as well as serving the digital humanities,” Davidson said. “We are going to develop new machine-learning algorithms, and we don't know what patterns we'll find yet. We think that we will be able to better surface the answer to the question of ‘What speaks to you in this literature?’”

Graham said HBW continues to value its partnerships as a venue for further public outreach. Working with Howard Rambsy II and SIUE’s IRIS Center, the grant will fund production of a series of podcasts titled “Remarkable Receptions,” audio narratives concentrating on popular and critical responses to prominent African American writers.

Davidson summed up the effort with a comparison to some of today’s digital heavyweights.

“We want to make personalized recommendations — something like a really focused Amazon.com for Black literature — but also provide new ways to engage with the work, something like The Pudding’s visual essays,” he said.