LAWRENCE — An at-home COVID-19 test developed by researchers at the University of Kansas is moving toward commercial production.

“We've been talking to venture capitalists and large existing companies to help facilitate this translation that is taking the test out of the laboratory and moving it into the marketplace,” said Steven Soper, a Foundation Distinguished Professor with appointments in the School of Engineering and Department of Chemistry. “We’re doing this in a very accelerated fashion.” 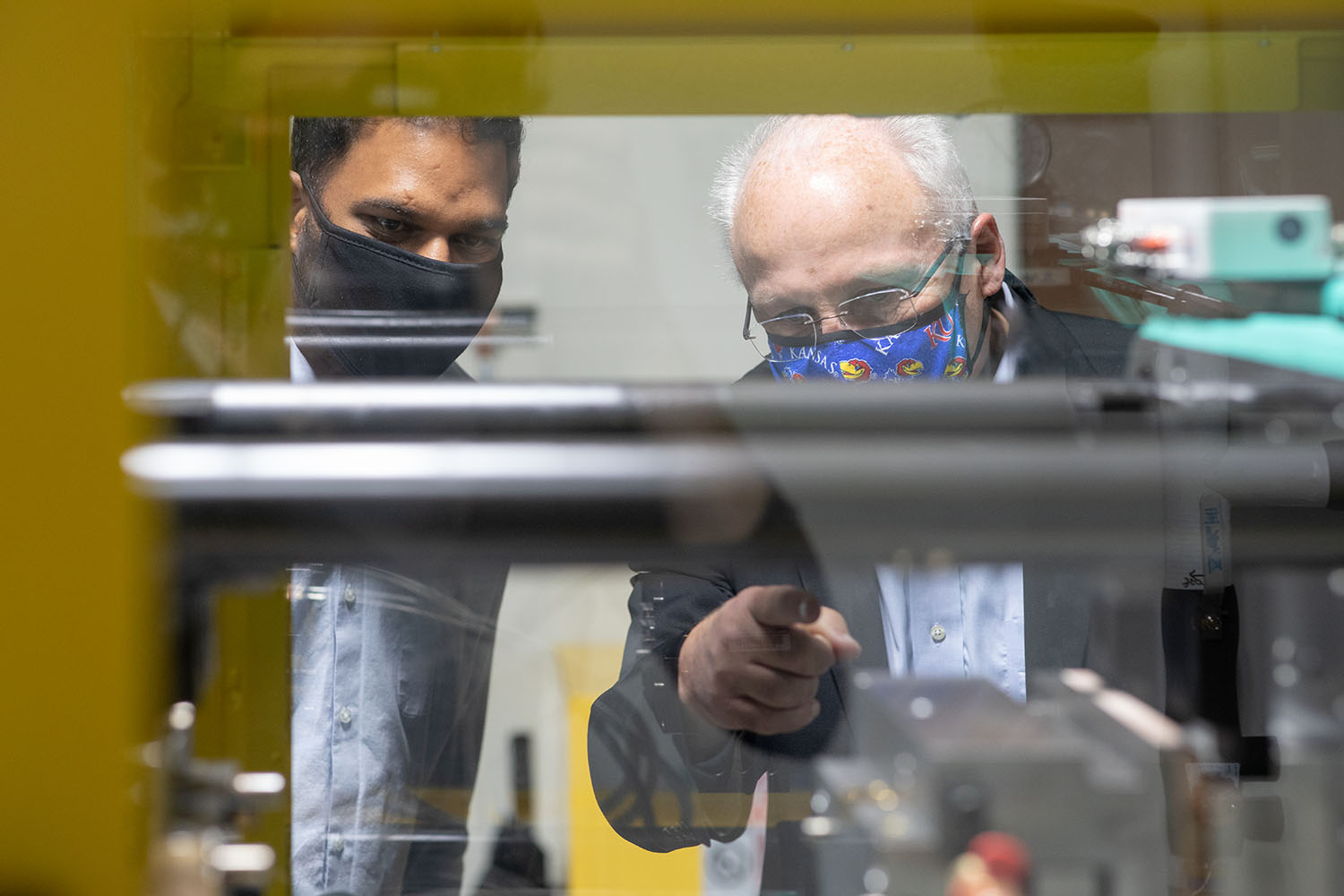 Soper’s team, which includes a half-dozen graduate students in bioengineering and chemistry, has been working on the project since early June. They have been repurposing “lab on a chip” technology he had previously developed to give doctors simple tools to more easily and quickly diagnose conditions ranging from stroke to a variety of different cancers so that it could be used to select SARS-CoV-2 virus particles directly from saliva samples and count them one at a time. At-home users would put saliva on the test chip, then use a hand-held electronic reader — about the size of an iPhone — to analyze the results. The whole process would take around 15 minutes.

Getting that test into the hands of users requires a big effort, however.

“We have to develop millions of chips that are used to analyze the saliva samples and look for these virus particles that give rise to COVID-19,” Soper said. “And then we have to manufacture the hundreds of thousands of the handheld units that are used to accommodate the chips and make the measurements and do this in a fully automated fashion appropriate for home use.” 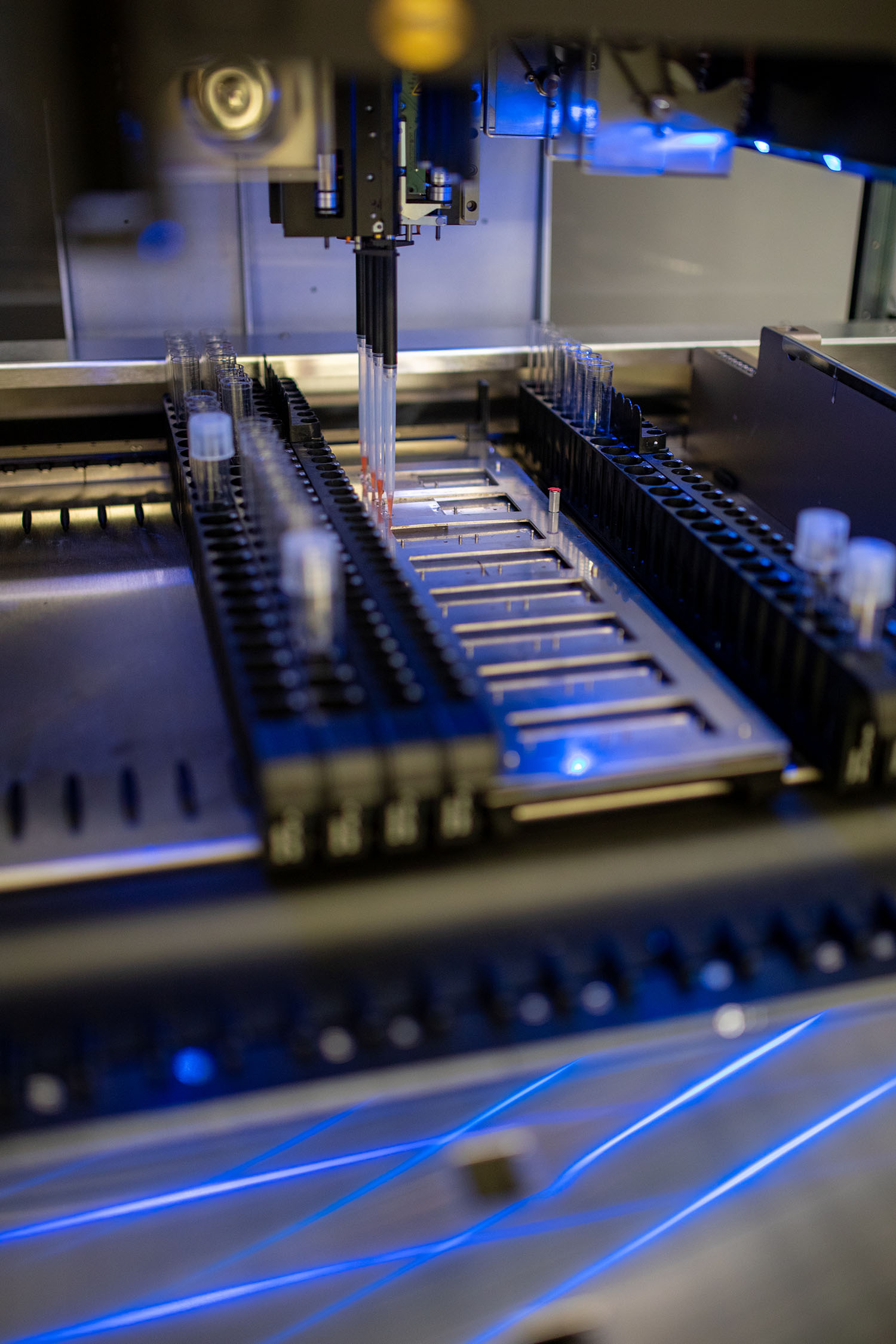 He added: “Moving it from the laboratory into a commercial platform is not an easy endeavor. I would argue it's kind of easy to do this in the lab, but to take this into the home, to let anyone use it, takes a tremendous amount of planning.”

To that end, Soper’s group — including his private company, BioFluidica — is now planning with two commercial companies with experience in large-scale medical manufacturing to produce the chip consumables and the handheld units. Users would be able to buy a test for about $10 and the reader, which can be reused many times over, for about $50. The project will also require emergency use authorization from the FDA; the aim is to begin production and distribution by the beginning of the fourth quarter of 2021.

By that time, vaccination of Americans for the COVID-19 virus should be well underway, but Soper said he has been told by experts that the need for rapid testing to continue for up to two years. The test would also come in handy wherever groups of people gather, he said, such as schools and sporting events.

"Is testing going to still be necessary? Absolutely,” Soper said.

One lesson from the pandemic, he said, is that America needs to be better prepared to respond to future pandemics by building up a stockpile of devices that can be easily adapted to test for new viruses. 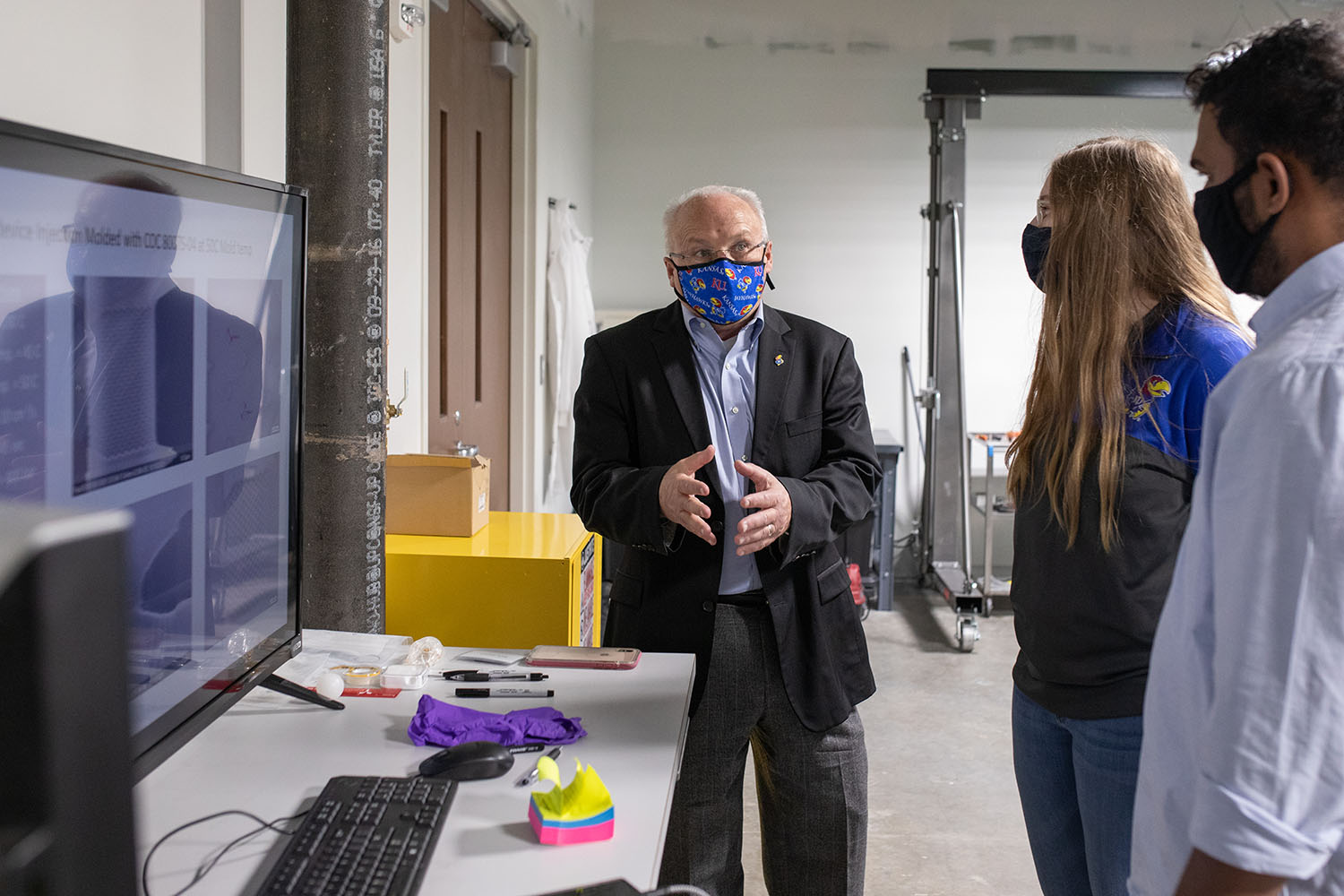 “We have to have high testing capacity for future pandemics,” he said, noting the world had already experienced several widespread epidemics — including the H1N1 influenza outbreak of 2009 — during the 21st century.

Soper earned his doctorate in bioanalytical chemistry from KU in 1989 and returned to the university as a faculty member in 2016. He brought along his company, BioFluidica, which previously created new products to help doctors test for various types of cancers, including breast, colon and prostate cancer. Funding to develop the COVID-19 test comes from the National Institutes of Health RADx Program.

Photos: Steven Soper, a Foundation Distinguished Professor with appointments in the School of Engineering and Department of Chemistry, is leading an effort to develop a quick-turnaround COVID-19 test that can be used at home. Soper’s team, which includes a half-dozen graduate students in bioengineering and chemistry, is repurposing “lab on a chip” technology he had previously developed to give doctors simple tools to more easily and quickly diagnose conditions ranging from stroke to colon cancer. Credit: Meg Kumin, KU Marketing Communications.