LAWRENCE — A University of Kansas professor is leading an effort to develop a quick-turnaround COVID-19 test that can be used at home. 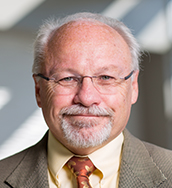 “Eventually, our test will go into a home — like an early pregnancy test at home,” said Steven Soper, a Foundation Distinguished Professor with appointments in both the School of Engineering and Department of Chemistry. “Anyone could do it.”

Soper’s team, which includes a half-dozen graduate students in bioengineering and chemistry, is repurposing “lab on a chip” technology he had previously developed to give doctors simple tools to more easily and quickly diagnose conditions ranging from stroke to colon cancer. The goal is to get the new test to market “sooner than later, of course.”

“We’re well-versed in this,” he said.

The test uses a small plastic chip — about 38 by 42 millimeters — that contains 1.5 million tiny pillars, just 10 microns wide and 50 microns tall. Each pillar contains a piece of ribonucleic acid that “recognizes” a protein found in the COVID-19 virus particle. 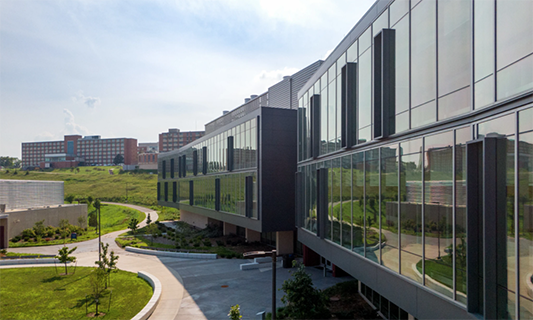 “When we flow saliva through this forest of pillars that have on the chip surfaces, this DNA molecule will look to bind to the virus particle,” Soper said. The chip will then be exposed to blue light, which will release the RNA-virus bound particles from the pillars and funnel them through a hole just 200 nanometers wide — creating an electrical signal that lets users see if they have the virus.

That sounds complicated. For the user, though, taking the test will be very simple.

“You take a saliva sample, you put it in the chip, and the chip does the processing,” Soper said. The whole process, including results, should take around 15 minutes. Current tests — including one used by KU — involve multiple steps, require a trained operator to implement the test and need an hour or two before results are available.

“I think most students want to contribute to society in terms of research. If we can actually find something that would help a lot of people, that would mean a lot to us,” said Swarnagowri Vaidyanathan, a doctoral student in bioengineering who is working on the project.

Other graduate student team members include Katie Childers and Zheng Zhao, both in bioengineering, as well as chemistry students Uditha Athapattu, Sachindra Gamage and Thilanga Nandana. Maggie Witek, associate research professor of chemistry, and Lulu Zhang, a postdoctoral chemistry student, are also working on the project.

“They basically stopped everything they were doing on their dissertation work to get this done,” Soper said. “Hats off to the graduate students. They’re working like crazy to get this done.”

The next step in the process is to conduct clinical trials of the test between now and the end of the year in order to obtain approval from the U.S. Food & Drug Administration for widespread use. Once that happens, Soper said, “It’s a matter of manufacturing and getting it out to the market.”

Soper earned his doctorate in bioanalytical chemistry from KU in 1989 and returned to the university as a faculty member in 2016. He brought along his company, BioFluidica, which previously created new products to help doctors test for various types of cancers, including breast, colon and prostate cancer.

The new test, he said, will be adaptable for other viruses that come along in the future — and also to detect illnesses from cancer and radiation poisoning. “We can reprogram the chip so it can be used for other applications,” he said. “There’s many applications for our test, not just COVID-19.”

Soper said the University of Kansas is well-positioned for this kind of effort. A nanofabrication facility opened in Gray-Little Hall a year ago, which enables researchers to create the advanced tools used in the COVID-19 test.

“That’s provided the infrastructure, and that was a big investment by the university,” Soper said. “KU has the resources that we need to move this whole thing forward.”