LAWRENCE — The University of Kansas debate squad won the National Sweepstakes Championship as the top program in the country for the 2018-19 season from the Cross Examination Debate Association. The top ranking is based on points accumulated by teams at tournaments throughout the season. 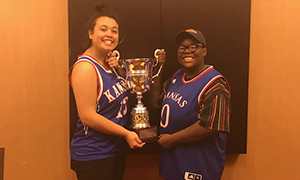 This is the first time KU has won the overall national CEDA points championship. KU also received the Founders Award from the CEDA organization for being the top program in the country in total points over the past 20 years.

“This award is special because it is a reflection of the depth of talent and the hard work of the entire debate squad,” said Scott Harris, the David B. Pittaway Director of Debate. “Every member of the team contributed to this award, and this was a remarkable season.”

KU debaters competed in 591 debates at 21 tournaments across the country over the course of the season, and 21 different KU debaters advanced to the elimination rounds at a tournament.

The season included many highlights:

“We want to thank all of the students and coaches for their hard work that made this success possible,” said Brett Bricker, associate director of debate.