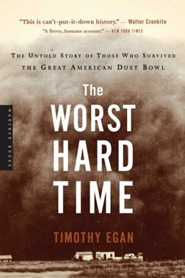 "Next year's common book is particularly relevant, as our state was hard hit by the drought of the 1930s and continues to address issues related to climate and land use," said Gray-Little. "Looking back on the Dust Bowl provides important lessons that can inform our current research into sustainability and our mission to build healthy communities."

"The Worst Hard Time," winner of the National Book Award, is the second book selected from a process that reviewed 125 nominated books submitted by more than 140 members of the KU community earlier this year. A selection committee made up of students, faculty and staff recommended the book for 2013-14 concurrently with their recommendation of Notes from No Man's Land for the current academic year, providing additional time for departments and campus organizations to integrate the book into their plans for 2013-14.

The selection committee praised Egan's use of personal stories to tell the story of one of the nation's first large-scale ecological disasters. In their recommendation, they noted the book "tells the stories of the people who stayed, the parents, grandparents and great-grandparents of people living in Kansas today. Egan follows the lives of real individuals — Native Americans, Hispanic ranchers, homesteaders, Volga German immigrants — in Kansas, Nebraska, Oklahoma, New Mexico and Texas. Egan challenges readers to think critically about the causes of the Dust Bowl, individual and national responses, and the modern legacy of this era."

Additional information on KU Common Book is available online. During orientation next summer, incoming freshmen will receive a copy of The Worst Hard Time and be encouraged to read it prior to the beginning of classes in August.

Programming for KU Common Book will be integrated into Hawk Week 2013, including Convocation. Author Timothy Egan will visit the Lawrence campus early in the fall semester. The program is part of the Office of First-Year Experiences, located in Strong Hall.

Nominations for the 2014-15 KU Common Book are now being sought from the KU community.

"Our Common Book is an important part of welcoming freshmen to campus, generating discussion on an important subject and exposing them to the type of engaged learning they will experience at KU," said Gray-Little. "As a campuswide activity, the entire community can participate in that discussion. I look forward to discussing "The Worst Hard Time" with our new students in August, and to welcoming Timothy Egan to campus."